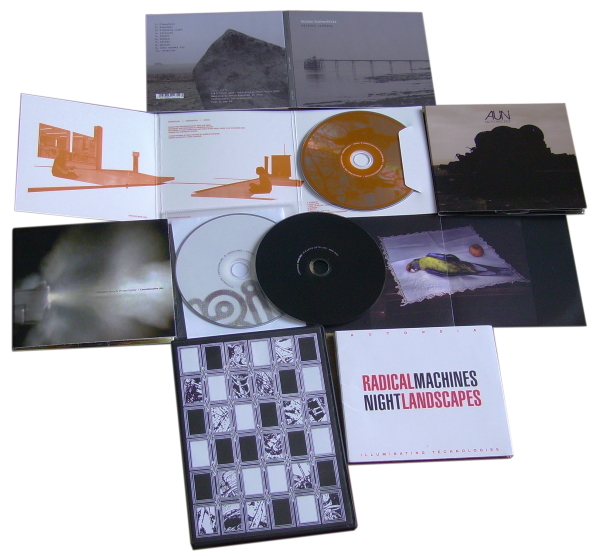 Kai Mikalsen of Norway has spent three years assembling acousticks (EndofhuM-04), working under his Kobi alias, and he has invited many fellow musicians to collaborate and help shape the results. These include Michael Duch, Rie Qiao Li, Anla Courtis and the mysterious Tore Honoré Bøe – the latter a member of the Origami Arktika collective, which also numbers Mikalsen among its ranks. The CD, packed in a sombre DVD box with a black grid pattern, is filled with the sort of long-form drones the Norwegians do best; slow, dense, eerie, rain-sodden and strewn with opaque ambiguities at every corner. All the music is rendered through layering mixtures of electronics, tape loops, everyday objects and field recordings. “You’ll probably experience music never heard before,” states the press release with equanimity.

AUN, also known as Martin Dumais of Montreal, has impressed us before with a brace of CDs for the ORAL label called Whitehorse and Blackhorse, equine-themed releases of dark ambient murmurings that were released back to back to create the musical impression of a centaur, and expose something of the desperate yin and yang situation that Canadians often find themselves positioned within. On his new release Motorsleep (ALIEN 8 RECORDINGS ALIEN80), at first hearing the emphasis seems to be on the “sleep” rather than the “motor”, which isn’t to say these “ambient doom” recordings are somnolent drifters – rather, they will invade your oneiric consciousness with all the skill of Caligari’s somnambulist, and ensure that your dreams are as troubled as those of René Magritte’s Reckless Sleeper. Dumais’s guitar work is buried and burnished by a large quantity of processors and effects to create his unsettling suggestive music.

French electronicist and laptopper Sébastien Roux has thrown in his lot with the visual artist Vincent Epplay to create an intriguing concoction called Concatenative Mu (BROCOLI 005). Many claims are made for the influence of so-called “plunderphonics” on this bricolage-styled record, and the name of John Oswald is supposed to crop up more than once in the mind of listeners, but so far I’m finding this a lot more entertaining than many of the recordings associated with that micro-genre. The rapid-fire edits are tempered with long, mysterious electronic drones that meander as strangely as purple worms in the back garden of the mind, and everything is layered in a multi-dimensional cross-talking melée that gives the ears plenty of work to do. The cumulative effect leaves you feeling sort of lost, distanced and confused (in a good way). Even the track titles get in on the act, nonsensical cut-up phrases littered with full capitals and unexpected asterisk-symbols everywhere; my favourite of these is track 07, “KOOL BOTTOMS”.

Autopsia sent his new release Radical Machines Night Landscapes from Prague (ILLUMINATING TECHNOLOGIES IT 0010), a joint venture recorded with Achtar. I’ve had a lot of time for Autopsia since hearing The Berlin Requiem from 2006; this new one may lack the ultra-tight structure of the Berlin suite, but instead its very disquieting and discordant tones, executed with the composer’s customary precision and deliberation, work their way under your carapace in unseen and unknown ways. The front cover is decorated with stark red and black typography worthy of the Dadaists; inside, Autopsia has somehow managed to insert himself directly into a photograph from the past, such that his name appears on posters in a room inhabited by serious-looking men in grey suits; they could be radical artist-activists of the 1930s, or atomic scientists at a secret conference. Overlaid across the image is a teeth-clenching text that draws parallels between machines and death, trying to make us understand the secret role of machines in shaping society’s perceptions of reality. A solid hour’s worth of precisely-calibrated doom.

Melancholy of a different sort pervades the beautiful cello work of Hildur Gudnadóttir. On Without Sinking (TOUCH TONE TO:70), this Icelandic genius plays a cello manufactured by David Wiebe, who presumably built it from stainless steel and watered it with the bitter tears of all the disaffected races and tribes of Europe. Hildur’s playing is suffused with compassion and emotion, yet it’s also rather relentless – as though she can’t stop playing until the entire miserable narrative is recounted, in every painful detail. Fear not, because your sense of humanity can only be enlarged by the experience. She also plays zither and adds voice, and is aided in places by Skuli Sverrisson, Jóhann Jóhannsson, and Guoni Franzson; the track titles aren’t giving much away either, referring in oblique ways to geographical features or meteorological aspects.

Three new releases were sent by composer and Room 40 label owner Lawrence English. Tenniscoats are the duo of Saya and Ueno, who offer us their very measured and considered minimal performances on Temporacha (ROOM40 RM 436), performing every stroke with the unassuming grace of a Japanese vase-painter. Fabrique (ROOM40 EDRM420 CD) is a compilation of 18 artists, drawn from an Australian music festival of that name, which ran for eight years from 2001. The selection encompasses an international range of performers, including Keith Fullerton Whitman, Scanner, DJ Olive, Greg Davis, Leighton Craig, Pimmon, Tujiko Noriko and many others. The curators of Fabrique were clearly not out to shock or amaze the listener with wild extremes; indeed, you will probably find most of this gentle, drifty music quite relaxing and soothing. Lawrence English issues the admonitory It’s Up To Us To Live (SIRR-ECORDS SIRR 0032), seven tracks of quite fascinating and thickened sound; the occasionally-melodic electronic music is supplemented with hazy guitar plucks and strums, the latter sometimes delivered by the pink digits of axe-wielding Benjamin Thompson. This moving music is far less wispy than we usually associate with the minimal Lawrence, with track titles that hint at missed opportunities and pleas for compassion in a friendless world. If we fail to hear his call for a renewed humanity, perhaps we’ll end up like the dead birds that are painted on the covers with such unforgiving detail by artist Marian Drew; beautiful in appearance, but lifeless. The image of the dead parrot (no Monty Python jokes please), arrayed without explanation on a white napkin with a single apple, is particularly affecting.