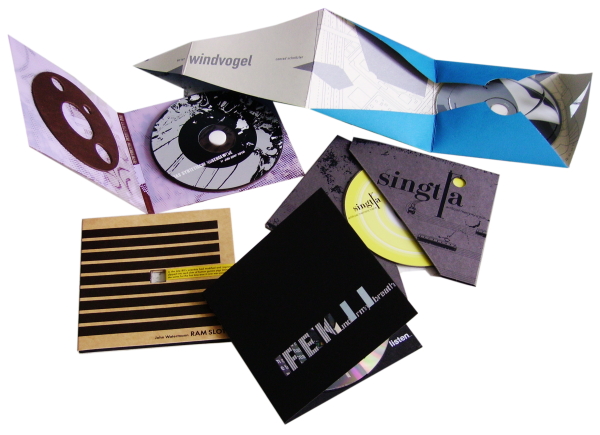 We noted the very fine Waystyx label in Moscow last year, with a copy of a record by Illusion Of Safety, sent to us by Dan Burke himself and containing some powerfully mind-sapping throb-metallo-werks on a disk packaged inside very elegant fold-out slivers of embossed and printed cardboard. I recall thinking that if cigarettes were distributed in similar packages, we’d all be addicted to nicotine within six weeks. Well, Waystyx have just sent us five more recent-ish releases, indicating that when it comes to design, they push out the Volga Boatman on just about every package that passes through their hands – just scan the image above for the merest indication of the visual and tactile pleasures that can be glommed from these eye-catching unusual fold-outs and slippery plasticated eels. Musically, many significant contemporary avant-gardists are represented on the roster, and it’s clear this is a high-quality art label. Many thanks to Tamara for sending these.

Das Syntetische Mischgewebe is here with La Vida Pour Appui (WAYSTYX 42), 25 quite short tracks sequenced into a quiet and baffling patchwork in the manner that seems to characterise the working methods of this wayward refusenik European composer. He’s determined to keep everything veiled and mysterious, never once even admitting what we might be listening to, nor where we’re supposed to position ourselves while doing so. This quietly grunting hog of a disc arrives in a sturdy acetate gatefold printed with violet and brown gestural smears, halftone dots and calligraphic wipes, while disk itself is sandwiched between two brown rubber rings that might once have been spare parts from a car. Half an hour of listening later, and I’m also ready for admission to that same psychic junkyard!

Artificial Memory Trace has Singtra (WAYSTYX 45), whose cardboard wallet (decorated with trams and tramlines) has been neatly sliced across the diagonal to reveal the bright yellow traffic light within. Buy a ticket for this particular trolley-ride and you’ll be in for 24 minutes of minimal pulsing and glistening music, rendered with precision and intense concentration by its mysterious creator. Slavek Kwi recorded trains in Prague in 1994 then reprocessed them ten years later to create this extremely marginal music, which can either induce existential despair, or a form of ascetic rapture in the brain. End of the line, folks.

PBK reveals dark inner leanings of his shrouded mind with Under My Breath (WAYSTYX 35), a full-length CD of extremely varied noises – rattlings, phased drones, heavy throbs and gas jets, layers, distorted voices, digital delay, angelic choirs and mangled synthesisers. Not a single track passes by without conveying certain grisly and creepy sensations of imminent death or disaster, while the lyrical track titles allude to bones, skin, meat, children, fire, air and all the matter in the cosmos refracted through this grim prophet’s all-seeing eye. His mystic messages are so secret they are printed backwards on the inside of the front cover, but can be read by positioning the silver CD so it acts as a mirror. Cover is also die-cut with small rectangular holes, allowing us to peer into PBK’s fevered brain as if through the bars of a prison or a sewer grating. “I lived beyond extinction so far,” he claims, and who dare gainsay that outlandish boast!

Windvogel (WAYSTYX 44) is an impressive 15-track gasp of electronic puffery music from the great Conrad Schnitzler, renowned German experimenter who fell under the influence of Joseph Beuys and was associated at the very roots of “kosmische” musik in the 1970s, as founder member of Tangerine Dream and Kluster. This excellent suite of music sees Con making a welcome return to the focussed, mesmerising genius of his early limited-press art gallery LP releases such as Rot or Blau, using computer rhythms and snaky-burring synths with the precision of a neuro-surgeon. Amazing fold out sleeve, all blue one side, unfolds into a shape like the hull of a super jet fighter plane, printed with intriguing blueprints on its underbelly. On the disc, a muscular young man is flying a kite and perhaps thus harnessing wind-power as an alternative energy source.

John Watermann‘s Ram Slot (WAYSTYX 66) is an exceptionally vivid collection of full-blooded noise, bellowing melodies, tape loops, distorted voices and found tapes – in fine a pot-pourri of electro-acoustic experimental techniques, all filtered through a powerful and visionary imagination. A tiny slip of yellow paper holds the box-cover together, printed with a tiny message suggesting a fantastic science-fiction future where a RAM slot was inserted by scientists into the necks of human beings, making it possible to “record and store dreams as they actually occurred during sleep”. Watermann’s take on this theme has much strength and diversity; the very beautiful “Did you see it”? features a sumptuously beautiful melody of celestial music, constantly interrupted with violent and abrupt noise jolts to simulate the effects of a restless dreamer’s mind. Other tracks dip one toe in the ocean of nightmares, including ‘Liberty Wounds’, which relentlessly replays a list of horrible flesh injuries, long past the point where we’re comfortable with it. Powerful surreal stuff; the record was originally issued on Nightshift Records in 1990, presumably in very limited quantities. I’ve been keen to hear anything by this German film-maker and sound artist ever since the release of Epitaph For John, a compilation of tribute music on the Korm Plastics label; the current generation of avant-bruitists are in awe of Watermann, and it’s not hard to see why.