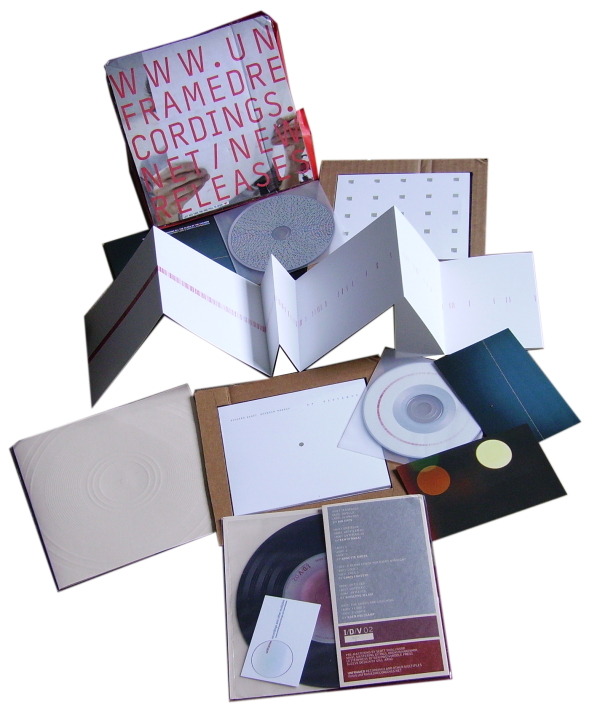 Take a gander at these…they all come from the Brooklyn-based Unframed Recordings label. As soon as I opened this box I felt we were in for some great examples from the thinner end of the sound-art wedge…what struck me was there appears to be some overlap with the Winds Measure Recordings label – some of the same names appear on the roster, and the sleeves are embossed and printed by letterpress, resembling art-gallery multiples. “Perhaps a similar aesthetic might be found in the sonic blankets that will emit from these rarefied slabs,” thought I, as I focused my mental telescope. That prediction was only about half-right, since Unframed generally tend towards a more “maximal” approach than the ultra-minimal WMR.

The CD by Richard Garet and Brendan Murray is called Of Distance (UFCD2) and arrives packed in a wallet that unfolds into a long frieze, with strange red markings that might be an approximation of a printout from a spectroscope, the device used by astronomers to analyse the constituent elements of comets and stars. Perhaps the “distance” our intrepid explorers are measuring is inter-galactic in its reach. The noise they make certainly is…a very compelling low-key rumbling, but by no means “silent” assemblage of recorded layers, which may at times included heavily-disguised speaking voices uttering the secrets of the universe. Guaranteed to keep you listening, as you wait with bated breath for a revelatory conclusion. Garet had a solo release on afore-mentioned Winds Measure, an item which provided much subtle stimulation to both ear and brain in its cerebral concept-art way.

Phantom Limb & Earth’s Hypnagogia have recorded In Celebration of Knowing All The Blues of the Evening (UFCD1), a record which will test the endurance of many men as surely as it shreds their nerves like a swordfish. The act turns out to be a duo of American players, Jaime Fennelly and Shawn Hansen, both members of Phantom Limb, and Jaime is also part of Pee-Ess-Eye, whose avant-ish rock-noise exploits have been enjoyed in these quarters courtesy of the Evolving Ear label. Using Farfisa organ and sine-waves, the duo turn in an impressive suite of heavy-duty drones which start out sinister and subtle, gradually reaching a hysterical pitch of whiney intensity and murderous buzz as the album ends. Every creak and flutter of the performance has been captured in sharp detail, and Scott Colburn’s mastering enhances the deathly audio experience of this killer. The white sleeve here has been die-cut to create a grid of small windows, revealing small details of the very minimalist blue-grey cover within. Two postcards (stills from Hansen’s films) are inserted, and the CD is printed with an impenetrable mystical text.

The two seven-inch records I/D/V 01 and I/D/V 02 (could be a case of titles doubling as catalogue numbers) are both highly pleasing artefacts. Each perplexing vinylette features contributions from six accomplished sound artists, each of them allotted three compositions; everything is ultra-short, tiny little fragments of minimalist noise, and some of the cuts turn out to be locked grooves or loops. It’s impossible to know where one thing ends and another begins, and nothing audible provides the least little clue as to what we might be hearing, even. These close-lipped mo-fos are among the most enigmatic, hermetically-sealed records I’ve come across, and in no time at all they have succeeded in planting seeds of ontological doubt in my juddering brain. Equally enigmatic are the abstract cover designs, devised by Gill Arno and executed by Ben Owen; concentric and converging circles, embossed in blind on cream-coloured card. Among those contributing their sound we have Joe Colley (natch!), Lary 7, dieb13, Tommy Birchett, Ian Epps, Annette Krebs, Chris Forsyth, Giuseppe Ielasi and Koen Holtkamp.