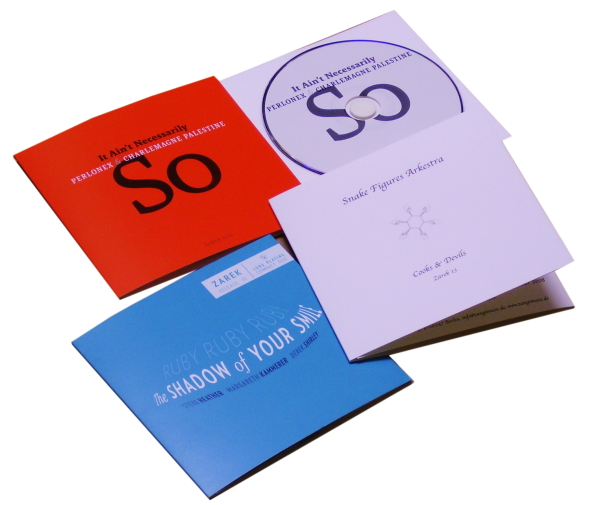 From Berlin, Ignaz Schick puts in a welcome reappearance with three recent releases from his Zarek label. Schick I well recall from years ago as a member of the Perlonex combo and a solo performer in his own right, provider of a most distinctive and abrasive sort of grumbly-rumbly improvised music. Here are said Perlonex, performing a tripartite set with Charlemagne Palestine over a double disk set. It Ain’t Necessarily So (ZAREK 11/12) features Schick beaming out his sine waves, Jorg Maria Zeger strumming airy guitars and Burkhard Beins on transparent percussion, while the larger-than-life American performer contributes his strumming grand piano and vocals. On the first part at least, a very subdued and near-silent performance gathers momentum and strange graceful dynamics are executed in slow motion; by Charlemagne’s standards, I’d venture to call it one of his more restrained outings. The real surprise comes after 30 minutes, when Palestine extemporises vocally on the Gershwin lyric (inspired to do so by the name of the venue they were playing in Vienna, Porgy and Bess), delivering a stilted form of jazz scat-singing in his finest bel canto, veering from angry bellow to nasal whine, all slowed down to match the glacial pace of the proceedings. Highly unusual, even for this maverick…Schick can also be heard alongside Marcel Türkowsky for some 20 minutes on Cooks & Devils (ZAREK 13), which they performed live in Göttingen last June as Snake Figures Arkestra. Using a large number of amplified objects, tapes, turntables (pretty much any solid object that isn’t a conventional music instrument), the pair produce some unearthly and slightly obsessive examples of delirious low-key noise that isn’t a million miles away from James Ferraro and Skaters in the US. There are so many changes across this short disk, you can only wonder out loud what this performance must have looked like to the puzzled audience. Lastly, for listeners who feel unable to digest Charlemagne Palestine’s idiosyncratic take on the golden age of songwriting, there’s Margareth Kammerer performing songs with the help of her own guitar and the rhythm section Ruby Ruby Ruby. The Shadow of Your Smile (ZAREK 10) is her tribute to the songs and voice of Billie Holiday, and includes her update on standards such as ‘God Bless the Child’ and ‘How High the Moon’. I’ve heard Kammerer’s mannered style in the context of some more experimental Berlin group performances, but it seems to make more sense here. The minimal sleeve design has been altered in sympathy, to resemble a generic 10-inch jazz record sleeve from the early 1950s.