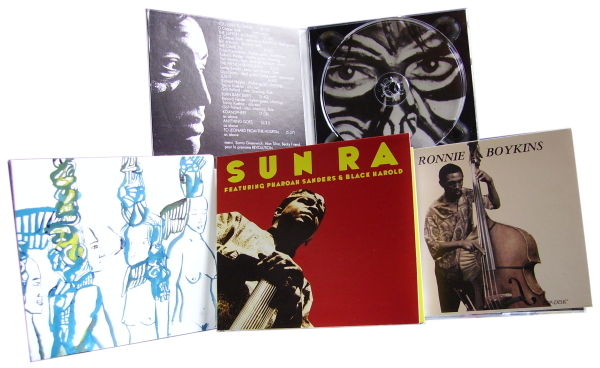 Here be this season’s fresh cargo of booty from ESP-Disk’. For Sun Ra aficionados, this new edition of Sun Ra Featuring Pharoah Sanders and Black Harold (ESP 4054) should be esteemed a total must. It’s a document of the 1964 date at Judson Hall in New York, of which six tracks have been previously outed as EL SATURN 165, but this remastered CD brings us a further five substantial cuts, including 20 ever-lovin’ minutes of ‘The Other World’. The date was part of a four-day festival organised by The Jazz Composers Guild, showcasing the talents of important players such as Cecil Taylor, Bill Dixon, Archie Shepp and Paul Bley; Russ Musto’s sleeve notes give a tantalising glimpse of this fascinating historical piece of the New York free jazz jigsaw. I’ll personally value this record for the cuts which display the eerie, other-worldly side of Ra’s jet-black omniverse (might I add that one of my favourite records in this vein is 1963’s Cosmic Tones for Mental Therapy), whose indefinable genius might be characterised by the presence of melancholy flutes and bowed bass, and a general slow yet assured confidence among the players as they undertake, with ginger steps, their exploration of completely alien musical territory. Bend an ear to ‘The Now Tomorrow’ here as a prime example…aided by superb players such as Alan Silva, Ronnie Boykins and Art Jenkins with his ‘space voice’, Ra’s stark and skeletal piano themes work like the strong medicine of a surgical witch-doctor and you feel he could knit broken bones together with his skills on the ivories. Plenty of free tenor blowing too, such as on the high energy ‘The World Shadow’, one of many places where Pharoah (filling in for an absent John Gilmore) had a chance to make good on his debut with the Arkestra. The story of it is that Sanders, newly-arrived in the Apple, was sleeping on the streets at the time, looking for work; some of that edginess, that amazement and wonder at new surroundings, has found its way into the tone of his instrument.

Above-noted Ronnie Boykins was a regular bass player with the Arkestra. In 1964 he was invited to make a solo record as leader for ESP-Disk’; the project didn’t in fact materialise until 1975, and The Will Come, Is Now (ESP 3026) was the result. Carrying three sax players, a trombonist and two percussionists under his arm, Boykins recruited Marzette Watts to record the session. Not unlike sections of the Ra live album above, this LP has its moments of near-lugubrious wailing on side one, such as the poignant ‘Starlight at the Wonder Inn’, while side two livens the pace with ‘Dawn is Evening, Afternoon’ which reveals a strong Ornette influence in its open-ended construction, while ‘The Third I’ is reminiscent of Don Cherry’s interests in non-Western rhythms and modes. Let’s hope this one hastens the reissue of Marzette’s 1971 date for ESP.

From the non-jazz wing, we’ve got a reissue of the completely bonkers record You Used To Think by Erica Pomerance. The story is that parts of this late-1968 LP were recorded while the players were tripping, but only the penultimate cut ‘Anything Goes’ conveys the paranoid sensations induced by bad acid, with its disconnected voices howling and whispering nonsense phrases out of dark interior shadows. For the rest, we’ve got a fairly decent album of poetry and songs delivered with acoustic guitar, where Erica’s shrill and rather wearying voice is sometimes ambien assisted by tambourines, flutes, and low-key piano work. Her lyrical themes of revolution and destruction aren’t far away from those of her more mainstream counterpart of the time, Grace Slick; Pomerance however clearly has little interest in the disciplines of song form or verse construction, and her words just tumble out in an unwashed heap. Yet this free-form approach can work well on the longer pieces, such as ‘We Came Via’. A very unusual psychedelic underground LP from the NY outsider freak scene.

Gigantomachia (ESP 4053) is by The Naked Future, a showcase for the ungodly talents of Arrington de Dionyso, whose solo CD of mighty drones I See Beyond the Black Sun was an eye-opener from late last year. Performing here on clarinets with a bass-piano-drum trio of sidemen, de Dionyso truly blasts forth with shafts of gold; it would not be incorrect to state that he wails like an incensed demon, wrenching unheard growly and burbling noises from the bells of his woodwinds. Thollem McDonas, Greggo Skloff and John Niekrasz between them manage to reincarnate the spirit of The Cecil Taylor Unit, Skloff whipping his amplified bass to make it grunt like a magic hog in sympathy with Arrington’s animalistic bleats. Each of these five blastermaroos is entitled with a quasi-mystical phrase, suggestive of alchemy, pagan sacrificial rites, and primitive animal-robing cults. Recorded in Oregon last year (something of a first for the NY-centric ESP label), this is a lovely record of masterful, uninhibited free jazz-noise of sympathetic magic.