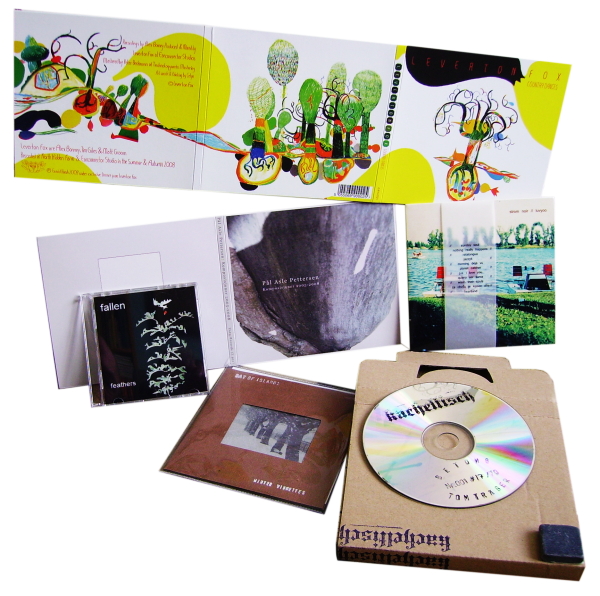 From Frankfurt in Germany we have a curious duo trading under name of Kacheltisch, whose self-titled CDR (on BETONG TONTRÄGER 001) arrives packed in a nondescript corrugated card box stencilled with their name in a grotesque font. Their short experiments, made using controlled feedback via the no-input mixing board, are bizarre and unsettling episodes in abstract near-noise. They have a grey blankness which can be quite disquieting, and there’s a nice uneven rough-hewn quality mingled with dead-on precision, resulting in unusual effects you wouldn’t achieve through more conventional sound-generating methods. “Pushing noise near the boundaries of dance music”, is the claim of Lars Becker and Peter Pawlicki, pointing to their gently-throbbing rhythms with studied poise.

From Stavanger in Norway, here’s your man Pål Asle Pettersen who we’ve been following with interest since issue ten of TSP and his limited-run CDR days. Komposisjoner 2005-2008 (ZANG:RECORDS Z.021) is just as described, a compilation of his electro-acoustic compositions executed within that four year span. Each work is put together from processed field recordings and tapes of his home-made instruments, not that you’d know it when faced with this near-stony, unfathomable and slightly chaotic abstraction. More often than not I feel like a small pebble rolling down the side of a glacier as I listen. Some composers in this area can’t help but look for natural rhythms as they assemble their found materials, exploiting the natural warp and weft of the sounds like rings inside a tree trunk. Not Pettersen, who seems determined to refuse any sort of structural sense in favour of the “random” and the “organic”.

Got a couple of CDRs from Dizzy Records in Eastbourne UK. Bay Of Islands is pretty much one man, Chris Jones with his acoustic and electric guitars to which he adds certain unobtrusive electronic treatments and layers on Winter Vignettes (DIZZY CD016). By no means unlistenable and indeed highly melodic throughout, but this record (not far off from a fourth-division imitation of Ash Ra Tempel) meanders a little too much for me, declining to develop any ideas as it drifts downstream admiring the beautiful landscape. Label boss Andrew records as Fallen, and released the three-inch CDR Feathers (DIZZY CD015) comprised of “flutters, bumps and whispers” according to his description. Five short tracks and a long one, split between ambient music and introspective bedroom songs delivered in a tentative murmur with minimal electronic backdrops; not strikingly original, but the sparing use of slowed-down loops on ‘Iron Bark’ is not ineffective. Contact the label on [email protected]

Strom Noir also produces a species of ambient music, but does it in an ultra-slow way on his new album luvyoo (AMBSINE RECORDS). While his dense layers of treated and processed sounds may not be anything wildly innovative, I find the cumulative effect quite charming – heavy, dreamy, unreal, and suffocating. This Slovakian musician works best, I find, when he disguises everything through overdubbing, re-recording, looping and filtering; when you can occasionally recognise an instrument, such as a languid guitar pluck, it somehow breaks the spell. Note the cover art, where he has cleverly manipulated a landscape so that the trees spell out the title of his album.

Leverton Fox are a trio of improvisers from the UK, Alex Bonney, Tim Giles and Matt Groom, forming their trio in 2007 but with a history of playing in the London improv scene behind them. Their album Country Dances (GRAVID HANDS GRV001) is – to say the least – situated quite some way from “traditional” acoustic free improvisation, as the players work overtime to layer in unusual electronic and noise elements with their trumpet and percussion work. Initial impressions were of a confusing and messy over-egged pudding, but the warpoid sound of this one is slowly winning me round. In the album’s favour, it must be said that each piece remains recognisably “performed” in real time, in a way that much identikit laptop-assembled music does not; the Foxsters have not lost touch with the keystone of live playing and interaction, which underpins all of these oddities with their titles like ‘Spectre & Wagon’ or ‘Basking Sharks’. I usually run a mile from projects which claim to “fuse a multitude of contemporary influences”, but this release may turn out to be an exception. Digipack cover with nice psychedelic tree paintings by Celyn, this is due for release in early May 2009.