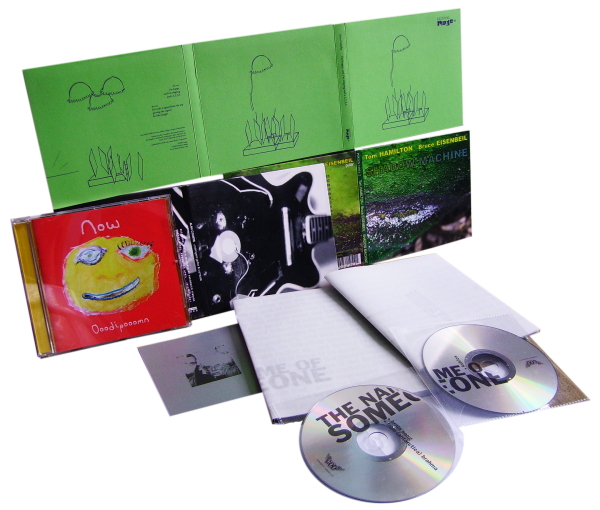 A very presentable and substantial double digipack reissue for Jim O’Rourke‘s famous laptop record I’m Happy and I’m Singing and a 1, 2, 3, 4 (EDITIONS MEGO eMEGO 050 2 x CD). Originally released in 2001, this was one of many Mego releases to have slipped through my oily fingers at the time; it’s since come to acquire a certain status among records produced by digital means, some listeners even calling it a “milestone album”. Hearing it for the first time, I find it has a striking assurance and bravado, melding precision with chaos, melodies with noise, and sharp ideas with free-wheeling “jamming” across its brightly-coloured canvasses. That’s for the first half of the album at least; the second half, a 21-minute composition, proves to be somewhat more contemplative and even quite moving, without ever once falling into any of the numerous clichés we might tend to associate with chillout or ambient music from this period (the music was originally recorded 1997-1999). With new artwork and a bonus disc of contemporaneous material from the O’Rourke archive, this is a most excellent package which I cannot help but recommend.

The Hafler Trio is one of those marginal English avant-garde projects which I have personally found very difficult to approach; their techniques of alienation and distancing may work a little too successfully for this listener. That said, I know they’re widely regarded as important and influential and I’m hoping to fare better as I explore The Name of Someone (KORM PLASTICS PARAGRAPH 0.3 SUBSECTION 111 2 x CD), the final set in a series of reissue packages which have been emerging from Korm Plastics over the last few years. Like previous issues, this one is housed in a tactile wallet with a tracing-paper jacket overprinted with texts and symbols whose meanings are highly obscure. The booklet likewise does not yield its secrets easily, masking all with lines of faintly-printed type which you have to hold up to a very strong light to even discern a trace of anything. This double CD set reissues Brain Song (1986) and Kuklos (1988), originally issued by Touch; and another CD with a lengthy title about attaining immortality which originally came out as part of a book. Presumably these originals are quite rare, making this reissue welcome to many. So far there seems to be plenty of incident, event and substance to stimulate the aural receptors, but the editing and layering strategies make it exceedingly hard work to pull any sense or coherence from the drifting and interlacing paths of sound. “Consume as if it was soup,” is all the press release can tell us.

A spiky and exciting collaboration between the modular synth of Tom Hamilton and the electric guitar of Bruce Eisenbeil can be heard on Shadow Machine (POGUS PRODUCTIONS 21051-2). Eight examples of live recordings made last year in a New York studio, served up raw and without edits; I’m pleased to hear the duo sparking off each other in very disjunctive and angular ways, rather than settling into comfortable droning buy adderall online as some electronic duos find all too easy. But these players mean business; Hamilton is a veteran of late-1960s electronic composition (and is a fixture of the Robert Ashley opera ensemble), and Eisenbeil is coming in from a free jazz background. When their two sound-worlds collide and bounce off each other, these performances really catch fire.

Alan Courtis sends us another missive from Buenos Aires, his album unstringed guitar and cymbals (BLOSSOMING NOISE BN034CD) – a studio project recorded in 2007. With each of these three experiments (apparently named after certain consumables found in any household spice rack), he gradually accumulates very dense clouds of sounds which slowly increase in atomic weight, inviting us to observe the teeming life forms that dwell within these tiny systems. The guitar was an electric one and there has been some processing work, but for the most part this once again demonstrates Courtis’ skill in creating exciting echo and whine effects that could pass for synthesised electronic music, using methods that are fundamentally acoustic and performed in real time by human means.

Entertaining synth-based and percussion art-rock music from Now, a London-based combo; the core trio are supplemented by numerous players on Ooodipoomn (PICKLED EGG RECORDS EGG 74). Their overall instrumental sound is very convincing, and sometimes comes close to delivering some of the frissons promised by the much-vaunted list of claimed influences (lo-fi, synth pop, and Krautrock and all the usual post-Stereolab suspects), but I find my attention wandering when they open their mouths to sing. I can’t find enough engaging content in the lyrics, which often simply repeat their titles over and over like nursery rhymes, and the thin, breathy voices of the singers are very fey and English to my ears. However, they have forged collaborative links with Damo Suzuki, Charles Hayward and Mike Watts, so I would imagine their live performances must generate a deal more excitement.