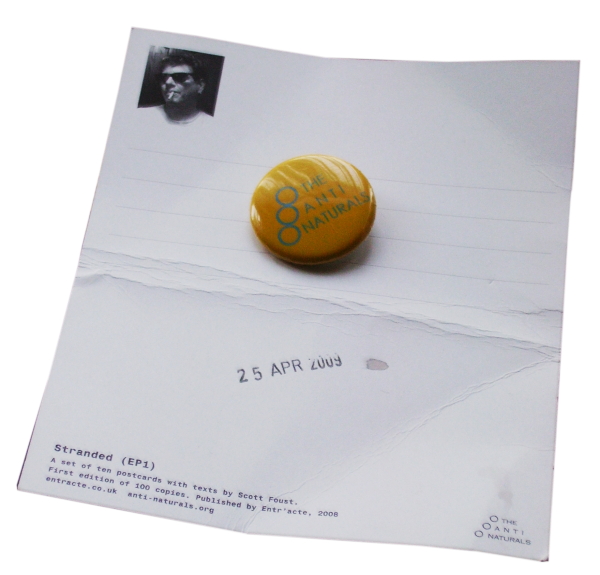 Saturday 25th April 2009: made my way to the DIVUS Gallery in Shoreditch to see a performance by my good friend Scott Foust, appearing with Frans de Waard as The Tobacconists. The duo take their name from their shared enthusiasm for nicotine consumption, and in the spirit of the event I myself was pleased to accept a thin Brazilian cigar from de Waard, whose personal preference is for pipe tobacco. As we puffed on the Divus Gallery balcony in the brisk April air, he told me that Holland is not immune from the smoking ban epidemic which appears to be determined (as I would see it) to make the entire world abide by the same rules of political correctness. In Holland, it seems you’re not allowed to smoke in your own home if visited by a non-smoking plumber, for example. The duo are just at the end of their European tour, where they’ve been playing venues in Germany and Belgium, apparently to general audience indifference and lack of money. Their six-tune set went down very well with the small but appreciative London audience however, and the duo have clearly had plenty of time to hone these instrumentals to perfection. Live performances using laptop, keyboard and mixing desk are underpinned by Foust’s backing tapes, and the pieces – some with very vivid titles, which Foust is careful to announce in each case – are exciting combinations of electro-acoustic music, with sound effects, samples, and even drumbox beats for ‘Smoke Gets in Your Eyes’, and all is packed with drama and dynamics. The two performers couldn’t be more different in their approach; Dutch genius de Waard sits impassive, simultaneously manipulating a Powerbook and a small contact mic with studied concentration, while Foust – dressed in his characteristic bright yellow costume – busies himself with prepared cassette tapes, bobs up and down (even when there’s no rhythm involved), leans on keys, sups beer, lights a Dunhill, mutters a quip about Cecil Taylor, and warmly acknowledges audience response with an enthused raised hand and a smile. This was Foust’s first visit (from Amherst, MA) to the UK, and many old friends turned up to see him; in the audience were Darren Harris and Tim Goss from The Shadow Ring, Stefan Jaworzyn of Ascension, and Pete Johnstone from Second Layer Records. A tip of the hat to Allon Kaye of entr’acte for organising this event, although (as he disclosed to me) he rarely makes any money and the audiences are small, even when exhibiting a great show by Lionel Marchetti. See here for Allon’s photos of the two days (day two was a film show and performance art by Foust).