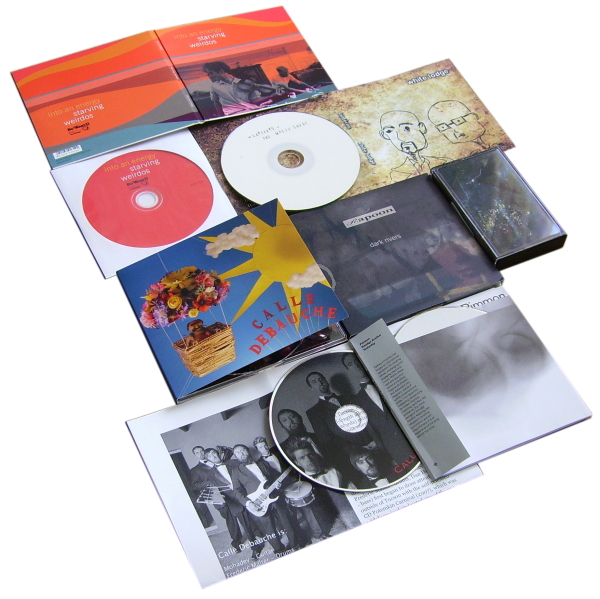 Rapoon is Robin Storey. At one time we used to enjoy a cornucopia of his releases through Staalplaat in The Netherlands, all of them dense, mystical, ethnic-inspired ambient fog-ups, replete with interesting samples and heavily-buried voices murmuring within colourful shrouds of slow music. For Dark Rivers (LENS RECORDS LENS0102), none of the above skills have deserted this gifted ex-Zoviet France creator, and what’s more we find the interesting addition of warped trip-hop beats to some cuts adds a new dimension, plus there’s the overall feeling of menace running through many tracks. Perhaps it’s the snarling American voice at the very start of the disc which sets this tone. With track titles that refer to weather, geography, and lost religions, plus stand-out weirdies like ‘The Messiah of Science’, this is a great release which promises plenty of oomph for yer Euro.

Pimmon is Paul Gough from Sydney, an electronic maestro for whom I have a lot of time – very coincidentally, I was wondering why I hadn’t heard a new release from him lately. And now here be Smudge Another Yesterday (PRESERVATION MUSIC PRE021), a new solo record with eight very varied musical statements which I look forward to exploring in more depth. Early spins suggest his stylistic method has become slightly more “slick” than the earlier work (Secret Sleeping Birds is an all-time favourite), but still laced with the underlying near-obsessive manner with which he deploys his endless ever-changing loop structures. Each piece here is different to the last, veering from high-pitched squealing episodes to uncertain, abstracted ambient scaping. Mark Gowing did the elaborate foldout package, reassuring us that it is printed on 100% recycled paper.

From Leeds, we’ve got White Lodge (NO NUMBER CDR), the latest self-released item by the groovy underground noise-droners Lanterns. This one showcases lots of superb near-psychedelic guitar work, performed by their guitar player with great assurance, a man who fears neither high volume nor mesmeric use of echo, phasing and fuzz pedals. The mid-point highlight must be ‘They’ve Got Our DNA’, a 15-minute monster of lysergic excess replete with badly-recorded drumkit and mucho atmospheric grunge. Truly fine energy music there, but the CDR has its melodic and quieter moments too. Totally recommended; you may be able to get a copy from Boa Melody Bar. Luke Volla also sent me a cassette collaboration made with “Oxford minimal scrapers” Divine Coils, not yet heard at time of writing.

From Arizona, a five-piece who call themselves Calle Debauche have made their debut album after playing together for some three years. Calle Debauche (EGG HELMET RECORDS NO NUMBER) contains 13 instrumental tracks where they demonstrate their tremendous prowess with guitars, marimba, and brass instruments, and their considerable range of stylistic influences. In their own words, they want to take on everything including “Frank Zappa, Eastern European folk music, math metal and ska”. Quite an ambitious shopping list, that! Well, there’s no denying their technical skills – you’ve never heard such flawlessly clean playing outside of the Zappa 1988 touring band; and the stylistic mixes listed above in fact don’t result in the sort of indigestible hodge-podge I might have expected. It’s just that I find it all a little bit too clever for its own good – and track titles such as ‘Lemming Ambition’, ‘Defenestrator’ and ‘Son of a Cultural Gladness’ do nothing to dispel that impression. But it’s an upbeat, entertaining, and jolly listen, and the band dress smartly in tuxedo and black tie, as if all prepared to play at a wedding in a Guy Maddin movie.

Starving Weirdos are a four-piece who recorded Into An Energy (BO’WEAVIL RECORDINGS WEAVIL38CD) at their home in California last year. All of them play a vast range of acoustic and percussive instruments, and use electronic music and field recordings in generous gobbets through these eight exciting tracks. We haven’t heard such thick layers of strange, colliding sounds since the glory days of Biota / Mnemonists, and Starving Weirdos – displaying great studio craft – seem disposed towards the same penchant for mixing prepared tapes with live performance as were This Heat. While the bulk of the album may tend towards the drifty and droney, it also has its fair share of pagan drum-fueled excitement and episodes of neurotic paranoia, particularly on the edgy opening track ‘Seeing is Believing (You Decide)’.