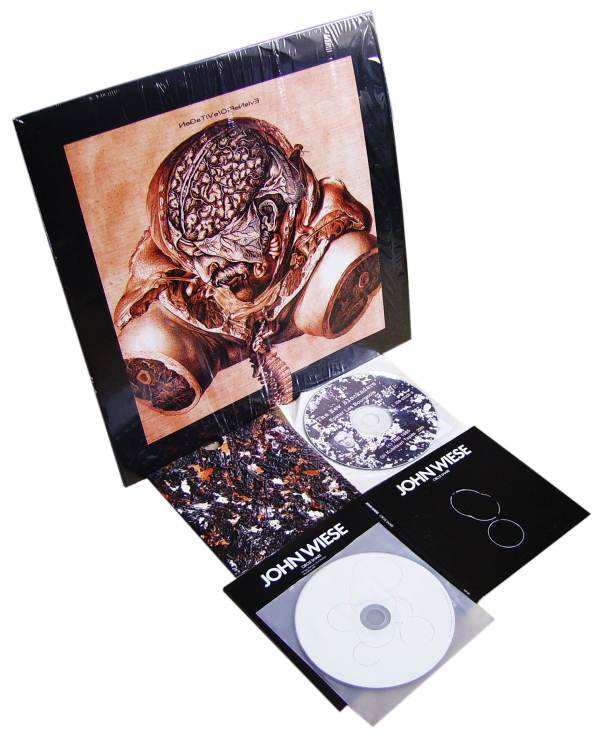 Herewith some recent releases by past masters of noise which may help to lighten your mood at this most oppressive of times. John Wiese recorded Circle Snare (NO FUN PRODUCTIONS NFP-49) during a recent European tour and now shares with us the compressed and/or edited results as a half-hour powerpack of slicery and fragmentation. We seem to be hearing snippets from his equipment set-up – microphone tests, amplifiers being switched on, shortwave radio tuning, feedback bursts, that sort of thing. All these things are ripped out of context, then slammed together in a chaotic heap of inchoate garbage until, under duress, they start to make some sort of sense. Apparently Wiese “found himself tangled deep in dialogue with his instruments and ideas”, and there seems to be an underpinning desperation as the creator frantically tries to escape from a self-made cage of noise. Throughout, you can hear this straining attempt to communicate using nothing but shapeless electronic noise forms, and the struggle is a brave one. Unlike some power-noise heroes we could think of, Wiese seems to concern himself with continually asking questions about the mode in which he works.

The New Blockaders are here with a very tangible reissue of their 1985 release, Epater Les Bourgeois (KUBITSURI TAPES S;E; X59-032CD-R). This is one record that is notable by its absence from the retrospective 4-CD set which came out some years ago. In fact this notorious record is completely “silent” from start to finish, and offers two cuts – both precisely 22 minutes and 31 seconds in length, presumably sides one and two of the original cassette release (on the UK Frux label). Well it’s not completely silent of course. Programming silence into a CD would have been an easy enough task, but what we hear is a near-inaudible yet quite distinctive gentle rumbling tone, which suggests that the Japanese label who reissued this actually went to the trouble of sourcing the original cassette, and remastering the results for CD. One might then be tempted to associate this with the minimalist gallery-art offerings of, say, the Winds Measure Recordings label, but I suspect that is very wide of the mark. Even in this silent mode, you can still taste the seething anger of Richard Rupenus and his cohorts, and it’s every bit as aggressive as the more familiar all-out noise assaults of The New Blockaders. I tend to hear it as a long, slow-burning sulk, every minute of murderous silence dripping with contempt for our shared middle-class values. Naturally, the sleeve (hand-made by Rupenus himself) has a lot to do with this; heavily-textured acrylic paint has been flung and smeared over a plain white master bag in anti-gestural ways (almost a cruel parody of drip-painting and abstract art), the shapes and colours deliberately intended to resemble shit. Limited edition of 200 copies (mine is number 24).

The vinyl item is a tribute to The New Blockaders, realised by MSBR and Richard Ramirez, and it’s called Negative / Offensive (ECSTATIC PEACE! E#85e). 400 copies exist. Subtitled “A Celebration of the Influential Anti Artists Richard and P.D. Rupenus”, I thought it might be another project remixing TNB records, but in fact it’s a mail collaboration between Koji Tano and Houston’s finest brutalist, Ramirez, each artiste continually upping the ante in their ferocious destruction of each other’s tapes. Playing the grooves, you can hear a lot going on all right, but it’s no less nihilistic in its attack than the all-silent record above. Indeed, the interminable rumbling leaves you not an inch of space to breath, and to listen is like being buried alive. The sounds themselves, shorn of anything remotely musical or pleasurable, have a deeply inturned and introverted quality, like neutron bombs planted in the listener’s colon. Yuk. These anatomical disasters are no doubt suggested by the memorable sleeve collage, executed in lurid brown and reds by Stan Reed, owner of PsychoChrist Productions and the man behind various extreme and nasty noise projects in Washington state. To ensure total alienation, all the texts on the front and back of the LP are printed backwards (not mirror-writing; the letters are in the correct order, but every single character is reversed), thus making decipherment that much more difficult. Koji Tano died quite young, in 2005, and was a well-respected and influential figure in the international noise scene; those curious can download a 10-CD tribute to the man.