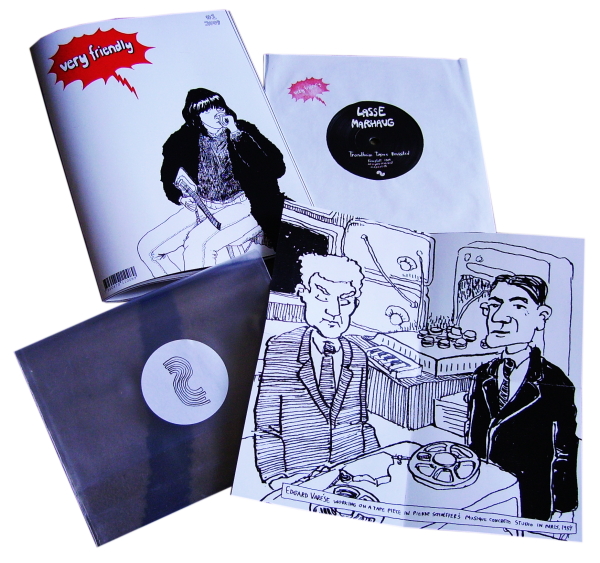 Very Friendly #1 is a comic book and record package from Komplott, written and drawn by Ronnie Sundin. Regular readers will know we have a lot of time for this self-effacing Swedish composer, having interviewed him in a previous issue and noting his oneiric, dreamlike (and sometimes very quiet) records with great interest. I keep forgetting he’s a fellow cartoonist. This comic book of his is so irresistible I feel like ordering a copy of the previous issue (#0) just to pick up the thread of his chain of thought. There are three stories here, each demonstrating a different aspect of Sundin’s writing skills. “Just another scandal in Paris” may have the most immediate appeal to our readers, as a fairly straight depiction of the notorious Deserts concert by Edgard Varèse, with its dead-on portraits of the composer (and of Pierre Henry and Xenakis also). That’s a documentary strip of sorts, well-researched and accurate too. We’ve also got “A Fetish for Trondheim”, a slice-of-life autobiographical strip, and the utterly charming story of Ronnie’s visit to Norway and his first meeting with Lasse Marhaug. The trip was packed with mildly perplexing events, all of which are greeted by Sundin’s bemusement or surprise (resulting in some priceless drawings of facial expressions). A trip to the recording studio is limned with the most brilliant and innovative depiction of noise-making I’ve ever seen in comics – wild sound effects and all! Which brings us to the last piece, “Throbbing Gristle At the Cryptic One Club 1978”. It’s an imaginary depiction of this Throbbing Gristle performance, one at which Genesis P. Orridge apparently became somewhat unhinged live on stage due to personal reasons, resulting in a mad performance from him and bewilderment for the rest of the band. The drawings of the band members are uncanny – maybe not strictly in terms of photographic likeness, but in body language and demeanour; and the depictions of live music playing are packed with accurate detail, and highly inventive in approach. What’s impressive is how Sundin appears buy ativan online to have reconstructed the event from close listening to a bootleg LP of the concert, some careful research, and hefty doses of his own imagination. Due to its honesty and truth to the spirit of the music, it’s without doubt the best example I’ve seen of this sort of thing, worth a million of the dreadful sort of unimaginative fanzines that slavishly copy photographs of Elvis or The Clash in their misguided attempts at “accuracy”. Wonderful, a great read which I recommend! Oh, there’s also a seven-inch record inside which is great too. Trondheim Tapes Revisited is by Lasse Marhaug, and in remaking the tapes of noise that date from the same time as depicted in the comic, he’s tried to imitate the comic book panel format and structure his cut-ups in sequenced blocks. Listen to the record as we read the comic, is Lasse’s advice; “they’re meant to work together”.