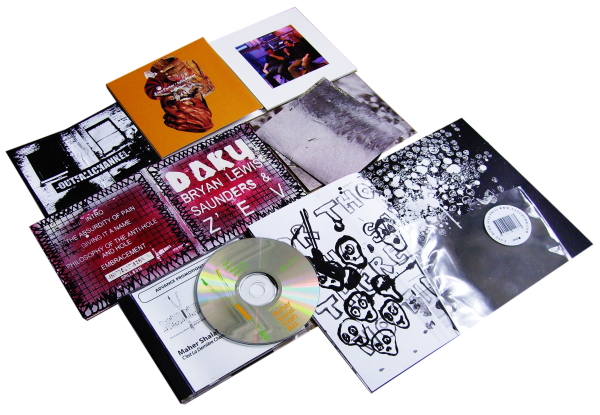 Second Layer Records of North London, already one of the smartest record shops on the planet, has launched a new record label, first release being a collaboration between Evan Parker and John Wiese. C-Section (SLR001) dishes up four live improvisations recorded in the studio by Anna Tjan, packed in a handsome digipack and wrapped in a collage sleeve by Cody Brant. The sonic contrasts between Evan’s manic tootling and waves of triple-tongued parps and the sandpapery, chaotic blasts of electronic mischief from Wiese certainly produce the requisite effect. Parker has achieved many highly successful collabs with electronicists throughout his career – Paul Lytton, Lawrence Casserley, Disinformation, and now Wiese. In fine, here’s two of the strongest and most distinctive talents working today in improv and noise; label boss Pete Johnstone (who has staged not a few memorable gigs clashing jazz, noise and improv in London) has exhibited his usual assured boldness in co-ordinating and releasing such an exciting work.

Tenor sax with electronics in quite a different vein on Lausanne (FOR4EARS CD 2072), with these 2006 live recordings made in Switzerland by Urs Leimgruber and veteran analogue synth genius Thomas Lehn. While the CD begins in fairly tranquil mode, full of discreet hums and gentle lulling sax blurts, the duo grow gradually more agitated over time; the third track is nothing short of science-fiction plumbing, Leimgruber drastically mutating his own tubes in real time without any sort of electronic processing.

Freakish item of the week might be this new double-CD from Maher Shalal Hash Baz, the Japanese combo of high oddity. C’est La Dernière Chanson (K KLP210) resulted from a recording session in France put together by band leader Tori Kudo, where the band (aided by French local players) recorded over 200 new tunes in six days. 177 of them are now released for your delectation; there’s 99 of them on the first CD alone, and needless to say they are notable for their extreme brevity. They mostly seem to state a melody – or just a fragment of a melody – then stop dead, using brass instruments, guitars, percussion and bass, all rendered in a highly skeletal fashion, and played quite slowly with an endearing clunkiness. At times you may think you’re hearing your local school band rehearsing for a Burt Bacharach concert. Maher Shalal Hash Baz have, I think, tended to divide listeners with their previous pharmacy-no-rx.net releases, and I admit to having no firm grasp on their back catalogue; with this puzzling item, it’s clear that Kudo is keen to resist being pigeonholed, which is a good thing.

DAKU (OUTFALL CHANNEL SPILL #016) arrived from Dayton Ohio. It’s a collection of very extreme vocal recits from Bryan Lewis Saunders, with sonic accompaniment by Z’EV. Saunders recounts nightmarish tales of mental anguish and medical disasters, with titles like ‘The Absurdity of Pain’, some of them involving anal penetration and much personal bodily agony. Saunders’ work has been described as “visceral” and “confrontational”, and his very urgent near-hysterical voice on these pieces (he literally sounds like he is possessed by demons) will probably alarm most listeners, if not repel them entirely, while Z’EV’s eerie distorted electronic sounds also tend to induce paranoia, claustrophobia, and a general sense of unease. This document of extreme performance art comes packaged in a handsome silk-screened wallet.

Swedish creator Ronnie Sundin (see earlier post) is back with another music-and-book package. Seven Year Silence (FANG BOMB FB011) is a full-length CD of his own music, packed in a slim booklet of monochrome drawings printed in dazzling, sharp blacks. All the sonic material was assembled over a seven-year period and subsequently compressed into two aural wodges of hissing, slithering and clattering noise in Ronnie’s Malmö studio. These are two of the densest, most dynamic and near-impenetrable blasters I’ve yet heard to be issued in the name of electro-acoustic noise; they are packed with content and import, even if the meaning is hard to decipher; and an overall sense of doom, defeat and futility (which fits this label’s identity) is never very far away. Meanwhile the booklet is filled with fragmented images of skulls, pyramids and disjointed lettering rendered in Indian ink, sometimes obscured with heavy ink blots and grey ink-wash clouds. Great! A gorgeous release fit to accompany anxieties and emotions of the jet-black variety.