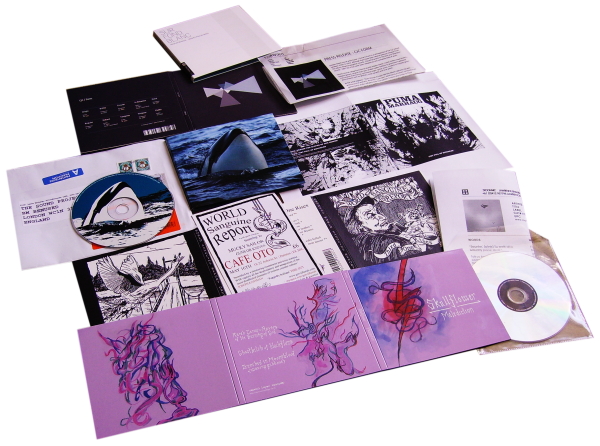 Skullflower‘s main man Matthew Bower teams up with Lee Stokoe, Samantha Davies and Stuart Dennison, to produce the amazing Malediction (SECOND LAYER RECORDS SLR002) record, a blistering studio bash recorded last November. Guitars and percussion (plus some cello and violin) have rarely sounded so utterly cataclysmic, except in the hands of this reliable veteran player of underground English noise and evil droning. Thundering feedback effects, overloaded amplifiers, and ultra-intense neck-wringing are the order of the day on this massive record; Bower is emerging as the UK’s answer to Keiji Haino. Triple gatefold digipack with full-colour renderings of Bower’s artworks, and the enterprise is overlaid with title-elements which bring forth supernatural curses, warlock’s spells, and sinister esoterica of all stripe. Lovers of no-nonsense ferocious guitar noise should check in here immediately.

World Sanguine Report have made an original and innovative record with Third One Rises (GRAVID HANDS GRVH002). Here be eleven quirky songs, not unlike sea-shanties with surreal imagistic lyrics – a sort of mash-up between the whaling songs of A.L. Lloyd and the poetry of Guillaume Apollinaire. Andrew Plummer (singer, electric guitar) is the composer of these eleven Captain Ahab-styled diversions, pitching his earthy tenor voice into the songs with gusto and coming across as a more approachable variant of Nick Cave (the song ‘Jazz Hell Murder Ballad’ is, in title at least, something Cave would surely relish). Plummer’s ably supported by a crack team of acoustic players who turn in very clear, distinctive performances on these odd arrangements, leaving no space unfilled with many a creak and lopsided rhythm. The abiding impression is of a peg-legged mariner accosting the hapless listener much like the narrator in ‘Orange Claw Hammer’, and the strange woodcut-styled cover artworks of Chris Odgers fit right in to this schema. Very good.

Norwegian power trio Puma and noise genius Lasse Marhaug joined forces in 2007 for a live tour, and have since decided to carry on working as a monstrous entity of ungodly noise, unleashing roars of toxic waste to the nation wherever possible. The recent LP Fist Full of Knuckles (KNUCKLEMAN RECORDS KNK001), featuring live recordings plucked from that 2007 tour, is an absolutely murderous beast – a snarled-up noise rock trio clashing heavily with the added lethal doses of Marhaug turntable and electronic noise. Two long and heavy pieces lumber along in neutral – it’s Godzilla crossed with King Kong in a titanic battle (and they’re both wearing blindfolds at the time). It’s all great constipated blackness of the first water, but in particular you should listen to what guitarist Stian Westerhus is doing with his detuned strings (they sound like bass guitar strings) – both menacing and hilarious in the same moment. I must get a vinyl copy of this, and so should you; try the Norwegian distributors Looop.

Sur Fond Blanc (EKUMEN EK009) is the effort of two electro-acoustic composers Nicolas Bernier and Jacques Poulin-Denis. A lot of their brittle sounds are a shade too tasteful for my ears, but they do occasionally harness some decent processed noises in service of dramatic, narrative effects. Actors and actresses use their speaking apparatus to contribute fragments of prose and poetry into the mix, as do certain dancers whose footsteps form part of the compositions (the record has its origins as a commission for a dance work). These Canadian musicians are, they say, attempting to convey something about “interior space, emptiness and absence.”

Chihei Hatakeyama‘s Saunter (ROOM40 RM432 CD) is a very pleasant record of Japanese Ambient electronic music. The composer combines field recordings with electric pianos and electronic drones, and avoids abrasive noises for the most part; with his love of contemplating nature, perhaps he’s not unlike a more melodic version of Koji Asano. The press releases invites us to find parallels with Sansui-Ga, a specific form of Chinese painting which deals with landscape and the changing seasons.

I was intrigued enough to bend an ear to Form (FORWIND FWD00) by CjC, since its composer Conor J Curran served in Dublin under the tutelage of fellow Irishman Roger Doyle, a visionary composer whose work I always enjoy (he recorded as Operating Theatre for the United Dairies label and earned himself a place in the quasi-surrealist parade of Nurse With Wound’s universe). Curran’s work is not unlistenable, and has a very professional polish, but sadly I find it unadventurous and a shade overworked. His combinations of found sounds with born-digital sounds are not especially innovative in a world that’s familiar with Hecker and Peter Rehberg, and his attempts at deploying the “glitch” – a highly specific invented term to describe certain desirable mistakes which arise in the course of processing digital materials – come across as slightly inept, like a traditional landscape painter who has only just discovered Jackson Pollock. His compositional titles, including ‘Circular’, ‘Tangents’, ‘In Between’ ‘Angular’, and ‘Point’ might have been taken from a book on geometric patterns or architectural design, suggesting there is a deal of precision in what he terms his “over-arching sound aesthetic”.

Ocean Sounds is Heike Vester, whose Marine Mammals and Fish of Lofoten and Vesterålen (GRUENREKORDER GRUEN 066) is a beautiful collection of recent field recordings of whales, dolphins, sharks and seals in their marine habitat. Vester is a marine biologist and she’s also committed to preserving life on this planet “by trying to minimize human destruction”. The CD, partly supported with money from the World Wildlife Fund, comes with a full-colour booklet packed with photos and contextual information about the mammals and their behaviour. An extremely moving and wonderful record which is great to listen to. One thing that’s interesting is that unlike Chris Watson, another noted genius in this field, Vester is not especially interested in showing us the drama and danger of nature, and instead what comes across is a deep serenity and peace that we human beings could do well to emulate.