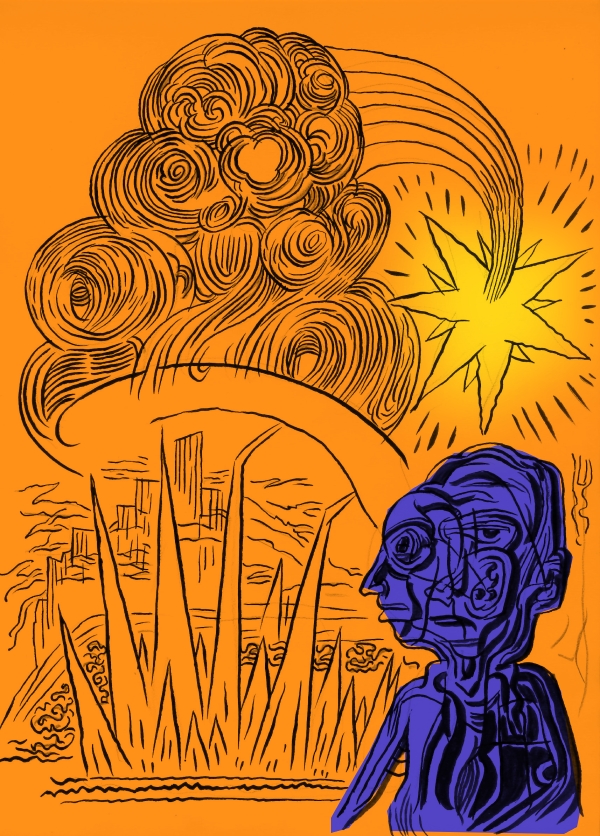 We very much enjoyed an uncanny night of music at Café Oto last night. (See here for a great poster). This was the first venture of The Sound Projector to this London venue with which all of the capital’s underground cognoscenti are abuzz, and quite rightly. We were there to see a performance by mudboy, who unbelievably was supporting a rare appearance by The A Band, who (rather than simply reforming) simply seem never to have gone away. Slow Listener came up from Brighton and surprised me with his table-top setup which looked like an arsenal fit to deliver an onslaught of harsh table noise. Instead, a concise set of beautiful processed drones issued from these pedals and mixing desk, guided by his steely white talons. Upon completion his equipment fitted neatly into a compact blue backpack and he was ready for the train ride home.

The A Band have long existed as a rumour for this listener, despite ownership of a Qbico LP by this UK freakoid collective which I haven’t yet dared to spin. Neil Campbell (one prime mover of The A Band) said this to me in 2005:

NC I played in the A Band at the end of the eighties, early nineties.

EP I’ve heard of that. Tell me more about that.

NC It was just like really where we started playing big-band improvised things, and we’d have children playing, and people who didn’t know how to play. There’d be a core of us who were into, I guess, left-of-centre music and would just rope everyone in.

EP Who else was in it, besides yourself?

NC That you would know? Richard Youngs, Stewart Walden, Jim Plaistow, Stream Angel, there was loads of people. It had a much more, I don’t know, for want of a better description, performance-art Dada edge to it than Vibracathedral. We’d be playing this droney music and we’d have someone doing a live action painting, naked, eating fire. So it was kind of daft. But we had this core of rocking sort of thing. We made a few records, by default, I think! It was much more, anyone can join in and that. I think that some people perceive what Vibracathedral do as being that as well. Every now and again, particularly when we were first playing out, we might get a hippy come up to the front trying to bang a drum with us. We’d have to put him off, whereas in the A Band, we’d have given him a guitar. In the A Band, we’d have left the stage and got him to play instead.

None of this prepared me for what I beheld at Café Oto, where I counted about eight beautiful people on stage who proceeded to run riot and perform some of the most anarchistic and humanistic free music I’ve seen and heard for a long time. Players run on and off stage, swap instruments, drop out and drop in, engage audience participation, and are clearly having a great deal of FUN (a phenomenon I rarely witnessed in years of attending Company Week, I’m here to say). A guitar player and a tall white-garbed fellow who played a saucepan (both with shoulder-length hair and beards) acted like the sort of mischievous pixies I’d always hoped Gong would be like on stage, while a stunning young lady with red hair dressed like Wilma Flintstone played the Theremin with studied lunacy. Plus live electronics, toy trumpets, toy accordions, upright bass, drums, coconuts unexpectedly clopped in your face…most telling of all perhaps is to hear their onstage dialogue before and after the music (in that most intimate of settings, you have no choice); they clearly speak a shared private language, which all but excludes us outsiders. The music (although mixed with too much top end; I wasn’t the only audience member with fingers jammed in ears on occasion) was totally glorious, streaming free-form genius and also (thanks to the instrument-swapping tactic) packed with dynamics, ideas and tons of sheer FUN. Far more exciting than some more solemn large-scale collectives who purport to offer us similar doses of freedom. “This is the real thing!” bellowed mudboy in my ear, between mouthfuls of Doritos, and he was totally right. Sheesh, can you imagine spending a weekend with these guys? Exhausting!

mudboy‘s stage act (first time I have witnessed it) entails, much as I suspected it would, a great deal of psychological and physical preparation on his part. It’s a ceremony. When he got started he ensured that all house lights should be dimmed, then lit bundles of incense, placed small blue lights in impossible parts of the ceiling and tables, rang bells, donned his ceremonial jacket with his adopted name sewn on back, and emitted backing tapes of eerie drones and nature recordings. Then climbed up on tables (chairs thoughtfully deployed to enable this, minutes before) to declaim Walt Whitman styled poetry through a radio mic. Smells and bells and a sermon – isn’t this a ceremony from the Catholic church? At length his portable organ sonorously groans forth, producing loud marching music and beautiful swirling drones which somehow inhabit the same sound-world and dimension. Within a matter of 25 minutes, mudboy had totally transformed our surroundings – visually, aurally, nasally (!), but also in some deeper psycho-pagan-ceremonial way which I still cannot understand. I soon had to flee in terror to ride the bus home. Further terrors of the London night awaited me outside, but none so strange as what had taken place in that secret darkened room!