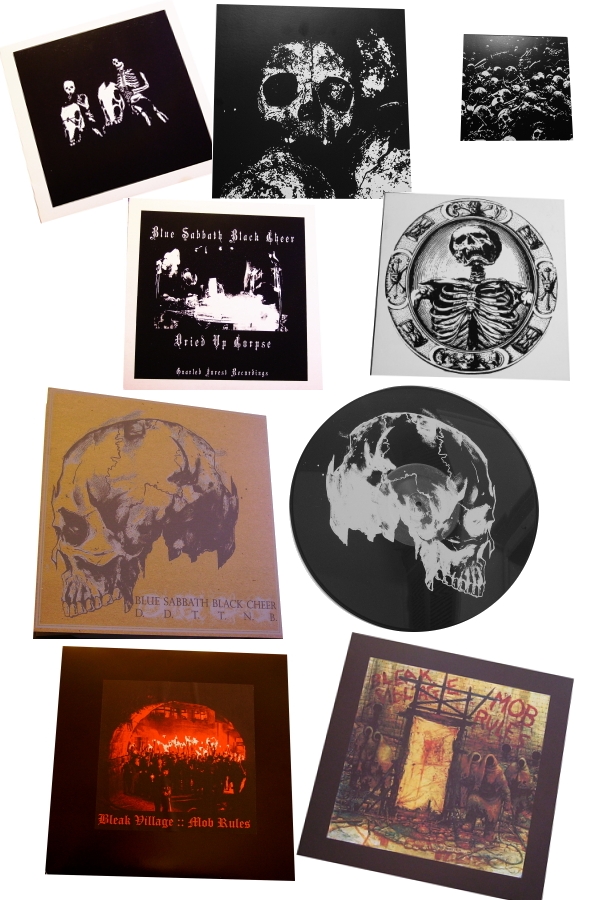 Here be three Vinyl Voots of fairly monstrous noise, quite a lot of it enriched with printed imagery of bones, deaths-heads, and skeletons. Stan Reed of Washington State was the concepto-genius behind cut-up noise prankster project The Broken Penis Orchestra, but of late he has turned his noise-dealing mitts to Blue Sabbath Black Cheer, a live electronics band project with Wm. Rage; besides wallowing in death images, they also flirt with Black Metal titles, fonts and imagery, and create a strain of virulent performed noise that’s incredibly harsh, but excitingly dynamic too. I’ve heard a record of live blasts from this duo which you could use to boil a bucket of soup!

If you’re up to it, BSBC feature on all three of these limited-pressing splits; on Bleak Village…Mob Rules (DRUG-FRONT PRODUCTIONS NO NUMBER), we hear a growly and sullen mope from Reed and Rage, filled (like everything you see in this picture) with large amounts of implied menace. Slow, dark and nasty, their two tracks ‘Paranoid’ and ‘Elektrisches Begräbnis’ unspool with the calm but fierce deliberation which John Wiese can also do so convincingly. On the flip, Penetration Camp (a repellent name, that; somehow conflating concentration camps with rape) perform ‘Mob Rules’ at 45rpm, a piece which starts off with a few bleak, desolate clangs as of some lone soldier’s canteen dangling hopelessly from barbed wire. This is just a taster for the insufferable sounds of torture which ensue, comprising screaming, yelling and the sound of remorseless hammers smashing limbs. A painful nightmare reinforced by a grisly colour painting insert. Gerald Hansen recorded this duo who trade as M and ~dyna*girl.

For D.D.T.T.N.B (ANARCHYMOON RECORDINGS ANOK 27), the duo of BSBC have collaborated with veteran English noise-blasters The New Blockaders; both Richard and Philip Rupenus have brought “additional sound sources” to this party, and a one-sided LP picture disc resulted. It’s an unvarying stream of mashed data, a monotonous and sluggish death-ride. The intense, over-crowded racket is laced with many elements I’ve come to associate with the anti-pleasure principles of Mr Rupenus, and we seem to hear the very fabric of music itself being smashed, pounded and crushed in a violent and ugly car-crash, from which few survive unscathed. The gigantic skull image (by Demian Johnston) is repeated on the picture disc, and the beautifully-made cover has a sturdy card flap, making it like an updated cover for a folio of Goya lithographs. 200 copies only; looks like this one’s already sold out at source.

The 10-inch item features two untitled pieces and is released on Reed’s own label Gnarled Forest Recordings (GF25). The BSBC side is, once again, slow, dark, evil and seeping despair from every one of its ill-lit corners. Much “simpler” than either of the above pieces, this achieves its effects through fewer combined sounds and a little more chilly air circulating in its overall audio space. Like taking a midnight bathe in freezing sewage. Dried Up Corpse win the prize for the most memorable name of grisliness on this page, and offer a very dessicated sound, like a thousand sheets of sandpaper flying through a howling wind. Uncomfortable rather than painful, they still remain extremely abrasive. The screenprinted cover is a belter; sharp screenprinting in ultra-solid jet-black blacks. I think this front cover image, of two skeleton riders on skeleton horses, may also have been used by Davenport for an LP on Not Not Fun Records, although they printed it in red. Many thanks to Stan Reed for sending these bitter growlers (what are you trying to do, ruin my day?!)