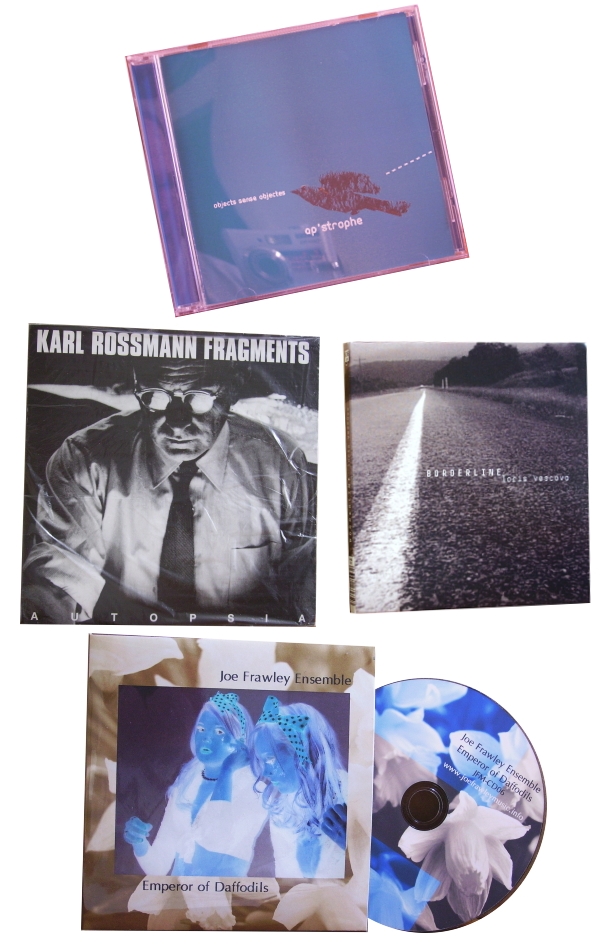 Ferran Fages and Dimitra Lazaridou Chatzigoga have teamed up, perhaps on a temporary basis, to form ap’strophe; Ferran plays the acoustic guitar, while his sparring partner handles zither duties. On objects sense objectes (ETUDE RECORDS 019), the listener should be prepared for lengthy stretches of exploratory noise-making, as both players seem determined to extract anything but “normal” acoustic sounds from their chosen instruments, and tentatively approach these wooden stringed monsters as if they were tentacled aliens from Venus, or caged tigers that might bite. (One press photograph shows Fages holding his instrument with its head brushing the floor, a most unconventional posture). The winged bird on the turquoise cover promises something of the romance of freedom, but this CD spends more time on the runway and less time in the air than we might have expected. Writer Michalis Kyratsous devised the title for this CD; in explanatory notes, he speaks of “the suture of various schemas”, “ontogenesis” and “psycho-physico-acoustic stimulation”, in his attempts to “throw some light on the paradoxes of the function of objects”.

The CD Borderline (NOTA MUSIC CD 632) is also largely acoustic, but it’s all tunes and songs. Songwriter Loris Vescovo sings in Friulian, a language spoken in a part of north-eastern Italy, and he also accompanies himself on the acoustic guitar, backed by musicians on cello, double bass and other instruments. Some of the songs deal with political subjects, quite topical and even controversial (‘Ellis Island’ is about migration), but one would be mistaken, I think, to characterise this warm, melodic and friendly album as a protest record.

From Illuminating Technologies in Prague, a new release from Autopsia. On Karl Rossmann Fragments (IT0011), Autopsia purports to perform certain snatches of works by an obscure 20th-century Czech composer of this name. Is that him on the cover? Doubtful; one suspects that Rossmann (of whom I can find no reliable records or biographical details) is simply a fantasy, but the music here is compellingly difficult to listen to; all-electronic, denatured, inhuman, discordant and filled with atonal explosions and hard-to-follow twists. None of it feels remotely “composed” in the conventional sense and indeed this slithery, semi-mechanical record almost seems to be the product of wayward machines, not all of them necessarily computers. This is almost how a mischievous player from the Mego label might proceed if they were fabricating a lost composer of electronic music, something they were (incorrectly) accused of doing with Max Brand (see the double CD on the Rhiz label). For other possible playful hoaxes in this area, seek out the work of Frank Rothkamm, who openly pastiches music of the Cologne school. The CD arrives in a card wallet slightly smaller than the sleeve of a seven-inch single, the inside of which is printed with puzzling texts about Heterotopias and agglutinated resemblances.

From the Connecticut composer Joe Frawley we have his new work Emperor Of Daffodils (JFMCD06), a release which (as he points out) is conspicuously more collaborative than his previous solo works. Rachel Rambach contributes voice, Greg Conte guitar and bass, and Frawley plays piano and electronics alongside his usual array of carefully-selected and edited found sounds. (We should also note that the players never actually met up to make the recordings, and all was done “virtually” by email and swapping sound files in the post.) Frawley’s samples are apparently taken from a series of found videos on YouTube depicting a woman putting on her makeup and providing a live commentary on her actions. Where previous Frawley works have been extremely open-ended and ambiguous narratives, this one is more directed and conceptual, underscoring speculative ideas about narcissism (and something about the exclusion of males from female rituals). While sceptical UK listeners may think they’re in for nothing more than an arthouse version of the X-Ray Spex classic ‘Identity’ post-punk anthem, there is a lot more going on under the surface; the third track, for example, simply repeats treated utterances of the word ‘Lipstick’ to layers of very romantic music, and it offers everything Frawley does best; utterly simple, yet apparently impossible to fathom in its opaque mystery. Also it’s very beautiful to listen to. You probably won’t find this gem in the shops, so best to order direct from the composer.