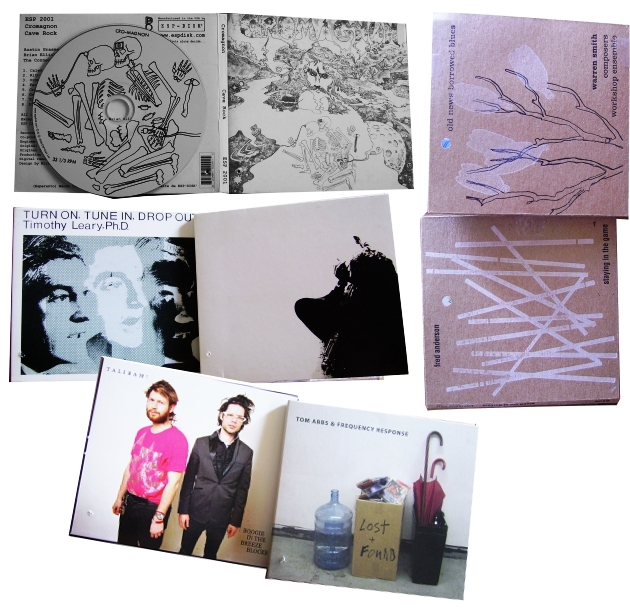 Here’s June’s dispatch of new releases and reissues from ESP-Disk’. In 1967 the Gato Barbieri Quartet went In Search Of The Mystery (ESP 1049). I never heard this particular LP by the famed Argentinian tenor player before, but hearing it now I would guess he’s paying a form of homage to a certain famous John Coltrane LP (A Love Supreme) which cast a long shadow over the golden fields of 1960s free jazz. Gato’s wild squonks, happy hoots and overblown honks, which are spread thickly like hot jam across the buttered toast of the LP’s first side, are tempered by the comparatively restrained rhythm section, which includes the great Sirone on bass and most notably a fine cello player named Calo Scott. Personally I can’t get enough of stringed instruments in free jazz (step forward Leroy Jenkins), and this dynamic though somewhat meandery LP is another treat from the ESP jazz archives.

Cromagnon were one of the more bizarre ESP signings from the lunatic fringe of post-psychedelic rock music, and in fact it would be a brave man who would characterise 1969’s Cave Rock (ESP 2001) as anything remotely resembling rock music. Casting themselves as primitive futurists, Austin Grasmere and Brian Elliot reconnected with their Neanderthal inner man by means of time machine, and recorded a series of strange grunts, shrieks, thumps and insane cackling noises, sometimes with the help of an unidentified troupe of gonks named The Connecticut Tribe (who were to Cromagnon what The Familiar Ugly were to The Red Krayola). Admittedly the songs ‘Caledonia’ and ‘Crow of the Black Tree’, the former recently covered by Ghost, do have guitars and lyrics and even attempts at melodies, but even the most broad-minded stoned-out hippy would have baulked at any suggestion of grooving along to these lumpen plods. Even the themes of this LP that might be interpreted as aligning themselves with the 1960s “free love” ethos, such as ‘Ritual Fast of the Libido’ or ‘Genitalia’, are a million miles away from something Grace Slick would have recognised; indeed this LP, which was also once issued under the title Orgasm, makes sex appear to be a dangerous, life-threatening activity. Among the wilder cuts here is the impressive ten-minute ‘Toth, Scribe I’, a growling and thumping monstrosity that has drawn comparisons to other primitive recordings (including the first Residents LP), and resembles a battle between mastodons and sabre-tooth tigers taking place in a wild thunderstorm. If you enjoy The Godz and Erica Pomerance on this label, prepare for something still crazier.

And speaking of hippies, here’s a CD reissue (the first) of the 1966 LP by Timothy Leary. Turn On, Tune In, Drop Out (ESP 1027) is a spoken word LP in which Dr Leary murmurs away in a very quiet speaking voice, presumably relating something about the experiences of taking acid. it was recorded by classical pianist David Hancock, who also (it is now revealed) faced the tedious task of editing out the incredibly long pauses between Leary’s monotonous utterances to put the material into some form that could be released. He wound up with a floor covered with tape cuttings, and this LP. Frankly, Leary has always struck me as a pretentious opportunist and a boring windbag to boot, and this record (not to deny its importance as a counter-cultural document) does nothing to dispel my impression.

From the contemporary wing of ESP, we have Talibam! with Boogie in the Breeze Blocks (ESP 4055). There’s no denying the high energy and passion that has been poured into this CD by Matthew Mottel and Kevin Shea working with their large team of very talented collaborators, but the illogical mix of numerous musical styles is utterly bewildering to me, the relentlessly fast-paced and breathless playing is exhausting, and the CD feels rather forced in its attempts to be as wide-ranging, eclectic and as “far-out” as possible. That said, it’s arguably in the Zorn tradition, and resonances may be found in other NYC schools of noisy energy music.

ESP-Disk’ also distribute records on Steven Walcott’s Brooklyn-based Engine label. Tom Abbs and Frequency Response play some very interesting improvised free jazz on Lost & Found (ENGINE 031), working to elaborate musical structures devised and composed by Abbs. The combination of instruments (tuba, cello, sax, violin) produces gorgeous and haunting harmonies, and Chad Taylor’s drumming is superlative on these sessions. Tenor player Fred Anderson leads a trio on Staying In The Game (ENGINE 029), recorded in Chicago last year, and his music is enjoyable enough but not especially “out” or innovative as jazz, and could have been recorded 35 years ago. Lastly we have Warren Smith and The Composer’s Workshop Ensemble, whose CD Old News Borrowed Blues (ENGINE 027) displays an eclectic mix of compositional styles and world music rhythms played by a large brass ensemble supplemented with African drumming.