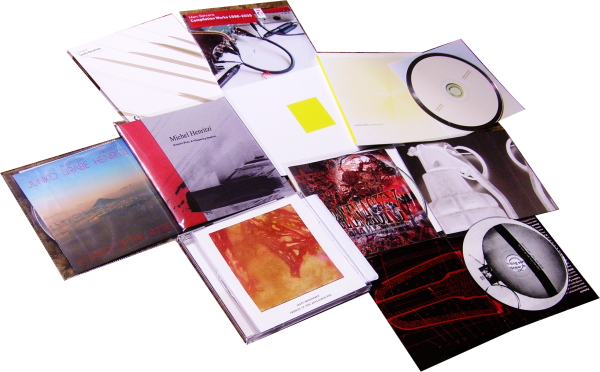 Heart and Crossbone is the Israeli noise-rock label which has provided us with much ghastly mirth in the way of evil black filth masquerading as records – for example Barbara, Grave In The Sky, and other great extreme bands with one foot in the Black Metal camp. Raxinasky are a Belgian combo playing the sort of fiercely energetic 21st-century rock noise I was once content to characterise as “mathrock”, but clearly this tag is inadequate when faced with something as insane and assaultive as The Anti-apopathiaphulatophobicoustical Days (HCB 019 CD). This fine CD is notable for including two very long tracks, one of which is 18 minutes of tangled-guitar mayhem and aggressive pounding on the drumkit, arrayed in ultra-dynamic and fast-changing blasts. It never ceases to impress me how such fully-formed bands seem to appear on the scene so suddenly. Same label has also vomited out an impressive compilation of heavy noise drawn from Japan and Israel. What Pleasing The Lord Looks Like Marriage (HCB 020 CD) contains eight solid bursts of frightful ferocity from names which are mostly unfamiliar to me, with the exception of the diabolical Poochlatz – we have Cadavar Eyes, MONEYISGOD, Zenocide, Remesh, Nerveless and more. There seems to be very little table-noise in sight, just plenty of grisly stoner-death bands playing leaden drums, feedback, overamped bass guitars and emitting their swinish, grunty vocals all in real time. Totally irresistible! Many thanks to Rani for sending these brutal bashers.

Matt Shoemaker is the Seattle sound-artist who perches midway between arrayed ranks of analogue synths, exotic field recordings from Eastern lands, and a computer with the sort of processing power that even Pixar are envious of. Here’s his new release Erosion Of The Analogous Eye (HELEN SCARSDALE AGENCY HMS 015), full of noises which certainly live up to its sponsor’s claims of “mesmerising”, what with the shimmering fields of sound that elide back and forth between semi-recognisable human shapes and completely abstracted electronic fields of impossibility. Shoemaker is evolving into a plausible matchstick we can hold alongside the twin flambeaux of murmur and López. 300 copies only of this nifty item, due to its hand-made cover artworks.

Couple of very nice recent ones from French improviser and occasional polemicist Michel Henritzi. Over time the man has built up a considerable rapport with the Japanese contemporary wing of extreme improv. On Ecstasy Of The Angels (OPPOSITE RECORDS OPCD4) he does it with sax blower Masayoshi Urabe and the singer Junko, that brilliant and demonic shriekstress from Hijokaidan. Henritzi is laying down a fantastic barrage of alienated metallic percussion against Junko’s horrified yelps, Urabe yawps into his bell like a man dying of slow poison (he plays guitar and chains too!), and this edgy record just oozes pure disaffection. This radical stuff, for me, contains a huge amount of emotion dredged from the “pure” heart of improvisation, and that’s something extremely rare. On Shinjuku Blues and Whispering Shadows (DYIN’ GHOST REC 02), we have a modernist blues album – numerous solo guitar recordings from Henritzi made in Kyoto or at home in Metz. (I wonder if he’s drawing some inspiration from Tetuzi Akiyama, that highly original Japanese guitarist who is unafraid to profess his love for blues and rock music). In all cases Henritzi’s titles here suggest a certain ennui and disenchantment with urban life, as manifested through street lights, gathering evenings, and cold shadows. Every piece is a slow nocturne, there’s plenty of minor key modes, and the eerie sound he makes (enhanced by a little echo and reverb) is a keening, doomed, whine. Henritzi couldn’t play a clichéd phrase on the guitar even if he tried, and these are 18 tracks of the most original six-stringed improvisation you could possibly wish for.

Process-minimalism at its finest in the very clean and simple record Vanishing Point (23FIVE 015) from the American musician Jason Kahn; you recall at one stage this innovative creator was thick as thieves with Toshimaru Nakamura, and they performed and recorded as Repeat. This single 47-minute mechanical drone, which appears to explore the inner workings of a metaphysical steam-factory in the sky, can also be read as a very touching and personal meditation on a death in Kahn’s family. “I can’t say exactly,” reveals Kahn with simple honesty in a five-line sleeve note, as (like all serious artists) he treads the fine line between vagueness and clarity of ideas, feeling his way along.

From the Portuguese Crónica label, there’s the Lithuanian player Gintas K with Lovely Banalities (CRÓNICA ELECTRONICA 040), an appealing collection of minimal electronica; what I like about it is that Gintas keeps most of his pieces quite short (nothing over five minutes), and each one explores a single idea relentlessly, despite temptations to widen out the sonic horizons. Through observing these two simple disciplines, he makes good and realises his intention to celebrate ordinary, everyday things. The remote and abstracted cover art by David Muth slightly undercuts this intention, but no matter.

From same label, Compilation Works 1996-2005 (CRÓNICA ELECTRONICA 041) is an astonishing compilation of music by the great Marc Behrens, one of the most severe and dessicated electronic minimalists working in this area and one for whom I have a lot of time. This 19-track collection amounts to two CDs’ worth of music, and it rounds up a number of cuts released as parts of compilations, collaborations, or submissions to galleries and audio journals. You can find here, for example, his excellent interpretation of Disinformation’s music from the 1997 double-CD Antiphony, now pretty tough to find. Plus there’s his contributions to Tulpas (the RLW sampler), sul (the Chris Marker tribute CD), and one piece which was inspired by Stockhausen’s Gesange Des Jungliche. Although very conceptual in nature, this is a set which restores my faith in the power of the mixing desk and reprocessed electronic noise. What’s more, you can download it all for free from the Crónica website.