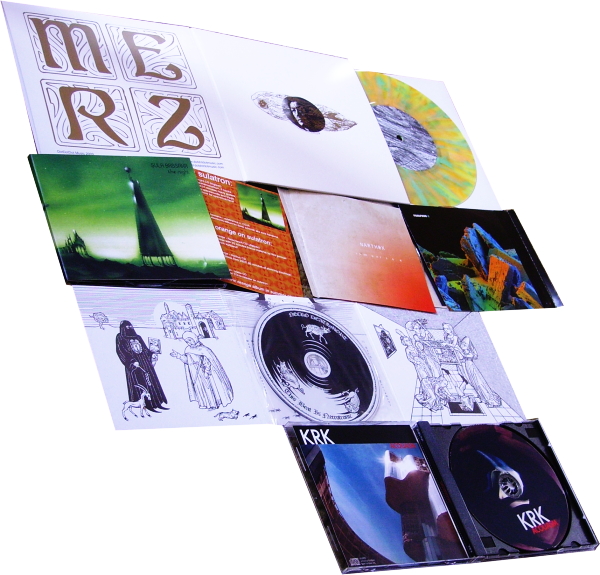 Very nice to hear from 1980s veteran American avantster Matthew Ostrowski – it seems like years since I dug his rib-tickling Vertebra record for Pogus Productions. Well, here he be as one half of KRK rattling out some lively digital electronics on Acouasm (ACHEULIAN HANDAXE AHA 0802) alongside his partner George Cremaschi, who wields a huge contrabass plus further live analogue electronic effects for additional perplexment. This record’s possessed of the same sort of unpredictable crackle and lick we’ve been hearing from some of Alvin Curran’s recent crazed cut-up experiments, with the additional bonus of being performed in real time by two very quick-thinking and hipster geniuses. Cremaschi’s quicksilver work on the double bass throws in a connection to the history of free jazz in NYC, but at that point the analogy breaks down. This is another chapter in the international ongoing task to open up undiscovered spaces in the electro-acoustic performance realms, and a great success too. Published on a tiny label owned by an experimental guitarist Hans Tammen, this is well worth clicking on your PayPal button if only just to check out what a track named ‘Humenscrump’, ‘Snirtle’ or ‘Tubicination’ is going to sound like pouring from your hi-fi.

One of the month’s more “testing” releases comes from Narthex, whose Formnction (POTLATCH P209) appears to be little more than a series of musical tones appearing in between long stretches of silence. The two creators, Marc Baron and Loïc Blairon, assembled these two pieces (each precisely 30 minutes in duration) from a carefully structured division and re-division of six improvised pieces. You may find your attention wandering over the course of one hour’s listening, but when sounds do appear (briefly) they might just startle you out of your hide.

Somewhat more eventful is a new collection by Phosphor, the pan-European combo of improvisers which includes such fine performers as Burkhard Beins, Axel Dörner, Robin Hayward, Andrea Neumann and Michael Renkel, all playing their usual fascinating combinations of wind instruments, percussion and electronics in ways that confound any normal expectations we might have from tuba, guitar or piano. On II (POTLATCH P109) it seems the Phosphorous ones have moved on considerably from their association with the “Berlin Reduced Playing” school of improvisation, and are instead going for something far more maximal with plenty of textures, dynamics, open-ended noise, throbs, squeals and sibilant whisperings. Very good.

From Jesmond Vale in Newcastle come Necro Deathmort, with their new CD This Beat Is Necrotronic (DISTRACTION RECORDS DIST19), which may at first glance appear to have been affected with strains of Black and Extreme Metal (Newcastle’s Steel Wheels record shop has an amazing stock of this sort of deadly music), but turns out to be mostly electronics – sometimes enriched with powered-up mechanical beats, or deployed in the service of harsh Ministry-styled anti-dancefloor songs, or simply in pursuit of ultra-grisly suicidal ambient-scapes of chilly mien. While overall mood is sombre, it’s also faintly wacky in places; with titles like ‘Technicolour Minstrel Show’, I’m just not sure where to put myself. Matthew Rozeik and AJ Cookson have made a convincing record, even if it’s not strikingly innovative or anywhere near as doomy or menacingly Satanic as they would like to think. The card artwork unfolds into a frieze of superb drawings by Dominic Hailstone (who has also limned art for Isis, Mogwai and Aphex Twin), wherein he executes very accomplished pastiches of medieval woodcuts to depict implausible scenes of plague deaths by the multitude, hellish punishments, and utterly strange witchcraftian antics. “The music’s better than the album title,” I am reliably informed by Darren of Distraction Records. Not half bad; this will be released in August this year.

Merzbow completists will be competing like monkeys to grab hold of Tempi / Matatabi (DOTDOTDOT MUSIC dotdotdot007v), a luscious double seven-inch artifact pressed in marbled colour vinyl. This drum-heavy set features mightily reverberous recordings made in 1974 (with Masami Akita himself doing the drumming as if hoping to be auditioned for the job of Max Roach), said beats sitting abrasively alongside very wild power electronics, the latter elements added more recently. This record will cause many an exciting frisson along the spines of readers of Surrealist poetry. In keeping with the vintage of those drum tapes, the inside spread of this gatefold sleeve features frottage artworks executed by Masami in the same year. He clearly applied his greasy black crayon to the floorboards with the same passion as Max Ernst, although the results (a fairly tame still life of curvy shapes) aren’t quite as compelling as Ernst’s darkly psychological revelations. Nonetheless, this release is another reason why Merzbow (for me) works best in small bursts (the 50-minute CD releases just exhaust me).

Sula Bassana‘s The Night (ST 0901) isn’t much more than retro prog-rock with a very cosmic theme, but here at TSP we do have a soft spot for many of the psychedelic and proggy releases on Dave Schmidt’s Sulatron Records in Austria. This release (everything played and recorded by the very talented Mr Schmidt) has the distinction of being mastered by Krautrock veteran Eroc, and indeed Krautrock diehards will find much pleasure on these home-made grooves, packed with great guitar soloing and juicy organ escapades. Even the cover is reminiscent of the Roger Dean painting for the Rameses Space Hymns LP on Vertigo.