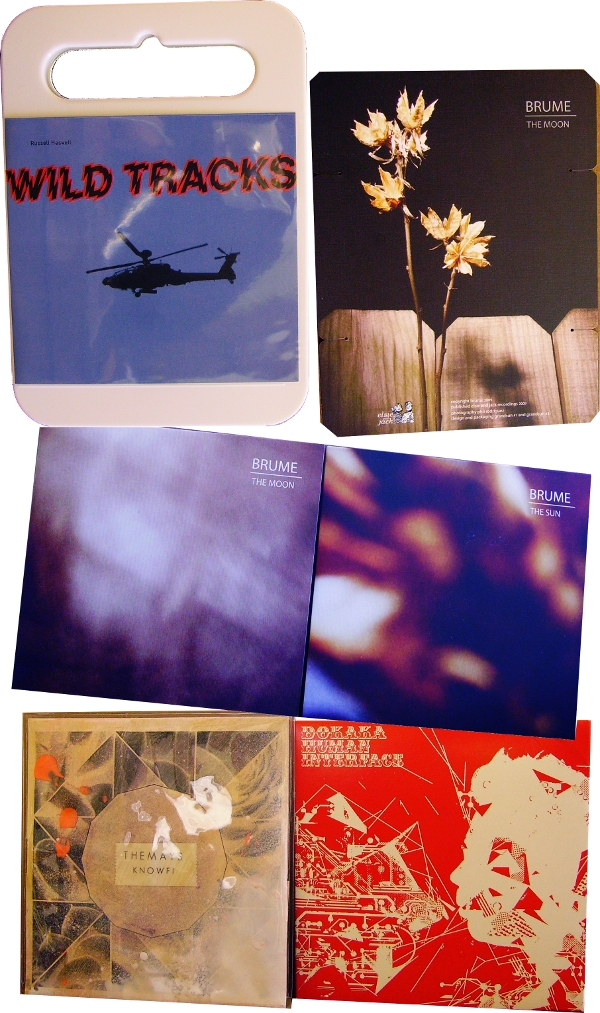 The UK electronic noise-abraso warrior Russell Haswell has made a highly uncharacteristic record called Wild Tracks (EDITIONS MEGO eMEGO 099), which compiles an assortment of recordings which are emphatically non-digital in origin. Some were intended for cinema projects and other multi-media experiences. Judging from a fairly superficial skim, there seem to be three distinct modes on offer. (1) recordings of wildlife, mostly insects. (2) recordings of the weather and water. (3) recordings of machinery and vehicles, such as a helicopter. There are some other oddities which don’t quite fit that profile, but what also comes across is an underlying sense of aggression and conflict, particularly in the titles which imply that nature (and mankind) is cruel and violent; insects and humans are depicted as predatory hunters. Even water has an unstoppable energy which makes it fearful; the recordings of the waterfall at High Force (in Durham) are exceptionally vivid (and beautiful) in this regard. Also I find aggression in the choice of subject matter, which comes close to updating the trusty old notions about ‘sound as a weapon’ that have been around since the days of Throbbing Gristle, at least. One such example is the ‘Exceptionally Loud Propane Gas Cannon Bird Scarer’ which opens the disk. A large poster covered with detailed notes and information is inserted inside the unusual white plastic box, which looks like something you could put your sandwiches in.

Dokaka‘s Human Interface (DUAL PLOVER ATR-001) is a laughably grotesque piece of vocalising work from a Japanese performer. It’s notable that he achieves an enormous range of effects with voice alone, leading others to describe him as a ‘human beatboxer’; all the work normally done in the studio by synths, sequencers and drum machines is performed by Dokaka working exclusively with his voice, through an elaborate method of multi-overdubbing. The frenetic pace of each short song (there are 88 of them here), and the shrill hyperactive tone is exhausting for an old curmudgeon like me; there’s no denying the man’s wild enthusiasm and superhuman skills, but he’s like a post pop-art painter who only uses dayglo pink and green as he daubs his repellent remade versions of advertising billboards. Still, he’s had much success in recent years, with his cover versions of well-known rock classics by Zep and The Stones spreading across the internet in mp3 form, and also appearing on a 2004 album for Björk.

From the obscure GiganteSound micro-label in San Francsico, we have this curious item by The Mays wrapped in a handmade cover and obscured by nonsense streams of letters which pass for track titles. The Mays appear to be a group of unnamed students and tutors at the Urban Music Program in SF, and may also include as members Jon Bernson, Joel Brown Tarman and Michael Falsetto-Mapp, who are all involved in outlandish projects with names such as Window Twins, Beatsauce and Ray’s Vast Basement. On Know Fi (GIGANTESOUND 019), we have a very intriguing series of quite fierce electronic music spread across 12 inscrutable and foggy tracks of all-instrumental goop. What I like about it is the loud volume, the general ‘heaviness’ of some of their reverberating bass tones, and the impolite but spare use of sampling. At their best, The Mays can be mystifying and mesmerising, working like sorcerers who conceal their work behind impenetrable symbols. By all means, do investigate this oddity!

The English label Elsie and Jack make a return to the world of tangible product with a new two CD set by Brume, the famed French tape composer. This label has a small but very select catalogue of industrial music, tapework and mild noise, and in the 1990s they were putting out records packaged with extremely high production values and unusual techniques. The Sun // The Moon (eaj018 / eaj019) is no exception, arriving in an embossed fold-out card wallet (utterly unlike any other packaging standard seen on a record rack, including the ‘greeting card’ folders from Mego), with rounded corners (much like a Web 2.0 application). Little card inserts abound. The disks themselves are housed in dinky little card wallets, and everything is printed in full colour. I mention all this because the label is not (I suspect) run on a huge budget, yet the label owners care enough to present the music in the best possible way and at considerable expense to themselves. As to the music, we have a remastered reissue of The Sun, an early cassette work originally released on Old Europa Cafe, which seems to date from 1990. The Sun is splintered, harsh, atmospheric, and packed with scary percussive noises in among the alienated and atonal synth blasts. The Moon is a recent work from 2009, a collaboration with members of Monera, and it’s a sumptuous feast of loop rhythms, samples, distorted voices and generous helpings of dark ambient electronic music so thick and sticky you could spread it on your toast in the morning. Both releases are concept records of a sort, The Moon making some sort of comment on the Apollo 11 moon landings, while The Sun is much more pagan and ritualistic in its underlying intent.