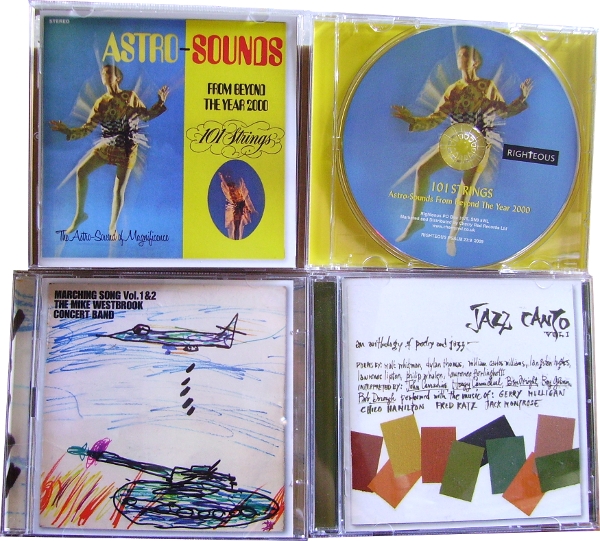 These are three tempting reissue items from the UK Righteous label, which arrived here around August this year…they feature original sleeve art (back and front) reproduced in virtually unadulterated form, scholarly notes from Dave Henderson of Mojo magazine, and I think they are distributed by Cherry Red in the UK. All for sale on Amazon last time we looked! I suppose Astro-Sounds from Beyond The Year 2000 (PSALM 23:8) recorded by 101 Strings has the most immediate appeal to all connoisseurs of sophisticated easy-listening and lounge music. Operating in the mid-1960s, 101 Strings were a jobbing European orchestra who would perform just about any task (soundtracks, cover versions) assigned to them by Al Sherman in the USA, who originally issued this LP on his Alshire Records label. This particular confection has the added appeal of a Sun Ra-styled theme, sitar playing on some tracks, and a groovy go-go dancing girl on the front cover. The lush production sound, pop beats, phasing effects, crisp reverbed guitars and electronic organ all make this a fairly irresistible package of commercial kitsch candyfloss genius, which has only improved with the passage of time. As this is well outside my area of expertise, I’m in two minds as to whether I should start investigating further. I imagine there must be underground nightclub scenes in Brighton or London where you can hear music like this by the cartload. If there aren’t such venues, there ought to be.

The Mike Westbrook Concert Band recorded Marching Songs (PSALM 23:12) in 1969, released by Deram as two separate LPs. The sleeve notes inform us, with a world-weary sigh, that original vinyls of these records now command prices of £50 each (or more). On these assured big-band pieces (there’s enough brass in the combo to equip a small power station with circuit boards for two years), conductor and composer Westbrook leads an unbelievably stellar crew of UK jazzmen, including Kenny Wheeler, Paul Rutherford, John Surman and Mike Osborne. The entire set is a thinly-veiled protest LP, commenting on the American presence in Vietnam. While the cover art implies much ‘violence’, you won’t find a great deal of outright chaotic noise on these tightly-structured workouts, rather a large range of emotions including mournful introspection, grave melancholia, and a sort of indignant slow-burning anger. In this, you have to admit that Westbrook (and British Jazz in general) was skilled at creating articulate and intelligent music out of these ethically-motivated passions; and it’s worth comparing his approach to American free jazz and the contributions of Afro-American jazzmen to similar areas of political debate. This welcome reissue also reminds us that it’s about time Westbrook, a true unsung British maestro of jazz, had a dedicated reissue programme for his early rare works.

Jazz Canto Vol 1 (PSALM 23:4) is a true curio, originally issued on World Pacific Records in 1958. A wonderful relic arriving at the tail end of the beatnik era, it features the poetry of such scribes as Dylan Thomas, Walt Whitman, Ferlinghetti, William Carlos Williams and Langston Hughes, recited by Bob Dorough, Hoagy Carmichael and (most notably) the actor John Carradine. They do this over laid-back, stark and subtle jazz settings from Chico Hamilton, the Bob Dorough Quintet, Ralph Penna, Fred Katz, and the Jazz Canto Ensemble. An astonishing record which blends a distinctly American approach to writing (and reading) poetry with the all-American musical form of jazz, to create an exciting and unusual hybrid; one of the many things that comes across is the utter conviction and seriousness of the performances. The importance of this record is such that it has, I think, been recently revealed (by Kevin Courrier in his book in the 33 1/3 series) as a specific influence on Captain Beefheart and the making of Trout Mask Replica. Now, who can resist that?