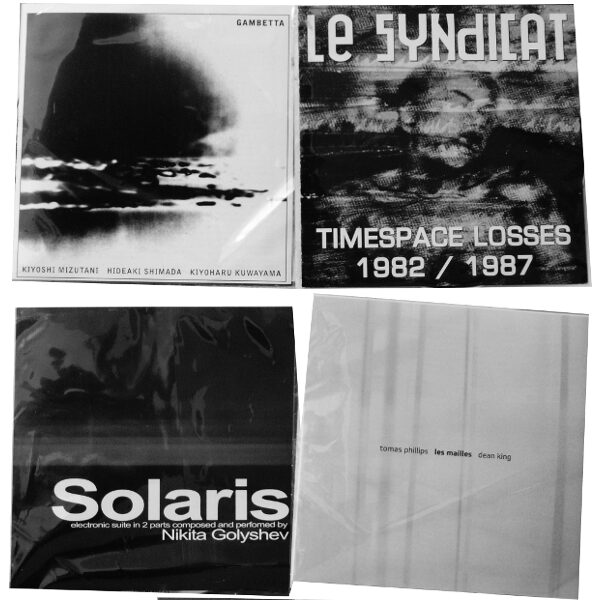 Boy, am I feeling scaly tonight. What I need is a good body scour with these new releases of electronic ambient noise from the Russian Monochrome Vision label. Gambetta (MV27) is not a bad place to start, with its five lengthy examples of abrasive improvised noise from three Japanese ginks, the redoubtable team of Kiyoshi Mizutani (original member of Merzbow), Hideaki Shimada (Agencement) and Kiyoharu Kuwayama. Their startling combinations of feedback, violin, contact mics and live electronics produces bucketloads of crispy, bleak tension on these 2001 recordings. French composer Bernard Donzel-Gargand regales us with many iron-and-concrete statements on Still to be a Storyteller, (MV29) a sampling of his excellent semi-narrative tapework from 1985 to 2007. This little-known genius deserves a place alongside Lieutenant Caramel and Lionel Marchetti for his imaginative combinations of mysterious noises and opaque whispering voices, recounting obscure poetry into a void of buzziness and treated tapes.

The duo of Jason Kahn and Richard Francis is showcased on MV-28, with four pieces of improvised wispy and coarse sound art produced in various locales in recent years, using computers, electronics, an analogue synth and percussion. This fits the picture I have in my head of Kahn’s current work, where he seems intent on exploring thin washes of sound until he sees holy visions at the other end of a yellow tunnel. Spartan droning Spaniard Francisco López is treated to a double CD set called untitled (2006-2007) (MV25), bringing you a total of 16 substantial compositions and a mixed collection of reworkings of soundfiles contributed by other prominent droners, reprocessed versions of music performances by jazz-improvisers, and field recordings from the Amazon. Everything is bleak, slow and emptied out, but as usual López achieves his own highly-distilled brand of minimal beauty. No less minimal is Les Mailles, (MV26) a single 39-minute piece by Tomas Phillips and Dean King, both currently living in the US. This is an extremely washed-out example of work where the composers become preoccupied with tiny events, exploring the ‘grain’ of digital sound in an intimate way, producing inhuman and challenging music which seems to be constructed from the insides of clouds.

Russian electronicist Nikita Golyshev spreads his analogue wings wide on Solaris (MV20), subtitled an ‘electronic suite in two parts’. A rising star of the Russian underground since 2003, Golyshev has made numerous private press releases spanning the genres of metallic noise, dark ambient and bleak drones, always allowing his machines to lead him where they will with their blind unthinking eyes. Solaris may not be directly connected to the Edward Artemyev music for the famous Tarkovsky science-fiction allegorical film, but it still induces a pleasant state of spacey weightlessness while listening. Lastly we have a devastating collection of rare tracks by Le Syndicat, a French art-brut project from the early 1980s who won their spurs as Industrialist visionaries with their ferociously urban performances of trashy noise, celebrating everything from broken TV sets, dismembered Walkmans, vile feedback, and radio static. Timespace Losses 1982-1987 (MV30) picks 16 choice cuts of their vicious, militaristic work previously released on (now rare) cassette tapes and compilations, many of the titles rubbing our noses in the stink and squalor of everyday life in a stark, cruel manner. Thanks once again to Dmitry for his unstinting supply of these distinctive releases of hidden gems.