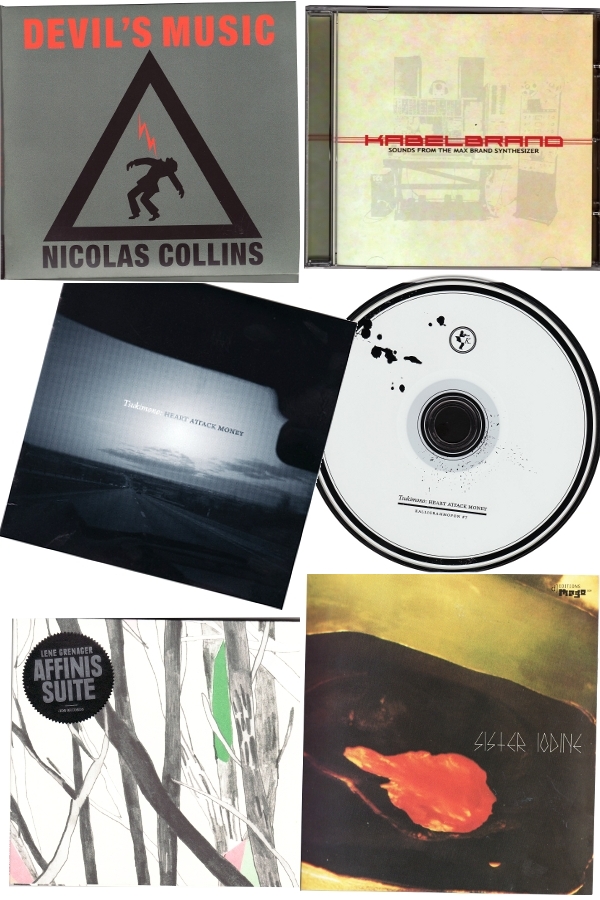 Nicolas Collins is an American composer-performer who made his own unique brand of dangerous and menacing sample-based music in the 1980s, and is the latest to receive the luxurious archival rescue treatment from the Japanese label Em Records. Devil’s Music (EM RECORDS EM1086DCD) reissues in its entirety a 1986 LP of this name originally released on the Trace Elements label in New York, and this double-CD set is fleshed out with live concert material and a radio commission. Collins used a micro-computer and a modified primitive mixing desk, and sampled sources from dance music, spoken word records, easy listening and classical music to create astonishing dense packages of information-rich, rhythmically heavy and generally ‘impossible’ music, clearly influenced to some degree by hip-hop sampling records from the same era and done with as much excitement, in an extremely avant-garde way. Can’t recommend this release too highly, and it’s amazing to learn that Colllins will be performing live in London in January next year. While you’re waiting, snap this authorised release up quick (there’s a double vinyl edition too!)

Lene Grenager is a Norwegian composer with her very credible Affinis Suite (+3DB RECORDS 009), composed in recent years especially for the Affinis Ensemble, masters of a repertoire of Norwegian contemporary music. These twisted lines and curlicue exploits, heavy on the dynamics and tight scoring, may put one in mind of a certain period of Frank Zappa’s work, especially with their jazz-esque arrangements. Grenager allows other interpolations, though; one of the saxophonists comes close at times to delivering atonal free-noise solos in a semi-controlled way, and the prepared piano of John Helge Sætre (using sheets of paper to dampen the hammers) is also an eyebrow-raiser in this context. A most engaging package which functions on many levels of the modernist sweet trolley.

Sister Iodine are a French trio of ugly avant-noise punks active since the 1990s apparently, dealing out the cat-o-nine-tails in sound using an ungodly combination of guitars, drums and the Korg synth all played and smashed together in ways more akin to stage-managing a traffic accident on the Lille underpass than anything we normally associate with music performance. The album Flame Desastre (EDITIONS MEGO DeMEGO 009), which I currently hold in my asbestos gloves, was recorded last year and originally released on vinyl by Premier Sang, whose owners violated numerous health and safety regulations just to get this scorcher pressed into the grooves. With titles like ‘Terminal Pain’ and ‘You Burned’, this pummeling ape delivers multiple high-energy bursts of apocalyptic rock-inflected noise performed with insane, incredible dynamics. A must!

From Sweden, that burgeoning land of a particular bittersweet strain of melancholy sound-art which enriches my current gloomy state so effectively, I’ve a CD by Tsukimono who I think I first heard on the Gothenburg 08 compilation with the memorable ‘Moan Jar’. Heart Attack Money (KALLIGRAMMOFON #7), all the work of Johan Gustavsson who modestly credits himself with ‘assembling’ the music, is a beautiful set of introverted, lonely and sorrowful ambient music which grows increasingly abstract over course of the disc. Among the many effective moments is his imaginative and original setting of Billie Holiday’s ‘Gloomy Sunday’, which consists of replaying the original record through filters in the midst of a long stretch of immersive blue pools of weeping fluidity. With graphic design by Thomas Ekelund inside the moody booklet of evocative twilight photos, this is perfect fodder for the onset of the Scandinavian winter.

Another piece in the jigsaw puzzle concerning Max Brand, one of Europe’s most overlooked innovators in 20th-century electronic music, whose work first came my way with an excellent double CD on the Rhiz label with tapes from his archive and remixes of same by contemporary Viennese electronicists. In quite another vein is Kabelbrand: Sounds from the Max Brand Synthesizer (MOOZAK MZK#002), which delivers amply on the promise of its title. What sounds! The veteran machine in question was built for him by Robert Moog, at a time before said Moog had started on his road to commercial success, and is described here as ‘a reconstructed and enhanced Trautonium’. Performed here by Clemens Hausch, Benedikt Guschlbauer, Gerald Krist and Ulrich Kühn are 12 pieces of their own devising which display to a high degree of prominence the uncontrolled and impolite grumbly analogue belches of this smoked-up, smouldering circuit-board dragon of the synth world. The collection is rounded out by two unreleased and remastered Max Brand recordings from 1970 and 1974, one of which – the 28-minute ‘Ilian 4’ – was composed very late in the composer’s life and was intended as a ballet piece. Apparently released without much hue and cry, this record is both historically important and a great collection of exciting music and sound, pretty much essential listening for any serious investigators of modernism.