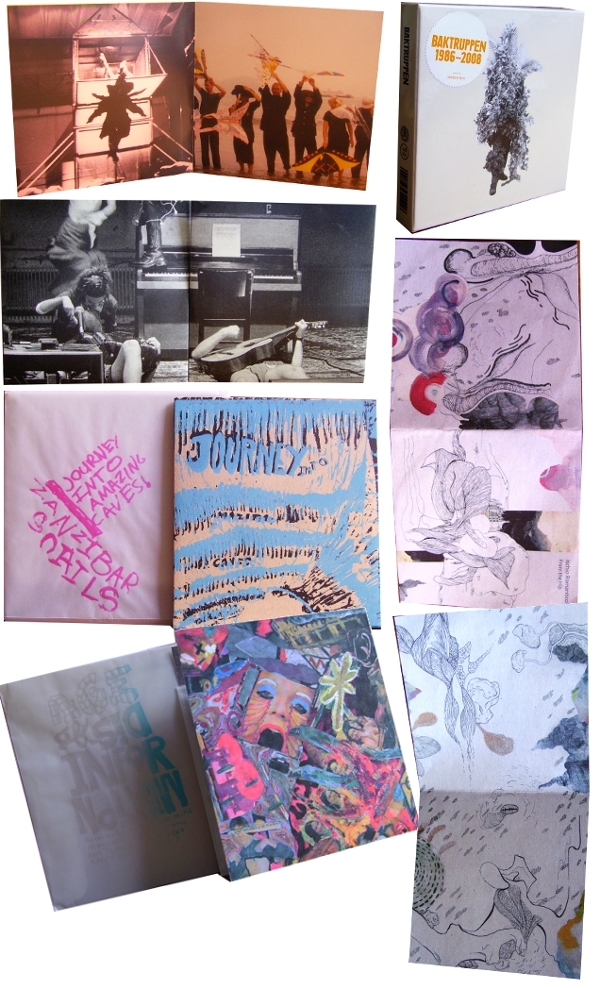 Very intriguing boxed set of lunatic brilliance from Baktruppen – the collection entitled 1986-2008 (+3DB 004) attempts to make some sense and collate the sprawling, indefinable work of this Norwegian performance art / music theatre collective, who have been amazing and puzzling audiences across Europe for over 20 years. Actually there’s very little contextual information in the booklet that goes with these three lengthy CDs, but there are lots of amazing photos of the guys and the gals looking like Bohemian wrestlers and refugees from an Albanian circus, their appearance having nothing whatever to do with conventional music, or theatre for that matter. Although some audiences may have been fortunate enough to witness their actions unfolding at a music festival, a lot of the time it seems that these zanies would perform anywhere but on a stage – in galleries, libraries, sports arenas and tunnels. Cognoscenti in Germany have loved them ever since they performed an action at the fall of the Berlin Wall. Spinning these fragments of deranged sounds, crazy music and incoherent babbling gibberish conveys but a fraction of the energy and excitement (I guess) of what it would be like to experience these liberating grotesques in the flesh, but it’s still a great listen regardless. Python-esque silliness abounds, everything is very loose around the edges, creating the sort of perplexing stream of information where you can fill in the gaps and make up your own little stories as you go along. Seems to be like a family-rated, non-violent version of a Hermann Nitsch action. I always imagined the early Faust live performances would be as much fun as this! All credit to this Norwegian label for rescuing an important part of their country’s loopy heritage.

From Texas, the Mayyrh Records label has been busy and produced three more limited-edition releases since we last checked in, all of them packed in nice colourful screen-printed or Xeroxed card wallets inside permatrace envelopes. Zanzibar Snails are the noisy improvising crusaders built around the core duo of Nevada Hill and Michael Chamy, well represented on a new set called Journey Into Amazing Caves! (MYH06) This offers a CD of their uglified electronic and oscillating spillages recorded in 2006-07, producing slowly swelling sounds that are every bit as craggy as the stalactites they purport to depict. The release comes with a DVD called Carbage Goma, a more recent musical performance by the Snails enhanced with wild visual additions from David Lee Price (who also joins the band here); there’s also a welcome return from Josh McWhirter and his diabolical viola. You won’t see much of the band on this mind-murking visual explosion from Price, but you will see plenty of dazzling computer effects, colour-field experiments, and surreal close-ups of ill-fitting objects that produce a memorable psychedelic broth. Also from the label, Age Of Disinformation (MYH08), a collaboration between six Texan players from similar-minded underground venturers, calling themselves a ‘lucid nightmare supergroup’. Playing lots of electronic instruments, keyboards, percussion and guitar, their aim was to make some sort of subconscious statement about the contemporary problem we all face of information-bombardment, and the possible damage this may be causing to our collective spiritual condition. How ambitious…what results is a slowly rotating whirlpool of over-filled musical and verbal gibberish, with no clear guidance to the listener about how to navigate around this swamp of vaguely unpleasant fetid noise. Very compelling! Also out: D&N 2 (MYH07), a collaborative effort between Hill and Price, not yet spun as I can’t bring myself to get past the strange hirsute contents of the envelope.

From the UK, Ischio Romantico with a total gem of a CDR release called From The Hip (SHADAZZ 10). This is Adam and Jonathan Bohman in collaboration with two other heroes of the UK underground, here performing under the aliases of “Leonard Aspen” and “Roger Boulding”. Currently attracting much interest at the radio station Resonance FM, and no wonder. The Bohman brothers are a national treasure for many of us, and on this uncanny little release they do not disappoint. It’s fairly impossible to tell what is going on here, but broadly we seem to have the amplified-junkyard work of the Bohmans colliding in exciting ways with the bewilderingly strange turntable work of the other pair. The notes would have us believe that these eight pieces comprise a ballet in four parts, an ‘Ealing comedy with Helmholtz overtones’, and a dystopian vignette. The release comes with a great illustration by the visual artist Jussi Brightmore, whose exceptional line and colour work I do urge you to seek out. He may or may not have some connection to the Brighton improv combo I’m Being Good. Many thanks to Luke Fowler (maker of the excellent documentary about the Scratch Orchestra) for sending this masterpiece of beautiful absurdist genius. Unfortunately I have absolutely no idea how you can get a copy!