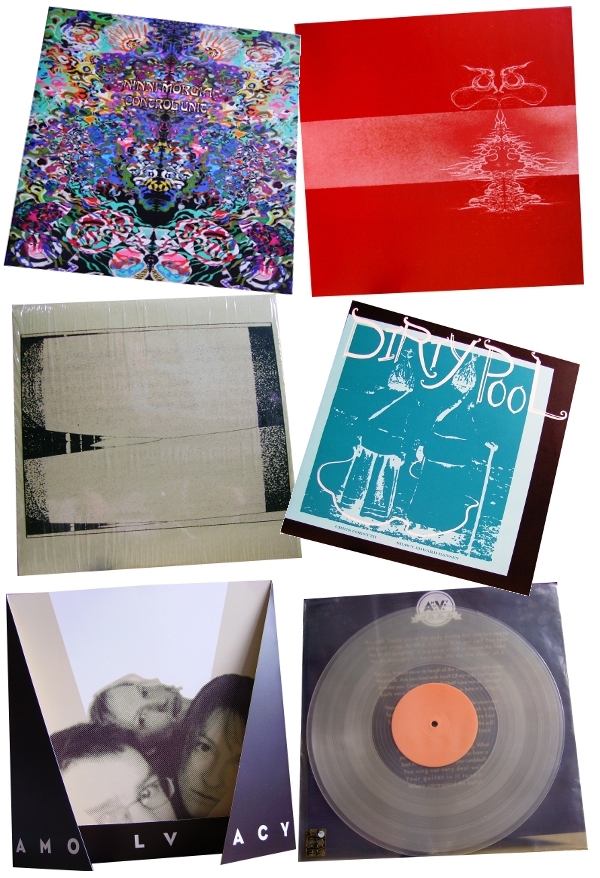 The Ultramarine Records label used to be based in Brooklyn, now it’s in Italy, but its New York allegiances are still somewhat in evidence…pleased to receive four vinyl items which represents almost their entire output to date. Ninni Morgia Control Unit (UM005) is a double LP by this Brooklyn guitarist who teams up with veteran free honker Daniel Carter and drummer Jeff Arnal, to create four sides of not-unpleasant jazz-rock fusion music. Superficially, the sound of the album seems to be in thrall to the 1970s – Bitches Brew, Weather Report and late Soft Machine records are some obvious touchstones, but I’m hoping to find time to engage with Morgia’s soloing work (he also plays electric sitar, autoharp, keyboards and percussion) to discover something original he may have to offer us. Scott Colburn’s mastering gives the set added dynamic punch, and SpiralSmokey provided the dazzling cover art.

Chris Forsyth is the Brooklyn guitarist who can do no wrong for me. Here he is with Shawn Edward Hansen (from Phantom Limb and Bison) with Dirty Pool (UM002), a gorgeous LP of instrumental music blending Forsyth’s golden-sunshine notes with the balmy Farfisa organ work of Hansen on these 2005 recordings. The entire A side is devoted to ‘I First Saw You’, a totally gorgeous continuous improvisation played in a single key inhabiting some zone of paradise where the best of Popol Vuh meets up with languid psychedelic musings. Forsyth’s confident strokes and licks contain compressed moments of pure genius. The cover here is attempting to emulate the look of an old Folkways or Origin Jazz Library LP, both of which wraparound paper pastedowns on black textured sleeves.

Amolvacy is an ad-hoc trio comprising two New Yorkers, Dave Nuss (No-Neck Blues Band) and Sheila 16 (Laboratory Theatre Group), joining forces with English wackster Aaron Moore from Volcano The Bear. A La Lu La (UM003) situates itself quite some way from the lengthy explorations of No-Neck, offering rather short and condensed tunes where the two guys demonstrate instrumental prowess with percussion and acoustic instruments, throwing out stark and wayward notes with inspiration. Over the top of these faux-primitive rhythmic backdrops, Sheila 16 caterwauls her unintelligible free-form wailing in shrill tones. Homage to various hip underground records from the 1960s is implied in these musical statements, and the back cover is printed with lines of quasi-Beat Poetry. Pressed in clear vinyl and housed in a very unusual fold-out cover with flaps.

Temperatures are of course English, the London duo of Peter Blundell and James Dunn, for whose recorded output I have cultivated a very soft spot of earth in the garden of my mind. Eksra (UM004) shows them using bass, drums, and synth as though the instruments had only just been discovered out of an archaeological dig, and the players are two scientist-musicians speculating wildly as to the original purpose of these unknown artifacts. Most effective is when Blundell adds his hideous grunting vocalising to certain tracks, arriving more successfully to my mind at the sort of primordial semi-conscious holy utterances that Sheila 16 claims to be aiming at. Eksra is not as outright brutal as their early work, yet still delivers many crushing tromps and bludgeoning moments. I have no idea what the image on the front cover could be, but it feels decidedly sinister, like the printout from a ghastly machine that measures psychic disruptions in the atmosphere.