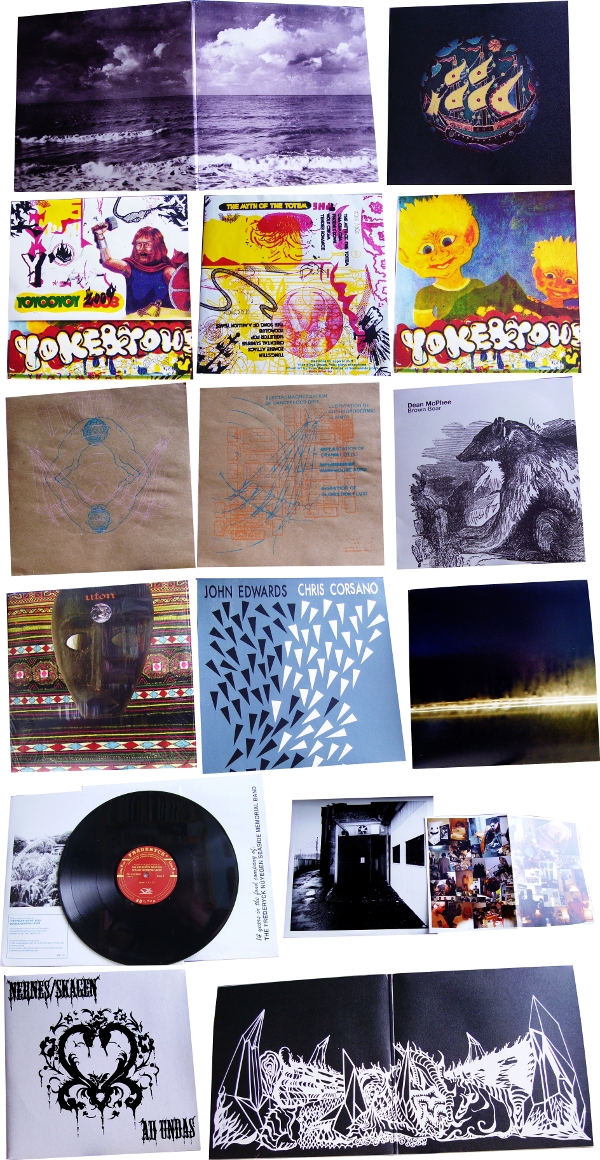 Thought it was about time to hoover up some of the terriff black plastic consumables that have been sliced from the great musical Chorizo in the sky. Some of these date back to September and October of 2009 as regards when they marched in through the flaps of the Sound Projector tent. Some sound samples can be found on podcasts here and here.

From Belgium, we got a couple nifty 12-inchers courtesy of Timo Van Luijk. Onde describe themselves as a ‘free-form improvising music trio’ active since 2006, all of them emerging from the wreckage of the famed semi-industrial project Noise-Maker’s Fifes. On the LP Purple, (ONDEMUSIC 003) Greg Jacobs, Timo Van Luijk and Marc Wroblewski use just violin, electric guitar, and pieces of metal for percussion, to produce two side-long suites of superb open-ended pulsating instrument-buzziness that are bound to appeal to Krautrock listeners (especially those who favour the spastic walloping of the early Faust). Onde perform with confidence, like seasoned veterans; they contrive to give their music a slightly bizarre and distant vibe, while still weaving a compelling spell over the entranced listener – the constant mesmerising pulse which runs throughout ‘Vloed’ probably helps with this. Comes in a sturdy gatefold cover with a purple picture of the restless ancient ocean and is highly recommended. Timo also sent a copy of Voile Au Vent (EDITIONS LA SCIE DORÉE SCIE 709), a side project of his with Frederick Croene which offers four experiments in perplexing electronic arrangements, not unlike exploring the surface of the moon. Decorated with cover image of an old clipper ship.

The LP by Yoke & Yohs is called The Myth of the Totem (YOYOOYOY YOKE & YOHS LP 001). Naturally one’s attention is mainly grabbed by the outlandish cover, a screenprinted eye-scalder produced by the great Danish visual lunatic Zven Balslev, using intense full-strength colours, scattered collage, mad lettering methods and faux-primitive daubs to lasting effect. The music is fantastic too. When I first spun a few of these blistering belters, I was convinced I was hearing a souped-up customised electric guitar of such magnitude that you could cheerfully use it to crack open a few skulls. Turns out the whole LP (using distortion in the way that some painters use red paint) was made with just saxophone and drums, but produced with zero regard for good taste, common decency, or public health, and to judge by the energy levels captured on this beautifully disgraceful release, one assumes that Yoke & Yohs are only permitted near musical instruments in between wearing of their respective straitjackets. Titles such as ‘Skeletor Pop’, ‘Zombie Attack’, ‘Zoomglub’ and ‘Wolf Cream’ should give you some idea of the range of high genius-idiocy impulses sparking through their deep-fried brain cells. A total must!

Decapitated Hed‘s Subversive Club Processes (SPLEEN COFFIN SP-16) is a 45rpm avant-garde techno bruiser sent to us by Tim from the Spleen Coffin label in Baltimore. Five essential cuts of snarling, mechanised low-range bass-pulsations that instantly transform the dancefloor into a warzone; you’ve rarely heard such naked, brooding hostility pouring off th’ grooves of an innocent disco-biscuit. Leaving no room for its victims to breath, this self-assured little monster sets about the grisly task of nibbling away your ligaments and tendons with its sharp little rodent teeth. Note cover art, printed on flimsy brown paper, which suggests by overprinted lines the pseudo-scientific processes that will be used to carve up our collective anatomy and implant such unwanted devices as ‘Cranial Styli’ and ‘Glowstick Fluid’ into our bio-systems. Just great! I’m tempted now to investigate their Looped Holes CDR, or the double-cassette box of their early recordings…

Dean McPhee‘s Brown Bear (HOOD FAIRE HDFR002V) is a lovely 45rpm record from this great Yorkshire guitarist whose beautiful music can persuade you in less than two minutes that all is perfect with the world. His superb Water Burial split seven-inch (noted in the current ish) made me an instant convert to this man’s very direct and simple work. 500 copies only of this beaut were issued in October 2009.

Uton‘s Unexplained Objects (DEKORDER 037) has renewed my interest in this mysterious droney Finn. Recent releases by Jani Hirvonen of Tampere have struck me as interesting, but a little cluttered in their use of overdubbage and layerings. This one leaves a lot more ‘white space’ and room to breathe, and allows Uton’s unusual sound treatments to really shine. Apparently the record has an ‘outer space’ theme, though you wouldn’t really have guessed that from the enclosed and intimate sound of this LP.

The duo of John Edwards and Chris Corsano can be heard on Tsktsking (DANCING WAYANG RECORDS DWR004), the latest LP from Anna Tjan’s home-made label. A live document of acoustic double bass and drumming from these two high-profile improvisers from the UK and USA respectively. I was initially taken aback by the very restrained tone of this quiet record, but listen carefully at appropriate volumes and you can reveal the detail of their craft; every sound is stitched into place like fine needlework, nimble fingers moving at lightning speeds. Screenprinted art cover and a sleeve note by Evan Parker enclosed.

New Zealand player Peter Wright overdubs everything he possibly can on top of his open-tuned 12 string guitar on Bright Falling Star (RELEASE THE BATS RTB #51). This ponderous and slow droner was made under trying circumstances in a squalid London flat and its title is taken from a David Bowie lyric on the Low LP; Wright intends to convey something about ‘glittering decay’.

A true curio is this instrumental record by James Beckett, called 14 Years in the Fond Company of: The Frèderyck Nùyegen Seaside Memorial Band (EDITION KÜNSTLERHÄUSER WORPSWEDE). British South African artist Beckett seems to have a background in installation art, with numerous exhibitions, residencies and publications under his belt dating back to 1999; only recently has he started making inroads into sound-art. What we hear on the record is some astonishing music made with hurdy-gurdy and percussion, apparently recorded in a Berlin studio last year. Very little information on the cover; it’s not clear if Beckett is playing the music himself, or simply offering us a distillation of recordings he made in the field, but it’s a fantastic listen. 200 copies only from this German arthouse publisher, who also sent us a fairly nice LP of minimal electronics by Ignaz Schick in a box.

Utmarken (RELEASE THE BATS RTB#50) is a dandy ten-inch LP which Matthias Andersson has put together to celebrate the 50th release on his Release The Bats label. Over seven years, Utmarken has seen service as a venue, a record shop and a rehearsal space in Gothenburg, doubtless playing a key role in the development of that city’s currently thriving musical activity. The album compiles a track each by Street Drinkers, Källarbarnen, White and Ättestupa, respective members of whom can be seen on back cover (and there is a little overlap between two of these projects). The one I keep playing so far is ‘Daily Bread’ by Street Drinkers, which is a kind of skeletal reinvention of pop music, using repetition, loops and minimal arrangements to support a wistful echoed vocal. A splendid item with a heart-warming colour insert; Andersson is far too modest about his achievements.

Nernes / Skagen are a Norwegian duo, Kjetil Nernes and Stian Skagen who use just bass guitar and synth (plus some vocals and other devilish devices) to produce four sides of heaving sub-sonic filth now unleashed on the world as Ad Undas (FYSISK FORMAT FY011). Lavishly packaged double LP which in its look and sound is somewhat indebted to the past works of Sunn O))), but listeners looking for exciting variants on the avant-death metal sludge formula in their diet can purchase this growling beast with confidence. I suppose their real secret weapon is to use a stack of amplifiers roughly the size of downtown Manhattan, as evidenced by their live tour of the US east coast in 2008 which required the services of many a haulage truck. One need only imagine the flattening effects of such a PA, which may not translate seamlessly onto vinyl, but they certainly have a good shot at it. The duo see themselves as guardians to the entrance of the underworld, and align themselves with minimal art / deep listening music as much as they do with stoner, doom and the magick songs of Current 93.