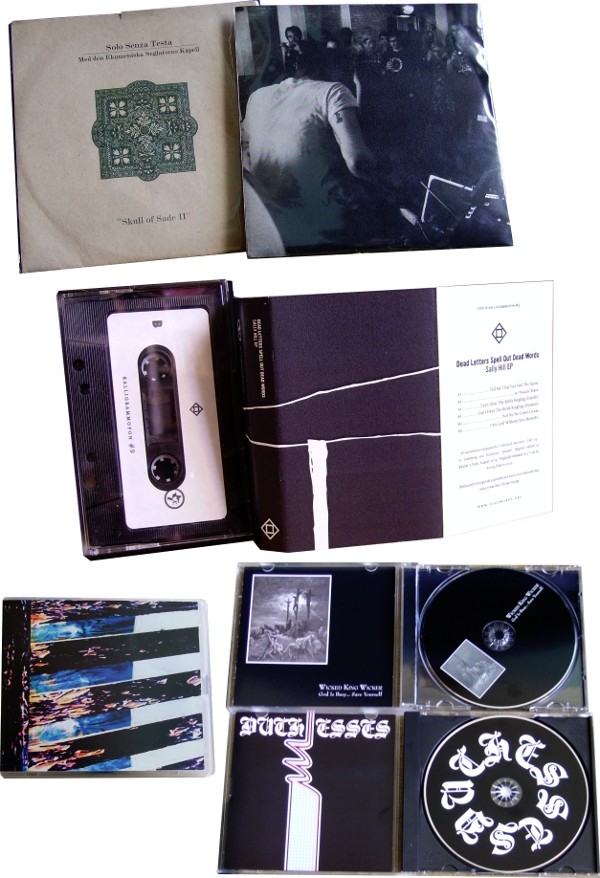 Goodly bundle of items arrived in October 09 from the Swedish Kalligrammofon label, including two excellent seven-inchers…Solo Senza Testa offers us his unique take on dub music with Skull of Sade II (KALLIGRAMMOFON #11), an action which apparently continues a thread begun many years ago by its creator Jonas Rosén, when he recorded a dub track on an album for his previous band The Female Anchor of Sade. Spun at 33 revolutions, this record filters dub mixing through a wall of lightly distorted electronic noise and uses echo and reverb effects with a sparing, delicate touch. Flip it over for a ‘version’, which if anything is even more minimal than the A-side…this fine record, imbued I might add with a few puzzling overtones from its maker (something about an ‘enormous Red Elephant’), is not derived from the school of King Tubby and Lee Perry so much as post-punk records from 1978-1979 that attempted to emulate dub effects. I was also reminded of French 1980s cult electronic band Metal Boys, whose ‘Love In Dub’ on their sole LP Tokio Airport is a firm fave of mine.

Tsukimono is represented on the other seven-incher, Gotta Sing / Gotta Dance (KALLIGRAMMOFON #13), a superb little slice of improvised electric guitar which shimmers with distortion and harmonics, and is played with all the restraint and economy we are learning to expect from the very talented Johan Gustavsson. The front cover shows, in monochrome black and silver, a small and intense audience reacting with dream-like puzzlement (and digital cameras) before Tsukimono’s hypnotic work with the axe. 100 copies only of this, a joint release with Lady Godiva Operations. We also received his gorgeous avant meta-blues CD Heart Attack Money, noted here in December.

Dead Letters Spell Out Dead Words meanwhile has put out a little EP called Sally Hill (KALLIGRAMMOFON #9) onto a 20-minute cassette tape, a re-release of one of his very first records from 2005. As you may know we devote much ear-time to this heroic and depressive Swede, whose records do much to speculate about the afterlife while also exploring the furthest extremes of the mental whirlpool in which its creator often finds himself embroiled. Sally Hill, including an opening track which is inspired by girl-group records of the 1960s, is filled with delicate, mournful, layered drones which express an insatiable longing and wistfulness, carefully worked through over long periods of time.

Pat Gillis wrote to us from Alexandria in VA earlier this month. As owner-operator of the HC3 Music label, he also sent a copy of his new release of unkempt electronic devilry released under his TL0741 guise. Magnetic Injuries (HC3TLCd2) is a new edition of a work previously out on Panic Research Audio with new tracks; Gillis does everything using synths, effects and tape manipulation, impressively performed in real time. This risky approach does much to add tension and crackle to his highly-abstracted concoctions, which can work very nicely when spread out to over 15 minutes as on the impressive ‘Auricle’ here, although some may prefer the pop-tune economy of ‘Ur Chokt’ and ‘Through Blast Radius’, which make their respective points in around three minutes. TL0741’s splurgy, paintbrush charged-up approach to electronic music is refreshing; he won’t bludgeon the listener with airless noise, even if he risks getting his gumboots sucked into the mud and murk that swirls around the feet of those who dare to flirt with analogue equipment.

However for those listeners who feel that they would enjoy a nice spell of bludgeoning, we have just the thing for you. Wicked King Wicker is part of a shipment of new goodies from UK label Cold Spring Records, home to many a depressive and dismal blast of grimness. God Is Busy…Save Yourself (CSR125CD) is the 6th release from this American project whose extreme take on avant-garde Black Metal results in overpowering blocks of distorted monstrosity, which cannot possibly have been created merely through the use of guitars, mics and amplifiers, save such equipment were purchased from a music store owned by Mephistopheles himself, using a scorched credit card issued in Chorazin. Three ultra-long workouts are filled to the brim with sheer poisonous hatred which billows out into the atmosphere like irradiated gas every time you spin this bloated beast. Themed vaguely on a concept to do with the Crucifixion, the record’s artworks use old engravings on an all-black field to increase the general sense of futility and despair, and the inserted instruction ‘Nails Not Included’ directly implicates all those who buy this item, urging us to join in the abominable persecution of Christ. ‘Buffet and scoff, scourge, and crucify me’, from John Donne’s Holy Sonnet XI, seems an appropriate verse to utter under the circumstances.

From Apop Records, we have Duchesses with their Estupet CD (APOP033) which I think landed here several months ago. This all-female group fling themselves headlong into their work with fiendish relish and gusto, producing an uncanny hybrid of Black Metal, punk, noise and primordial drumming-chanting racket that is, at times, scorchingly unforgettable. What these gals do with their massed catty vocalising will leave you mentally scarred for many a moon, so don’t risk playing it after midnight. Their regular production sounds eerie enough, but this release is weirded-up to an even more extreme degree through the inclusion of several far-out remixes of selected tracks, courtesy of the mutated hands of Weasel Walter, Sunshine Militant Childrens Hour, Ops Spirits, Qulfus, and Blanketship. I’m far from surprised to learn that this diabolic quartet emanate from California, home to many a Satanic dabbler, and it’s troubling to learn their average age is 19, considering the depths of depravity they so convincingly plumb in sound.