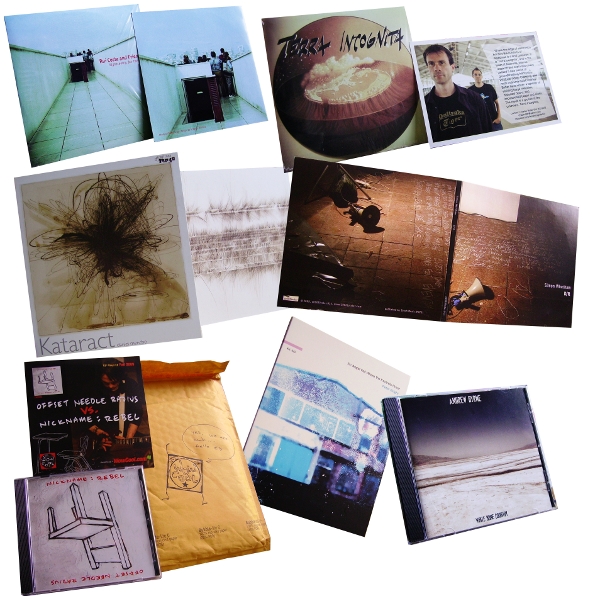 Couple of items from the 1000Füssler label arrived here in August. This Hamburg label has tended to seek out quite extreme and difficult experiments in the field recording area, and Rui Costa‘s Sightseeing for the Blind (1000FÜSSLER 012) could probably fit quite comfortably within that general description. In 2005 he tried to find his way around Lisbon effectively using a couple of binaural microphones as his eyes, soaking up whatever these metallic monsters could ‘see’ at the end of their hypersensitive tips. The resultant 26 minutes of unusual murmurings, clankings and echoey claps has been transformed into a species of sound composition, while Costa ruminates on the psychogeographical implications of his sonic maps. To assist him with further imaginary cartographic activities, five other sound artists contributed short works to this set: Marc Behrens, Maile Colbert, Bill Jarboe, Pali Mersault and Gregory Büttner. The once-familiar urban space is now, for me, transformed into a completely alien zone of whited-out vistas with a dank mist hanging over all.

From same label, Simon Whetham‘s D/R (1000FÜSSLER 013) is the output from a performance-installation work he instigated in Estonia under the project name of Co-LAB ’08. Some friends and collaborators assisted in these very extreme events which involved radical transformation of field recordings, a speciality of this UK-born composer, and also some quite physical changes in the gallery space too. Absurdist performance actions, carried out by Yoko Ishiguro, were also part of the events. Very little of this drama has translated onto the slow-moving and anonymous recordings we hear, but there is plenty of bewilderment and strangeness. The photos on the cover seem to show us the remnants of excitement which we missed hours ago; the gallery space, chalked writings on the floor, is strewn with furniture and apparatus in a mild state of disarray.

New York composer Andrew Byrne had White Bone Country (NEW WORLD RECORDS 80696-2) released in August last year. On it, the prepared piano of Stephen Gosling is accompanied by the metallic and clinky percussion of David Shively. There’s a 17-minute piece called ‘Fata Morgana: Mirages on the Horizon’ which will be of interest to fans of the cinema of Werner Herzog, but the main event is ‘White Bone Country’, which is intended explicitly as narrative-styled portraits of the sort of enormous and bleak desert landscapes you find in North America. As such, Byrne’s compressed and precise music is indeed, as he claims, more in the tradition of Henry Cowell (that exquisite early modernist miniature painter) than the New York school of minimalism and its descendants. A totally charming record of very absorbing and listenable musical studies.

New Zealand droner supremo Peter Wright tells us that An Angel Fell Where The Kestrels Hover (SPEKK KK022), a sky-gazing prediction which reached us in December. Recorded ‘live to disc’ in London during 2007, Wright’s heavily processed and sumptuous guitar effusions pour into your lap like a bucket of golden syrup enriched with lysergic drugs. The primary influences on this work includes Wright’s particular location, the changing effects of the weather, and his own emotional reactions to these things. To put it another way, any old biddy can stand in line at a bus stop in Tooting Bec and complain about the awful rain we’ve been having lately, but it takes a musician like Wright to sublimate the experience and turn it into music.

Marc Arsenault and Joshua Baker come to improvised guitar music from a background in avant-rock bands, and now call themselves Nickname: Rebel and Offset Needle Radius respectively. On Nickname: Rebel Vs Offset Needle Radius (WOW COOL 24/005), they turn in some very credible meandering guitar-scaping episodes full of vast abstractions and intricate scrapey doodles, largely avoiding unpleasant noise or feedback in favour of continuous, real-time playing, only slightly enhanced with foreign-sounding effects and treatments. Intriguing material on offer, but I keep listening out for the moments when the duo cease to tread around each other like two cautious cats, and start to cut loose with some of the impolite energy that you might have hoped for from their punk rock backgrounds.

Terra Incognita is the duo of Charles Butler throwing out hot licks a-plenty from his banjo and dobro in time to toned-down trip-hop beats supplied by Adam Cremona. It’s kind of interesting that the duo are based in Nashville, and I wonder how this slightly unusual take on traditional American musics goes down among listeners in the heartland of the country and western music industry. A nice enough record, but I cannot share the press release’s view that this EP represents ‘groundbreaking folktronica’. Butler, skilled as he is, exhibits little interest in exploring the limits of folk forms, improvisation and the very sound of the banjo in the same way as Uncle Woody Sullender, who is to my mind a far more radical and inventive player. From November 2009.

The American warrior Daniel Menche has, for the time being at least, moved away from the extreme drum-based records which have been arriving here in recent years. His Kataract (EDITIONS MEGO DeMEGO 008) struck me as a real return to the form of music he does best of all, i.e. wild and blistering heat-death noise. I was astonished to find that this powerful assault was derived primarily from field recordings of waterfalls in the pacific Northwest of the US. But then again that isn’t really so surprising, given the unstoppable power of this most overwhelming of nature’s manifestations; a water cannon aimed directly at your face would do less damage than one of these aquatic piledrivers. Keen readers and listeners will remember that Russel Haswell has recently paid homage to the power of England’s waterfalls on his Wild Tracks CD for the same label (noted here). Some fine illustrations by Emily Hyde adorn this, another essential Mego monster.