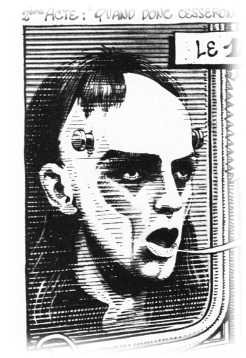 Last Saturday I gave another spin to some of my favourite sections of Foxtrot (CAS 1058) by Genesis, and ‘Get ‘Em Out by Friday’ has stuck with me for days ever since. I like the way the music is filled with all the things the enemies of prog-rock love to hate: sudden changes in mood, time signature, tone and attack. The unpredictable dynamics and expressive emotions (minor key chords suggest the mood is sinister, melancholy, then completely intolerable) all tend to convey the sense of a situation that’s getting out of control – which is perfect for the subtext of the song’s story, where human greed is getting out of control. In Gabriel’s observation on social injustice, defenceless tenants are evicted in the name of corporate profit-making, and move from one unbearable scenario to another. Eventually all mankind is doomed to a dystopian future where our very bodies have to undergo physical change in the service of making yet more profits.

The song is also of course notorious as an example of the eccentric music-theatre of Genesis, with Gabriel acting out the voices and emotions of all the characters, and working to a libretto that’s complete with stage directions, character names and narrative scene-changer cards (none of which are sung in the lyrics). It’s a three-act play compressed into 8 minutes.

In 1976 the French bande desineé artist Jean Solé delivered a highly dramatic rendering of Gabriel’s skills, dubbing him ‘the Fregoli of rock’ in the process. I found my copy of Fluide Glacial No 8 (the magazine he co-founded) which contains the story, and present a scanned copy here for your interest. The strip starts off with a dead-on rendering of the band and their logo, then launches into a bizarre and excessive flight of fantasy in which Gabriel performs his changes with the help of masks, costumes, wigs, false breasts, and assorted lumps of inflatable rubber. For added comedic effect, he’s required to make these lighting-changes while he’s actually singing the song; as he gets more agitated, things go spectacularly wrong and he ends up with mismatched body parts, false noses, teeth, spectacles and props flying everywhere.

It’s the last two pages where Solé switches tone, and with some relish provides us with very visual depictions of the consequences of enacting the restriction on humanoid height, as decreed by “Genetic Control”. Crude surgery is performed by militaristic robots on the sullen and resigned populace, who submit to this grisly fate on an assembly line. It’s like a downbeat, x-rated version of the body-part shape-shifting comedy we’ve seen enacted in the first two pages of the story. Solé is embroidering considerably on this part of the song, finding a degree of violence and dehumanisation which Gabriel may not have intended. French 1970s comics did, I think, sometimes subscribe to a Marxist philosophy which could probably be traced back to the roots of Situationism. The creators have subtitled this story to ask the direct question “when will the housing scandals end?” and the appreciative audience at the end make comparisons to Beckett, Ionesco and Kafka -all masters of absurd drama and fiction.

I’m also quite taken with the translation (by A. Dister) of Gabriel’s lyric into French. “They say it’s all right” becomes “Ils affirment que c’est normal”, which is arguably a much more precise rendering of the meaning of the lyric. It also draws attention to the underlying message of this song, which presents us with a series of increasingly brutal, life-changing events, all in the name of making money for John Pebble enterprises – only to be told ‘c’est normal’ at every turn. The slimy character of The Winkler is the one telling us it’s all right, trying to normalise the eviction and rent-raising, telling us it’s in ‘the interest of humanity’. What a fitting depiction of the ravages of monopoly capitalism, and one we can all recognise today when we get the same response from spin-doctors, politicians and advertisers if we ask questions about genetically-modified crops, third-world labour to produce sneakers, or the real costs of cheap petrol. In short, we’re all Mrs Barrows! Capitalism gets its way because we’re told there’s no other way of running the world. “Ils affirment que c’est normal.”