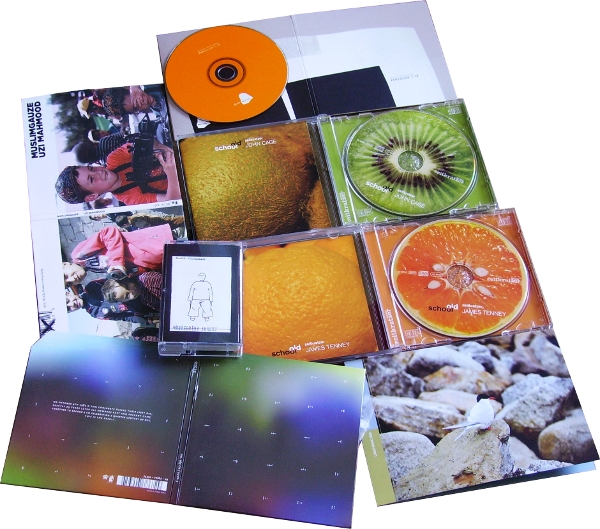 Marginal UK electro-loner Hari Hardman has opted for the cassette format for Chairantus Roseus (HH021), the 21st release on his own Hari Hardman Produkts label. A C10 tape (five minutes per side) must be the shortest length of oxide you can get before you start producing an endless home-made tape loop. Almost unvarying analogue electronic monotony (one high tone, one low tone) can adorn your living space if you seek out this “musick inspired by the beauty of endemic Tibetan flowers”, as the creator perceives it. Not even La Monte Young could compact this much minimalism into such a brief statement.

Got a couple of smartly-packaged niftoons from the highly-esteemed Soleilmoon label of Portland. A double-disc set is dedicated to the famed but largely low-profile English industrial band O Yuki Conjugate, who debuted in 1982 and are still regarded as a going concern. OYC 25 (SOL 167 CD) is not a compilation of their former glories, but a reunion album featuring all the original members, who met up and did it in a London studio in 2007. Slow and solemn ambient-drifting material, propped up by a partly-concealed rhythm which is too shy or secretive to show its true face, leaks off the record like blue ink poured onto a polythene sheet. All in all, rather too shapeless and uneventful for my tastes, but I’d be foolish to deny the obvious artistic commitment that lurks behind each ponderous emanation, and the professional studio sheen that garlands this very atmospheric sound-world is something that most record producers would sell their own eyebrows to attain. It’s also much more listenable than the ultra-smooth releases that we tend to hear from Chris Carter of late. The luxury gatefold pack is like a mini-LP with high gloss paper, and includes a short factual essay on the band’s achievements. There’s also a DVD of live recordings, not seen at time of writing.

From same label, we have Uzi Mahmood (SOL 161 CD) by Muslimgauze, which reissues the four tracks from a 1998 twelve-inch EP of this name, along with just about all the other associated recordings made at the time by Bryn Jones in response to Soleilmoon’s commission for a DJ-friendly nightclub record. Such was Jones’ generous creative profligacy at this time that it has required a double-CD set to contain all these recordings in one place.

Another example of a record which sounds nice but doesn’t seem to make a great deal of sense is Parcelles 1-10 (BRUIT CLAIR RECORDS BC01), a solo turn by Mathias Delplanque. On it, Mathias plays various stringed instruments and percussion, doing it all live in the studio with no overdubs, and amazing the listener with his lush, hyper-real sounds. His microphone placement and imaginative but sparing use of studio enhancement are just perfect; if only it wasn’t such a frustrating listen. The phrases gradually pile up, but refuse to cohere into a musical statement or sentence that might make itself understood.

From Budapest, another small-run release on the 3LEAVES label. Lasse-Marc Riek documents the outdoor nature and wildlife of Finland on Habitats (3L002), paying particular attention to wind, weather, water and birdsong. (Dozens of bird calls are catalogued on the cover). His concise and modest sleeve note reveals how his work his given him a deep understanding of the interconnectedness of forest life, and he advises us to listen to the “vast array of bird voices, as well as the silence one can detect in between all of these different sound sources.” A beautiful and serene record.

Reinhold Friedl’s great Zeitkratzer project continues unabated, with two simultaneous full-length releases under a new rubric which they call [old school]. This sees them getting back to their more traditional avant-garde roots (if that’s not a contradiction in terms), by playing the music of James Tenney and John Cage. The Ensemble have been playing Tenney for over ten years now, and James Tenney (ZKR 0010) contains a new recording of 1988’s ‘Critical Band’, and the debut recording of the 1976 composition ‘Harmonium #2’. These recordings reveal something of Tenney’s penchant for ‘pure tunings’, and are both such immaculate performances that it gives the impression Zeitkratzer have turned themselves into a machine, whose cogs and gears are made of glass crystal. Not a single one of these long tones is fluffed, faltered or mismanaged in these demanding, high-concentration pieces. It’s not just the cover image that makes me think of concentrated orange juice. This music is like a massive dose of Vitamin C!

In my less charitable moments, I find my gorge rising against John Cage with a vengeance. I’ve rarely found a recording of his compositions that didn’t strike me as mannered, boring, and excessively quiet; and, although it’s not his fault entirely, I think his ideas (or others’ misunderstandings of them) have caused a tremendous amount of damage and have not always shaped modernism for the better. However, it could be that Zeitkratzer’s John Cage (ZKR 0009) is going to refresh some of my thinking. We hear the same precision in execution as on the Tenney above, yet it seems there is also a conscious effort by the ensemble to strip out all the conceptualism and high-minded ambitions, and concentrate solely on playing the music. The performance of ‘Four6‘ (from 1992) is a particular triumph; grand, stately and unhurried, it’s music played by musicians who are already so familiar with the complex languages of modernism that they’re using them to construct complex and nuanced prose, displaying a capability for long essays, novels and poems. Will report back if further listenings dispel this impression, but today this spin makes me want to dust down that copy of Etudes Australes for Piano and see if I can finally find what I’ve been missing.