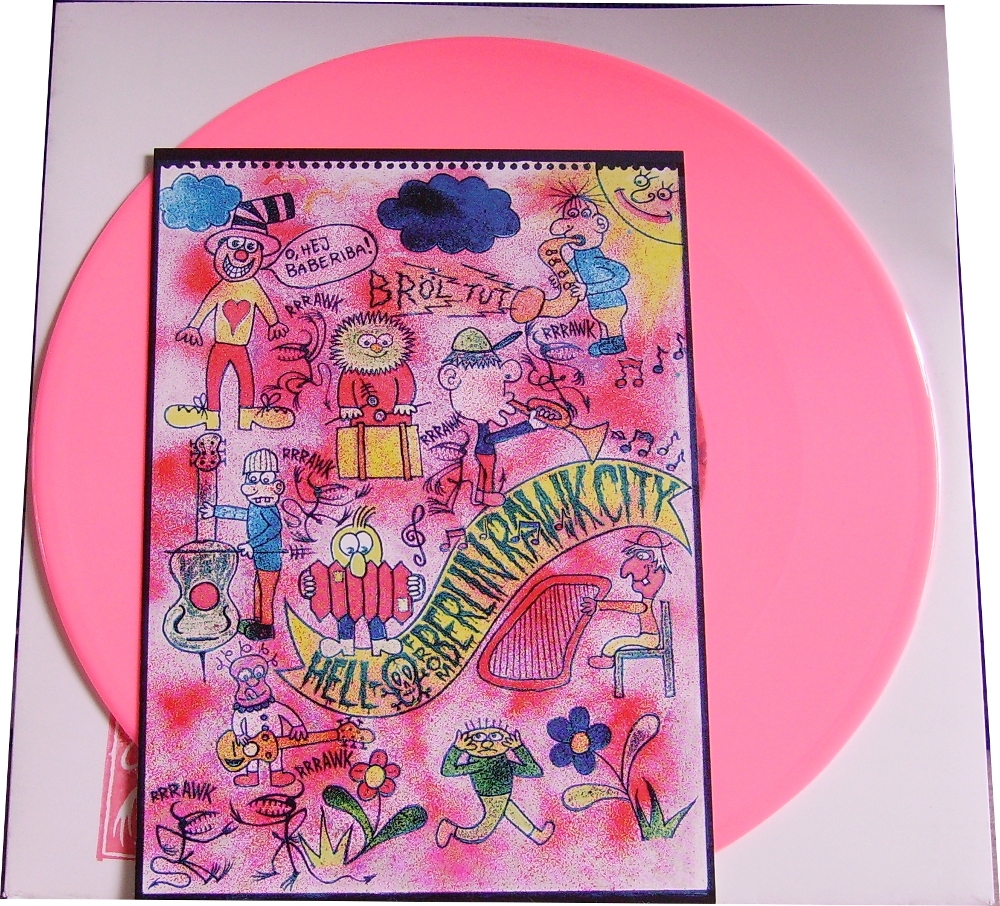 Herewith some very fine Vinyl Vemporisers which have, like Mercury sailing on horseback, lately winged their wonderful way into the safe confines of the Sound Projector pallisade. Only a gallery of full-size colour photos can do justice to these sumptuous visual packages.

Sudden Infant is something of a godlike figure in the free-noise inner circle, but outside of hearing one excellent CD I haven’t fully appreciated his longevity nor the extent of his productive output, to say nothing of the high esteem in which he’s held by fellow nihilistic crack-a-mole noise freeholders. My educational deficiency is about to be corrected, as I slowly plough my stylus through eight sides of sizzling darkitude as served up from My Life’s A Gunshot: Retrospective 1989-2009 (HRONIR 8909).Only a few samples and snippets have been poured into my ears so far, but it’s obvious to anyone that Joke Lanz is clearly fully-armed with distinctive and strong ideas on these 49 rare and unreleased cuts. Dynamic electronic crackle, full-volume surges of energy, visceral vocal gruntalising, extreme takes on avant-punk rock, wild sampling and tape loops – these are just some of the techniques used by Sudden Infant to unleash nine types of very peculiar mind-shifting, surrealistic Hell on the planet. For those whose tastes run to the furthest edges of the bizarre, this compilation is essential listening. It’s not just a basketload of savage and severe racket (although there’s probably a good portion of that), but a very twisted alienating and unsettling listening, with plenty of unexplained gaps and musical brain-bafflers. 500 copy limited edition with smeary mask paintings by the artist on both those gatefold double LPs; with no CD edition in the pipeline, this release represents your only shot at nabbing a generous hunk of classic all-out weirdness. As Ron Lessard declares, “We’re all amateurs when he hits the stage”.

The great Terry Fox has established himself as an imaginative and highly unorthodox modernist composer, whose Christo-like ideas are often ambitious and grand-scaled, truly thinking outside the box when it comes to realising a composition. The Labyrinth Scored for 11 Different Cats (CHOOSE RECORDS NO NUMBER) is no exception. Partly inspired by his obsession with the Labyrinth of Chartres, whose architectural structure was translated by Fox into a number systems which he used as the basis for many works. In 1977 he wanted to make a tape composition but was not satisfied with using conventional musical instruments to do it; a visit to a neighbour somehow inspired him to record the purring of cats. Not content with overdubbing the sound of a single moggie, he advertised his requirements in a San Francisco newspaper and ended up visiting the houses of volunteer pet owners, to get the type of cats (loud and constant purrers) that he needed for the composition. The meticulous work pays off in dividends, as you’ll find when you spin this vinyl issue which is a shortened version of the work made in 2003 in a Cologne studio. Open up the gatefold to reveal a photo of the semi-graphic score, rendered on conventional music staves with strange notations. It’s a gentle yet powerful reverberating masterpiece, and totally sympathetic to the inner vibrations of this most noble of animals. It’s very impressive to me and not insignificant that he learned the cats’ names, and includes the names in the notes. The only comparable work I can think of is when Annea Lockwood made her ‘Tiger Balm’ work which utilised the breathing and growly purrs of a tiger. 11 Different Cats – is that anything like two separate gorillas?

Some numerical structuring has been used on Matt Rösner‘s Repeat (MIATERA 2009-002) LP, but that’s just the half of it. This Australian composer has made a superlative minimal release based on his observations of the environment of his home continent, using voices and instruments and some additional tones contributed by Adam Trainer, Greg Taw, and Alexander Wendt – who released the UK edition of this item on his 12X50 Recordings imprint. The side-long ‘Lattices’ displays the most concern with mathematical procedures for composition, being based on the so-called Fibonacci series. Very far from being just another boring piece of droney ambient electronica, Repeat is a solid and demanding listen; every sound on it feels refined, purified, and distilled like mountain water. 500 copies of this item; I have in my hands a copy of the luxury hand-numbered white vinyl edition on the Miatera label, which comes with an art print and an original drawing inserted. The Anne Berndt photo on the cover is so perfectly composed it’s good enough to be a still from an alternative version of Michael Snow’s Wavelength. A genuine art item.

In stark contrast to Rösner’s near-silence and hushed calm, we have a blistering seven-inch from two diabolists of noise. Evil Moisture and Government Alpha have made this split release (‘Plosive Sanctuary’ / ‘School of Meat Cutting’) for Le Petit Mignon, who amazed us last year with an equally gorgeous split package by Chessex and Riviere. It’s an essential haft of acidic blastage, to be sure, but you mostly need to buy it for the elaborate and gorgeous package; the fold-out cover is a double-sided silkscreen with astonishing artwork and lettering by crippaXXXalmqvist (who also did the labels) and Anna Lili Konishchev. Every cliché of goth-art and 1980s graphzine monstrosity (skulls, devils, chains, eyeliner makeup, wild hair) is overturned and revitalised when put through the creative mincing machine by their unhinged drawing pens. As a final delightful touch, the item is pressed on pink vinyl, and there’s a rusty safety pin inserted in the cover. Act fast if y’wanna nab one of 300 copies of this sweetie!