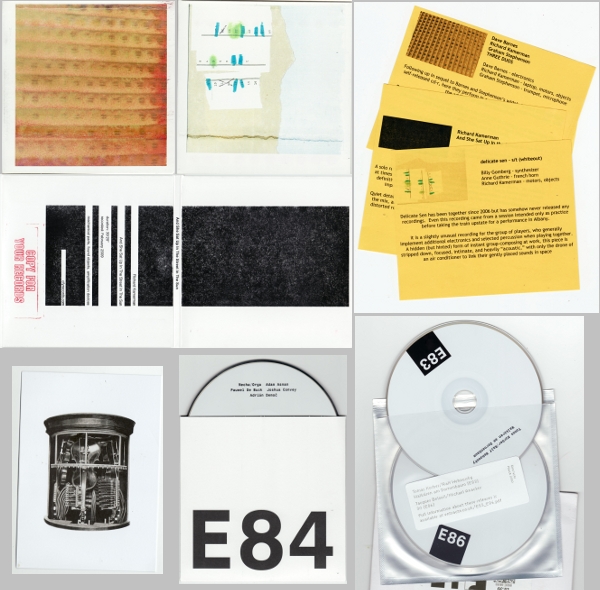 From New York, Richard Kamerman sent a few samples from a small press CDR label called Copy For Your Records, which appears to specialise in various manifestations of minimal and quiet improvised music. Kamerman appears on all these items, as it happens – playing motors and objects as part of Delicate Sen, along with Billy Gomberg on the synth and Anne Guthrie on the French horn, playing some highly restrained and delicate work inside a room where the air conditioner threatens to dominate the proceedings. That’s how quiet they are, folks…I kind of like hearing this to compare it with some of the Onkyo music I’ve heard from the Japanese schools, and while these New Yorkers may appear to lack the stern-faced rigid discipline we’ve come to expect from the orientals, they do come across as somewhat more willing to explore and experiment. The title of this release is represented by a streak of Tipp-Ex or white-out fluid brushed by hand onto the spine and back cover. I thought this was to cover up an error, but it’s deliberate – that’s the title!

The Three Duos release partners up Kamerman with Dave Barnes and Graham Stephenson in assorted combinations, where they give each other the time and space to extemporise in highly abstracted ways with their electronics, laptops, trumpet and microphone – and the amplified objects and motors once again. This particular release nudges me one step closer to getting a handle on the defining aesthetic of this label. One prominent feature is the determination to make musical instruments (and all objects, by extension) sound completely unfamiliar. Yet nothing alienating about the strange sounds that rattle and slide buzzingly forth from the surface of this record; on the contrary, it feels more like we’re being re-introduced to the way things naturally sound in real life. Not since The Shadow Ring opted to use mic-ed up ashtrays as percussion instruments have I met with such unaffected simplicity and directness.

And She Sat Up in the Street in the Sun is Kamerman’s solo release, put together using a Dada-esque array of mechanical parts and found objects, electronically amplified in intimate ways. This extremely enigmatic 39-minute piece was recorded in a single take, slightly edited, and framed to allow the inclusion of certain imperfections that resulted from the misbehaviour of his equipments and his computer. It would not be overstating the case to say that this is a record of very extreme dynamics, with most of its “unapologetically unpleasant” stretches of mechanical near-noise lurking in wait at the end. Yet Kamerman doesn’t strike me as one of those nihilistic noise-blasting types, and in spite of the apparent initial “blankness” to this record I am persuaded that he has made a very “personal” record, as he claims. As to what the twists and turns of that personality may be, I leave the curious listener to discover for themselves.

The very wonderful Allon Kaye has been showering me with numerous releases on his distinctive and austere art label, Entr’acte. I have been remiss in not noting them all, but by way of making up here are a couple of items which landed in my metallic breadbasket on 3rd March this year. E84 is a compilation of extreme and underground electro-acoustic music from Mecha/Orga, Adam Asnan, Pauwel De Buck, Joshua Convey and Adrián Demo?. Convey and Mecha/Orga offer the two most striking pieces to these ears, the first a relentless and slightly threatening airless drone noise, the second a set of tape pieces and electronic hummings that collide in many curious ways. The Demo? piece is in fact a work of modernist classical composition (using singers and chamber instruments) which is less immediately appealing, but on the whole this disc seems to offer a lighter variant of the sort of heavyweight viral oozings we’ve been enduring on the Zelphabet series from G X Juppiter-Larsen.

E83 and E86 have been bundled together in the same heat-sealed envelope, once again bearing the stark typography and minimal design that is a huge part of Entr’acte’s label identity. Walküren Am Dornenbaum is a brilliant collection of tapework composition and electronic noise from Tomas Korber and Ralf Wehowsky, and indeed could prove to be one of the more exciting projects I’ve heard associated with Ralf in some time. Emerging from a three-year working period which began in 2006, this work represents a compression and intensification of studio sessions, field recordings and mutual software manipulation, to create these six works of great clarity, purpose and import.

The title 30 is another collaborative work, between Jacques Beloeil and Michael Anacker. Taken from a live performance in December 2008 in Gent, this is a fascinating 30-minute excursion which takes us deep into the wastelands and marshes of the human brain. It’s a series of episodes (some treated field recordings, barely recognisable) combined with ominous low-key electronic music, often propelled by a devilishly slow pulsebeat. When a robotic voice tonelessly utters a number at strategic intervals (we appear to be counting down from 30 to zero), you’ll be stopped dead in your tracks like a deer trapped in the headlights. A real chiller…in its understated way, this icy piece feels almost pathological in its determined attempts to undermine our shared sense of reality.