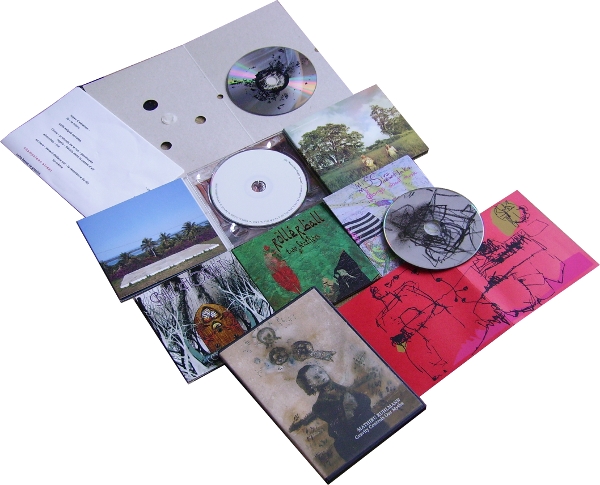 Ashley Paul draws fascinating skeletal atonal squeals and clanking from her unique custom green-box string set-up on To Much Togethers (REL RECORDS REL015), also ensuring that percussion, woodwinds, reeds and voice are brought into play. When Finnish musicians like Uton overdub themselves, a swampy morass of sound sometimes results (not that there’s anything wrong with that). But Ashley’s sound remains stark and crisp, each plucked string and clattering strike standing out as strongly as a winter twig against a clear January sky, as she works slowly and conscientiously. Her mother Gayle Paul provided suitably spiky drawings for the silk-screened package of this miniature gem of free noise. Sent from Providence RI: I think we’ve also heard Eli Keszler’s solo guitar release on this label.

Gilles Aubry provides claustrophobic urban field recordings brought back from certain enclosed spaces, showcasing them on Les Écoutis Le Caire (GRUENREKORDER GRUEN 061) over two lengthy suites of edited material. Amongst these intensive and crowded rumblings, the sense of despair is only barely kept at arm’s length, and even hardened city dwellers such as myself blanch at the harsh realities with which this French Swiss audio composer confronts us. A counterpoint of sorts is provided by the words of Stéphane Montavon, printed in harsh red and black typography on a paper which had been folded up and inserted into the release as a ‘word map’. How Situationist! Although it’s not explicitly mentioned in the press notes, I expect this entire package, with its blind-letterpress card cover and circular holes cut in the back for purposes of revealing key words in the word-map, is intended to be used on your next psychogeographical stroll (or dérive) around the city.

Operating in a vaguely similar vein is Music For Empty Spaces (BASKARU karu:18) by @c, the duo of sound artists Pedro Tudela and Miguel Carvalhais. This is an album of field recordings collaged together from their overseas travels, slightly modified; the intention seems to be to ask questions about our perception and memory of sounds. Their written ideas about this project are a bit insubstantial and vague, but the CD is often very dense and involving; I like it when field recordings are layered to create “impossible” worlds that we could never hear in real life.

Ethan Rose holds a small place in my affections for the charming record he made of reprocessed Wurlitzer organ music (for me, it summoned nostalgia for a 1920s skating-rink holiday I never even experienced). For Bridge Carols (BASKARU karu:17), he teams up with fellow Portland dweller Laura Gibson to create another moving and beautiful record of dreamy ambient music. Gibson adds extra layers of meaning by collaging in spoken-word extracts from her diaries and notebooks, sometimes allowing her voice to be heavily treated to give that ‘soft focus’ effect and creating something as musty as an old wooden caravan. I prefer it when they steer clear of attempted melodies, because at such moments Gibson starts to resemble a more cloying and mannered version of the awful Joanna Newsom, but for the most part this is a successful experiment, creating a species of “aural scrapbook” out of very personal fragments of text and memory.

Gravity Controls Our Myths (SEMPER FLORENS sf03) is the latest in a series of enigmatic metaphysical utterances from the subdued and mystical electro-acoustic composer Mathieu Ruhlmann. His transformation of sound sources is extensive, masking and concealing all behind layers of intrigue, occasionally allowing blurred fragments of the familiar to leak through the cold sonic mist. His titles are littered with clues; colours, weather, stones, keys, gateways, insects and bird life; and the cover hints at the mystical vision of a saint who may be seeing the face of Jesus in the sky as she prays. Ruhlmann is like a more abstracted and opaque version of Joe Frawley, in that he assembles his materials with the same consummate care, but plays down and muffles the narrative aspects of his sound-stories. And like Frawley, his music is also filled with beauty and wistful longing for unattainable things.

Got a package of items from North Pole Records in Portland (Oregon). High-quality art music from Bill Horist on Covalent Lodge (NPR17), a collection of nine intricate instrumental pieces showcasing his assured and elaborate guitar work, but also featuring excellent contributions from numerous North American musical polymaths, among them the great Eyvind Kang and Climax Golden Twins. Tremendous weight and conviction in every note here, and you never get the sense the players are trying to overwhelm you with their sheer skill or bravado. The orchestrated layers of this album will repay numerous listenings over the years, while continuing to stir your inner melancholy demons with its lingering air of mystified sadness. No less accomplished is the supreme musicianship of Rollerball, represented on Two Feathers (NPR16) (a CD and DVD package). Their slightly-avant brand of jazz funk freely laced with many queasy electronic blorts and studio treatments produces a rich stew and has much to recommend it, but I found the mannered singing voice and syrupy sax work heavy going after a while. Also out: Songs About Music (NPR19), a collection of intellectual avant-rock songs by Miss Massive Snowflake, notable for the elaborate lyrics of Shane de Leon.