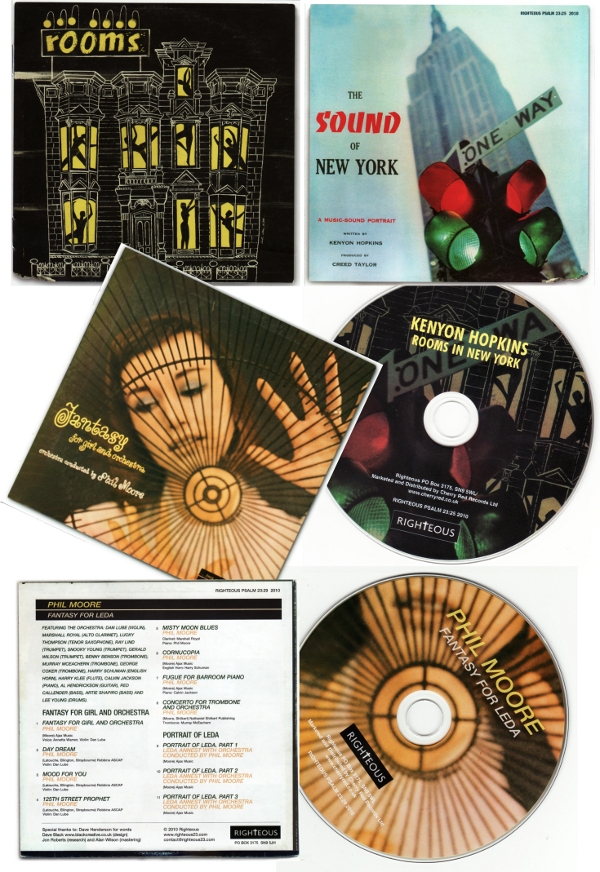 Two more fine reissues from the UK’s Righteous label. From TV and movie soundtrack composer Kenyon Hopkins, we have Rooms in New York (PSALM 23:25), a compilation of two jazz suites from the late 1950s. Rooms (from 1959) was issued with the nifty illustration on the cover not unlike the famed West Side Story graphics, but its intention is something darker than that mainstream movie; Hopkins intended these ten short pieces to convey the isolation, paranoia and neurosis of life inside a NY tenement block. This is reflected in titles such as ‘Desire’, ‘Panic’, ‘Daydream’ and ‘Alone’, and of course in the vaguely uneasy music with its mixed chords, uncertain tones and muffled, introspective sound. A very composed record, it’s not one to recommend to listeners who require a large dose of fiery improvisation in their jazz intake, but for contemplating your own four walls on a grey Sunday afternoon it’s just perfect. Interestingly, Teo Macero (famed as producer of electric-period Miles records) is showcased on tenor sax and a mournful clarinet.

The Sound of New York (from 1958) completes the CD. Far livelier and more explicitly narrative in intent than Rooms, this one clearly shows Hopkins’ intent to “capture an experience on vinyl” and uses sound effects, songs, acting voices, and background noise to limn a sound portrait (a picture-postcard) of a day in the “Big Apple”. Natch, this record takes in many of the obvious hot-spots like any good rubbernecking tourist would, including Coney Island, Broadway and Chinatown, and the emphasis is placed on modes of travel (plane, taxi, subway, and a memorable traffic jam moment complete with car horns, whistles and sirens), but it adds up to an irresistible easy-listening jazz platter that’s like a mini-movie soundtrack full of forward movement, bustle and eye-popping excitement. The Creed Taylor production is a further cast-iron guarantee of aural satisfaction. Have played this one quite a lot since it arrived a few weeks ago and what impresses me is how infectious it is, in spite of the fact that it borders on the trite, corny even; this could be one example of kitsch that has aged well and mellowed like fine brandy.

The Phil Moore CD Fantasy For Leda (PSALM 23:29) likewise bundles two short LPs together (they made ’em taut and compact in them days!), Fantasy For Girl and Orchestra and Portrait of Leda, again both from the late 1950s. Moore was another commercial composer from the worlds of radio and TV, here making a couple of lush orchestrated instrumental LPs which the compilers describe as “psychomatic probes” and suggest that for the time and context in which they were created were almost “experimental” in intent. The second suite should appeal to Yma Sumac fans, showcasing the eerie vocal acrobatics of Leda Annest over three slow, long and darkish dramatic orchestral backdrops. This singer wrenches out operatic high-notes as though she had a gun to her temple, and at times transforms herself into a human musical saw. The glossy studio production adds a layer of lurid varnish that makes this an unforgettable listen.

Fantasy is mostly a collection of short jazz instrumentals (including three Duke Ellington numbers) scored in such pleasurable ways as to appeal directly to the “squares” in 1950s record-purchasing America (I suspect it’s unlikely that these all-American records traveled to the UK or elsewhere). But the opening title track is remarkable, an eleven-minute composition that features the voice of Annette Warren acting out the confused and random thoughts of a jilted wife/girlfriend. Hearing her echo-enhanced voice over these musical statements is like hearing an extended TV commercial for a 1950s painkiller drug. The musical changes are intended to reflect “what’s really going on in her heart”, and Moore’s orchestra switches tempos and themes on a dime, in sympathy with the poor girl’s moodswings. Again, although it’s about as kitsch as a tinted postcard, this surprised me by how genuinely affecting it is. You start to feel sorry for her. At the end of this piece of saccharine melancholia, you’ll end up wanting to phone up the imaginary girl herself to ask her if she’s busy tonight, then burst into tears when you find her phone number isn’t printed on the back cover!