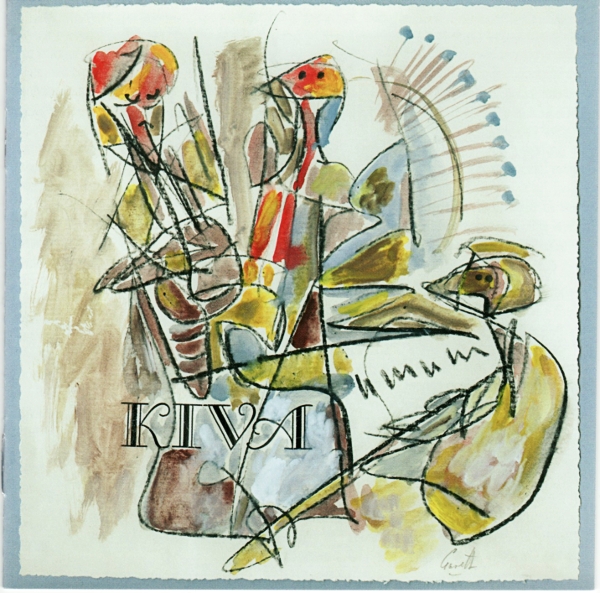 KIVA (POGUS 21054-2) is a double CD set of fairly uncompromising modernistic music…only those of a strong heart and intestinal fortitude should check in to experience these four lengthy pieces of atonal disjointedness. The avant-garde combo KIVA was set up in 1975 in California led by the American trombonist John Silber and Jean-Charles François, a percussionist from France. Their mission: to widen up the artistic field of play in classical music so as to allow the performer more creative licence and freedom in their interpretation, yet without treading over the same ground followed by those of the jazz-based improvising persuasion. Two recordings from 1991 on the first disc (the group lives and dies by its recorded statements) are all acoustic (piano, percussion, brass, strings) and sound to these non-musicological ears like a dark and demented form of avant-chamber music that would cause even Pierre Boulez to start frothing through his hairband as he frantically tried to regain control from behind the conductor’s podium. However, some listeners might find more accessible inroads on the second disc; it kicks off with a 1985 piece where the acoustic instruments are cut with some growling live electronics (Keith Humble roars out nicely with his DX7 set to Prowling Tiger mode), and at certain points the combo’s disjunctive and stuttering approach to sonic generation starts to turn into a profound musical language. To some extent, it’s the way they leave these stark and yawping gaps in their playing that makes it so exciting. The disc concludes with a 1990s tape collage made by John Silber, using KIWA performances as his raw material, and these ‘Poems on the Absurd’ are where it really starts to get unnatural, futuristic and deeply spooky. At this point the intrepid listener will want to revisit disc one and start to decode these difficult, dense and challenging musical statements in more detail. Real food for the brain, this one.

Another extreme-experimental belter of the week comes from the GD Stereo label run in New York by the fabulous and celebrated Geoff Dugan. Con Gen Duets / Gen Con Duets (GD022) displays a collection of works made by old friends and sparring partners Gen Ken Montgomery and Conrad Schnitzler, who have been producing crazed hand-made tape experiments and other aural delights since the 1980s, based on a mutual admiration system and determination to push each other’s working methods in strange, new directions. On this, we’ve got seven examples of challenging, radical music-making made simply by combining the basic one-finger spontaneous piano compositions of Schnitzler (a man who doesn’t “really” play the piano at all and in fact has made numerous records trying to deconstruct and undermine this most academic of orchestral instruments with almost as much clinical passion as the insane Walter Marchetti) with the every-day and uneventful field recordings of Gen Ken, who delights in the poetry of small objects and overlooked bric-a-brac. I realise this is a record that will try the patience of many, but those of you with a taste for absurd drama of the Beckett and Ionesco variety will find yourselves whistling all the merry tunes from these duets in no time. The release is housed in a letterpress envelope filled with letterpress artworks, made by our good friend with the hardest working elbows in the print room, Ben Owen of windsmeasurerecordings. A fine limited edition art object of 300 copies it be. Also I see from the press release that the GD Stereo catalogue is going to be made available through the Pogus website from now on. Nice to see these big guys of the NYC avant-garde co-operating with each other to mutual benefit.

Speaking of Gen Ken, he recently sent us a cassette tape from Poland made with Mark Moreland and Paul Hamilton. On Elm Elm Elm (XVP67), Gen and Mark make quiet and eerie sounds using everyday objects like musical instruments, and vice versa; Paul Hamilton apparently only appears by accident as a guest voice, and is also responsible for animal sounds. Recorded last summer, it has the feel of a spontaneous semi-musical event taking place in the open air under warm skies. I think you would be impressed by the range and variety of sounds and effects going on in this apparently unobtrusive and gentle work; it’s packed with life and rich events, all leaking in through the wide-angle lens of the microphone. 50 copies only, packaged with inserts (including one laminated object, natch).