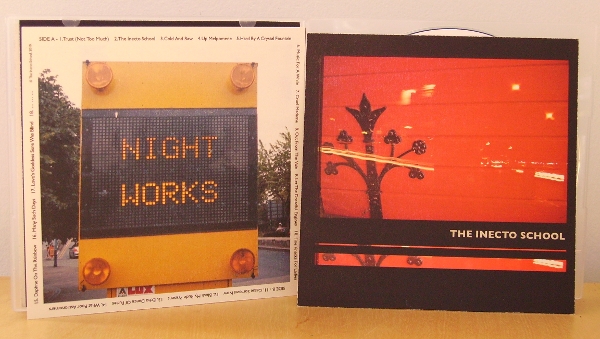 Installation Recordings (1973-2008) (PD 26) is a superb collection of the gallery sound-art installations of Max Eastley out now on Paradigm Discs, and all credit to the label for producing such a high-quality collection of this somewhat neglected UK artist. Over two discs, we hear just a man can do with blocks of wood, strings, steel plates and a very organised and imaginative approach to making sound art. Eastley uses natural forces (the air, the wind, sunlight, gravity) to power his devices, causing complex sound fields to emerge from the most minimal of constructions and with very little intervention from human elements. As such he belongs squarely alongside the great Hugh Davies, another English sound art pioneer who believed in economy and small intimate sounds produced from the most unlikely sources. Surveying 25 years of sound, this is a fascinating and astonishing collection of richness and variety (in its understated way), with all instances faithfully documented and, for the most part, recorded by the artist himself. The booklet is packed with colour photographs, and aside from that, very little explanation as to the construction or context of the pieces, in keeping perhaps with the modest proportions of the set. If there was an American equivalent of Max Eastley, a set like this would have been issued as two jumbo-packed 5 LP boxes, packed with self-indulgent wodges of grandiose texts and analysis. But in England, we care more because we’re smaller.

Left Cincinnatti (JOE FRAWLEY MUSIC JFM-CD08) is the new release from Joe Frawley, the Connecticut pianist and sound-collagist. Continuing preoccupations manifested most strongly on his last release Emperor Of Daffodils, this release is full of voices, taken from a variety of sources – cut-up voices, prepared texts read by actresses, sounds sourced from YouTube and dialect recordings, and so forth. Along with the shimmering and stirring electronic music, tape workings and nostalgic piano work, Frawley once again tells stories, building his fragmented and overlaid narratives out of fleeting moments, impressions and traces. For what it’s worth, I seem to hear at least one narrative thread on here that is full of the sadness of a wasted life, thwarted ambitions and the tedium of a compromised job. The career girl who didn’t like high school ends up working as a secretary in a soulless bureaucratic establishment, where the very ring of a telephone strikes a chord of existential despair. As is customary, all of this is woven together with Frawley’s characteristic dream-like and ambiguous soft-focus manner, leaving a very open-ended yet incredibly dense text for the listener to revisit. Despair and loneliness are kept at arm’s length via rich and beautiful art.

Got a couple of new releases from the micro-label Anti-Guru Recordings in London. Nils Rostad is one performer whose name is new to me, but he seems to be one of the string-playing and mysterious drone-merchants from Norway, and his Self-Portrait as a Budeie (ANTI-GURU 003) is one of the more charmingly confusing and eccentric outings I’ve heard in this vein. His acoustic guitar work is a bit conventional, but what he does with chanting voices and wonky synth playing is guaranteed to provide your daily dose of excited puzzlement. I particularly enjoy the absurd and unpredictable noises he makes on the long 18 minute track at the end, which seems to be pointless acoustic string-scraping for the first half, then spastic heavy metal noise for the second. 50 copies only.

From same label, the slightly more well-known Norwegian Finn Keijo with So Cold Blues (ANTI-GURU 004). On this Keijo (with some percussion assist from Aaarni Virtanen) delivers his take on acoustic and country blues records, doing so with a decidedly lop-sided approach to instrumentation, balance, rhythm and all the conventional elements of music-making. Using this meandering and curious process, at his best he will arrive at something unmistakably original and decidedly odd, and only occasionally lapsing into Rolling Stones-like clichés in his vocalising. May be a little too “formless” for some ears, but I suspect this one will be a grower.

For another approach to contemporary acoustic guitar music and song, the listener is advised to point their listening-nose in the direction of Tea & Toast Band, the UK underground combo who positively ooze quirkiness from every fluffy pore of their green-coloured pelts. On Swarf (NO LABEL CDR), you’ll find seven songs made from bedroom-minimal instrumentation to produce stark and skeletal backdrops for the deadpan singing of Robert Bidder, who sings and intones his semi-nonsensical poetry in an unadorned fashion, while the spirits of Edward Lear and Lewis Carroll look on with warm approval. He also provides the striking coloured pencil-drawing artworks. Fans of the early Kevin Ayers LPs will also find much that strikes a chord with their inner buttered crumpet. Apparently, this limited CDR is the last we will hear from Tea & Toast Band, but let’s hope Bidder continues to engage in his highly personal musical and artistic projects.

Miraculously, here’s another record from The Inecto School, a combo of UK players who I regard with almost as much awe and amazement as Unseen, and who to date have sent me two other very limited press CDRs. On Night Works (NO LABEL CDR), recorded in Leeds, the low-profile team are identified only by their first names, and we have no idea who plays what – but there’s plenty of horns, piano, percussion, guitar, voices in the service of primitive rhythms and general musical oddness produced with untutored enthusiasm and a very clear sense of intent. 18 bizarre musical episodes (some of them quite short, almost unfinished) whose titles I’ve only managed to find by pulling the cover inserts out completely. This is probably not something to play to fans of “real” improv produced by skilled jazz musicians with chops – instead, The Inecto School are more like The 49 Americans and other proponents of a very singular and endearing form of music we might as well call “acoustic punk rock”. No other country besides the UK, as far as I know, has managed to generate such a peculiar strain of home-grown music within the confines of this island ever since the post-punk years. Very good to know a strand of oppositional practice still exists somewhere, in a largely conformist country dominated by car insurance adverts, meal deals, and Starbucks with wifi. No idea how you can find a copy of this beautiful oddity, but you need one. Try emailing gillmorton [at] yahoo.co.uk.