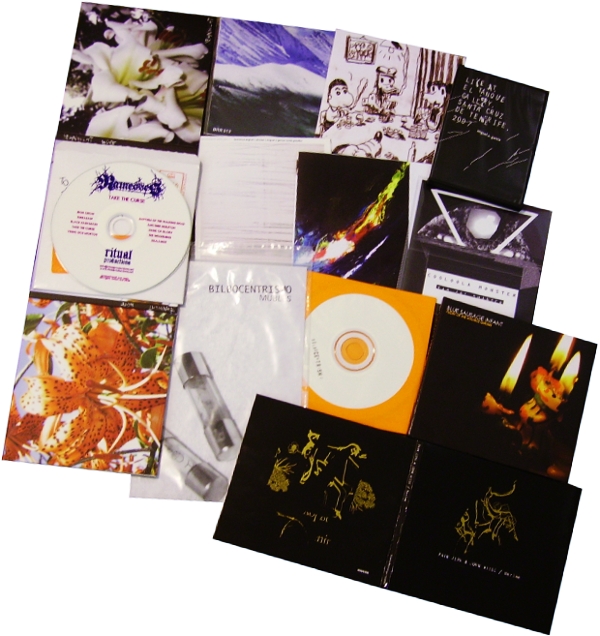 Bumper package of materials from Miguel A. García in Spain, who impressed us last ish with his “stern and severe” approach to very minimal electronic noise on Armiarmak. In this generous bundle a number of his collaborative projects and solo endeavours are represented; I made a beeline for the long package with a picture of two fuses on the cover, which contains two tracks of perplexing improvised fumbling from Bilbocentrismo, reckoned to be “the strangest band in Bilbao”. Their open-ended non-musical clatterings on Mubles (HAMAIKA 13) will be fascinating listening for those with a taste for the ramshackle and rambling. García is also a member of Cooloola Monster, whose Tam O’ Shanter (AMBOLTHURE RECORDS AMBOLT-76) release is equally bewildering – like hearing a very dramatic soundtrack to an obscure foreign science-fiction movie. Their brand of loopy noise is far more eventful than Bilbocentrismo, packed with funny electronic broinks and sampled elements. Big Fork (AMOR/DISCOS 003) is also very good, whereon García appears under his xedh guise alongside noish, and together they stew up four gorgeous tracks of edgy, fizzy, electronic mashed turnip paste, with plenty of mesmerising power leaking out through the wodges of dense sparking-plugging mayhem. Also in the pack, not yet heard: Taruho (LE BRUTAL RECORDS BRR016), a six-piece which also features Michel Henritzi; Variations In White Part 1 (WHITE LINE EDITIONS), a conceptual-looking collab with Lawrence English and Andy Graydon (of Winds Measure fame); Etrangler L’Etranger (LE BRUTAL RECORDS BRR 013), and a solo live disc Live at El Tanque Gallery (RONF RECORDS RNF-033). All of these look very inviting, I must admit. Some of them are available as downloads and many of them are avowedly anti-copyright, in the same vein (though perhaps slightly less strident) as our good friend the libertarian Mattin.

Last heard from Chester Hawkins as Blue Sausage Infant in January this year, with a powerful drone record that hypnotised its unsuspecting audience in evil ways. Flight Of The Solstice Queens (ZEROMOON ZERO010) is quite another affair, eight tracks of very varied music spanning such genres as black, bad-acid fuelled psychedelic rock to powerful and intense episodes of cold, semi-ambient industrialoid nightmare-scapes. Hawkins also exhibits a penchant for warped and weird humour, with his forays into cut-up and sampling that tend to reduce everything to an absurd, pointless joke. Pleased to see Jeff (Violet) Surak is on this record, along with other commando-teamsters Michal Shanahan, Jason Mullinax and Gary Rouzer. This fine release is further evidence of the artiste’s conviction and assurance, proceeding with confidence down those foreboding corridors of strangeness which usually remain closed to most of us.

Further sleepless-night inducing music from the Cold Spring label, with the new release by Sehnsucht which is a side project by Manic from Mayhem, featuring the bassist Vivian Slaughter, Ingvar Magnusson and Andrew Liles. Those hoping for some form of ultimate Black Metal statement will find however that Wüste (COLD SPRING RECORDS CSR142CD) lies squarely in the cross-fertilised genre labeled here as “noise-darkwave-ambient”. I was expecting cold and drifty electronics, but voices are to the forefront; the record is full of deeply unpleasant voices reciting, singing and making dark utterances in unknown tongues, and everything has been treated with studio processing to produce results that (while still recognisable as human) are as unnatural as possible. The instrumental backdrops, while accomplished, seem to be mere adjuncts to these vocal abominations. The writings of David Tibet and Michael Cashmore have also been used in this project, and the luxury gatefold digipack is covered with many pungent examples of Les Fleurs Du Mal. Sick shit!

My Monday evening takes an even more insufferable turn as I face three relentless bursts of noise-monstrousness from Pain Jerk and John Wiese. Nerima (ANOEMA nocd060) is three short tracks of electronic devastation from a recent collaboration in Tokyo, and it’s been released by Markus Metsälä in Helsinki. Unlike so many of these projects, Nerima actually resulted from working in real time in a studio, and not from the duo sending each other sound-files via Rapidshare. Another superlative example of brutal, punishing grit-filled grislitude, hot as superheated black tar and as thick as concrete on the planet Pluto.

Since today’s post has taken such a Saturnine turn, we could do worse than finish with Take The Curse (RITUAL PRODUCTIONS RITE001) from Ramesses. I have the feeling I should have heard of this English black-doomoid combo (who come from Dorset, of all places – such a serene part of the country to be breeding such hideous noise!). Actually, despite using that notorious Nazi Death Camp cover art from the Enfants Terribles of Brit-Art Jake and Dinos Chapman, and its track titles exhibiting the usual unhealthy preoccupations with skeletons, death, crows, and satanism, the record turns out to be a very entertaining and tolerable blast of competent heavy rock, with many melodic and psychedelic elements to temper the abiding sense of monotony and misery. Fans of the genre will however find plenty of the characteristic growled grating vox, diabolical basses, smashed drumming and low-frequency malarkey to satisfy their ignoble lusts. First release on this new label and will emerge as a limited edition double LP, if not already out.