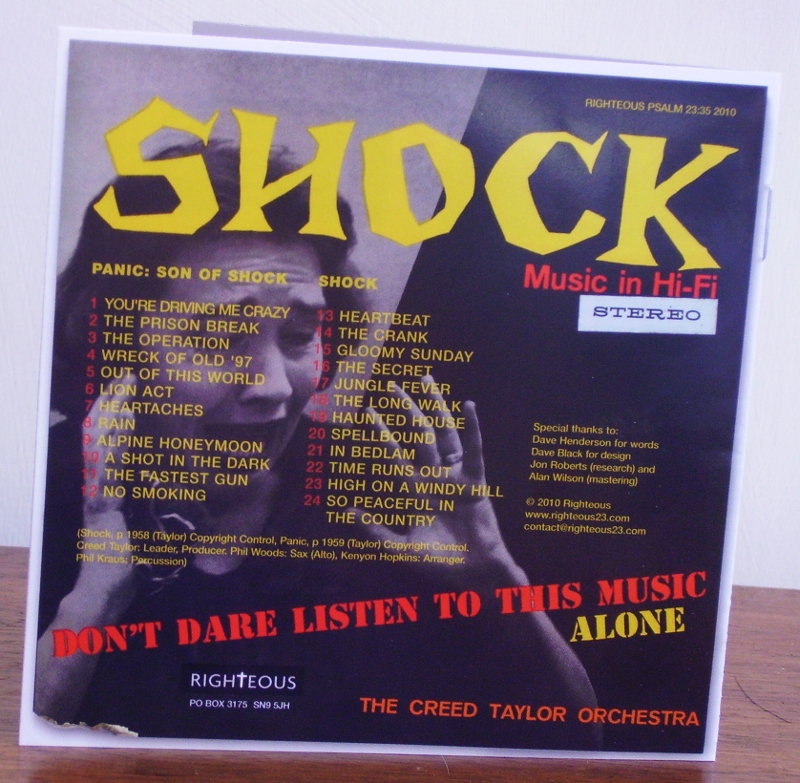 Gotta admit I’m developing a real soft spot for these groovy reissues of heavy jazz kitsch from the Righteous label. The latest emergence is Shock and Panic (RIGHTEOUS PSALM 23:35) by The Creed Taylor Orchestra, a CD which bundles together Shock Music in Hi-Fi with its successor album, Panic: The Son of Shock. With the printed health warning and vaguely disquieting cover photos of alarmed and abducted women, these late 1950s easy-jazz workouts may put one in mind of a William Castle schlock-fest such as The Tingler, but once spun they of course turn out to be quite mild and even vaguely hilarious. The ‘shock’ elements are completely tongue-in-cheek, each track presenting a different limp scenario narrated by Hollywood actors and actresses, and the corny attempts at humour in these goofy shaggy-dog stories have not dated well. Then there’s the outrageous sound effects, which contrive to turn each track into an episode from some melodramatic radio serial. No matter, as the overall combined effect of these voices and FX with the smooth, lush musical arrangements is just dead-on, providing the sort of eyebrow-twisting listening experience that soon persuade you why these “long-lost deleted gems” are so sought after by collectors. There’s a long list of reasons why Creed Taylor is a hero of modern jazz (starting with the CTI label and including Lalo Schifrin), but this oddity reveals another side of his unusual talents.

I wonder what a creator like Creed Taylor would make of People Like Us, the English cut-up creatrice who has just released Music For The Fire (ILLEGAL ART IA121) with her American counterpart Wobbly. The duo are collaborators of long-standing, and this fine item is the result of many years of effort. I’d like to think PLU has original vinyl copies of Shock Music and Panic in her extensive collection of wild and woolly easy-listening records (I seem to recall that she doesn’t actually have to collect anything any more; people just send her things). Like all her work, this “collection of warm and mellow mood melodies” is dark and subversive, cruelly parodying the innocent world of the 1950s and laying bare the hypocrisies of bourgeois society with fiendish glee. Wobbly adds his own touches of sneering nastiness to the surreal proceedings, and we admire the dizzying the ingenuity with which they combine radio and TV voices with fragmented, interrupted moments of the cheesiest, toe-curling musical honey-drippings you could imagine. To listen is like eating strawberry Jello laced with cyanide.

No sarcasm of any sort on Reflex (UTECH RECORDS URCD045), the new sombre and sober solo album from Switzerland’s RM74, a gifted studio technician whose ingenious layering of dense and droney overdubs has caused many a livid night of consternation in these four walls. Keyboards, electronics, synths, percussion and piano are used with ingenuity and imagination to create distinctive buckets of creaky, torpid atmosphere, and unlike the lightweight stylings of Shock Music in Hi-Fi, this material is filled with genuinely disturbing undercurrents. The presence of a bat on the cover reassures you that you’re in a safe pair of claws; the whole package could easily pass as an alternative soundtrack to Werner Herzog’s Nosferatu The Vampyre.

Equally lush in the aural area is the latest offering from Hearts Of Palm, Cincinnati’s best-kept secret of the US underground. Earth Headed Heart (FOR NOISES SAKE FNS 017) can sometimes give you so much substance and density to listen to that you think your ears are about to have a heart attack, swimming in golden lard and diamond-encrusted starch. For this single 31-minute stretch of bleakened diabolry and mystery sporting-events, the Palmsters are joined by C. Spencer Yeh, that superb violinist and noise-monger from Burning Star Core who has yet (in my view) to put a single foot wrong as he paws his way through the hinterlands. Where previous HOP releases have apparently comprised edits from longer performances, this time out we get the whole thing served up in one hefty man-sized dose, a wodge of such unknown quantity that ingesting it in one sitting could prove fatal. “We wanted to try something a bit more natural this time out,” blithely states one band member in the attached letter. Natural? If they call this natural, I’d certainly hate to go on a ramble in the Blackhand Gorge State Nature Preserve with these guys! At 75 copies, this is another limited-edition gem of completely twisted, kraut-psych noisy unholiness that wipes the floor with most competitors who aspire to lick salt from the same rocks…no website for this, mail enquiries to heartsofpalm@earthlink.net.