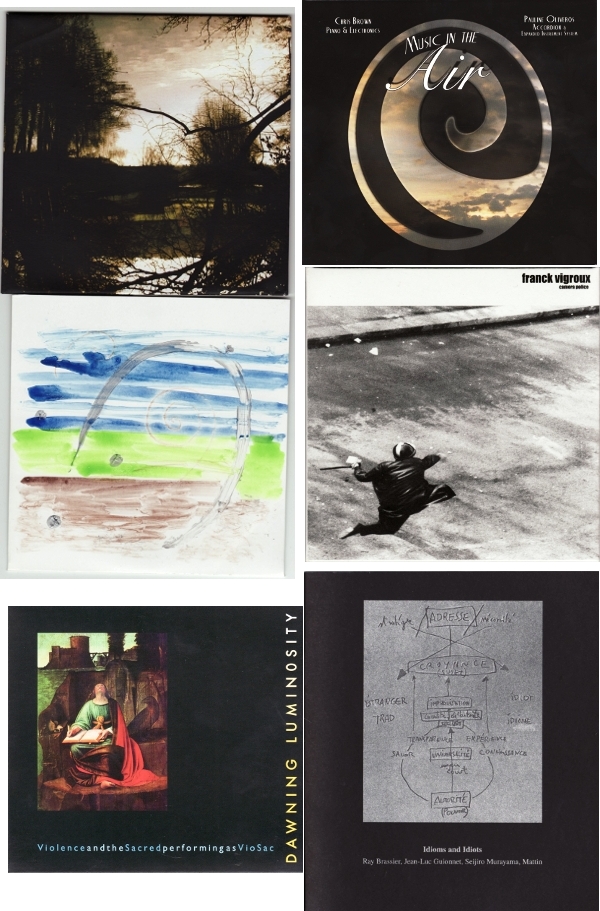 From Denmark, Stormhat sends a copy of From The Moat (APPOLLOLAAN RECORDINGS APAR030), a curious solo CDR which has been made from building up layers of field recordings with “primitive instruments”, and producing some very singular sound events through subtle, organic collisions. Sun, sand, sea and windspray are not exactly prominent on these hallucinatory episodes, but they seem to underpin and inform all the strange clonkings, clankings, wooden thuddings and deft tape manipulations that are taking place. I’m always impressed when a creator can master this many layers of unmatched materials, and not end up with a paintbox full of muddy brown goo (or the digital equivalent thereof), a success that our man Peter Bach Nicolaisen achieves here in his quiet and idiosyncratic way. ‘Taking Off On Fragile Wings’ is especially impressive for producing the sort of imaginative and fanciful materials which many stern academics of the tape-recorder method would normally deny themselves. A micro edition of 50 copies, with photography and artwork by Michael Shaw; I wonder if he hand-decorated all the covers? Apparently it’s already sold out!

Canadian project VioSac were last noted here in August 2009 with a rather apocalyptic and bleak pronouncement somewhat in the “dark ambient” mode, but Dawning Luminosity (VATS3) feels quite different. It’s calmer, slower, and extremely minimal, made using a lot of analogue equipment at source (including a Moog Voyager and a Roland Korg), and it aims to express “sadness and resolution”. I haven’t yet got to the resolution part, but it’s certainly quite a poignant listen thus far. I am personally encouraged to see a 16th-century religious painting on the front cover (St John on the isle of Patmos painted by Bramantino), hinting that Graham Stewart may also wish to convey something of the quietness and solitude of the ascetic life, and his printed motto “understand, and you are liberated” comes within a hair of “the truth shall make you free” (John 8:32). These filtered and looped electronic droney-waves are not unpleasant, and there’s a steady rising and falling slow rhythm shaping the work.

Camera Police (D’AUTRES CORDES RECORDS DAC302) is another great one from Franck Vigroux, the French one-man jazz-rock electronic genius. As you can tell from the title and the cover art which features a single riot policeman with helmet and baton inflated in Photoshop so he looks like a grotesque leaping blimp, this concept CD is highlighting the dangers of the surveillance technology which is one of the blights of the modern age, and Vigroux makes no bones about his very real fears that we’ll all end up under the iron rule of a Police state if things go much further. Track titles take up the theme, alluding to identity cards, truncheons and databases of personal records on ‘Fichier’. One of his more exciting and abrasive records results, with plenty of harsh electronic noises and mutant beats thickening up the textures of these paranoid atmospheres, ultra-fast instrumentals and chattering side-swipes. Musically, Vigroux is proudly carrying on the traditions of Pinhas, Lard Free and Metal Boys, and it’s also great to hear the Situationist spirit of rebellion and political critique expressed with such passion and panache. Garde à vue, gare à toi!

On Music In The Air (DEEP LISTENING DL 43 2010), we have a studio collaboration between famed American Minimalist Pauline Oliveros, with her accordion and her conch, and also performing on something called an “expanded instrument system”. Hard by is Chris Brown, a scholarly fellow who has followed many ethnic influences in his piano work but also busied himself with building modified electronic instruments, a path which has led him to the real-time signal processing he performs here with the aid of computers. While ‘Troposphere’ seems a little over-crowded with discordant and busy sounds competing for air-space, the opening cut ‘Noctilucent Clouds’ is bafflingly beautiful, somehow deflecting all of one’s expectations as we try to listen our way into its nebulous centre. The genius of the performers here seems to be that they have created a gaseous fog out of multiple small gestures and tiny mosaic-like sounds. Very compelling.

Idioms and Idiots (W.M.O/R 35) is the latest item sent to me by Mattin, an event which you should all by know is the equivalent of receiving a bottle of nitro in the mail. I’m not sure yet but it might be another ingenious anti-music statement that manages to be totally innovative and poisonously destructive at the same time. Hereon, Roy Brassier, Jean-Luc Guionnet, Seijiro Murayama and Mattin are doing something which human minds cannot comprehend. It seems to have been recorded live at a festival in Niort in 2008, perhaps working to diagrams (or perhaps not) by Guionnet, and it’s bolstered by a textual mini-essay inside the package which I think explains something of how it came to be. I can’t face digesting that mass of words at the moment, but there seems to be a set of very convincing ideas about keeping normal expectations and conditioned behaviours at bay, in the same radical way that MEV used to do when they were inventing their unique form of improvised noise (ideas and discussions…always a good approach). At least, that’s my understanding of the heading for paragraph 2 “Don’t start improvising for God’s sake”, which in my opinion is very good advice indeed. This is without doubt one of the most perplexing and confusing records I have heard this year, which can only be a good thing; packed with strange sawing noises, inept guitar strums, inexplicable passages of nothing happening, and odd irruptions of screaming metallic shrieks. I hope to revisit in due course and try and figure out what this all means.