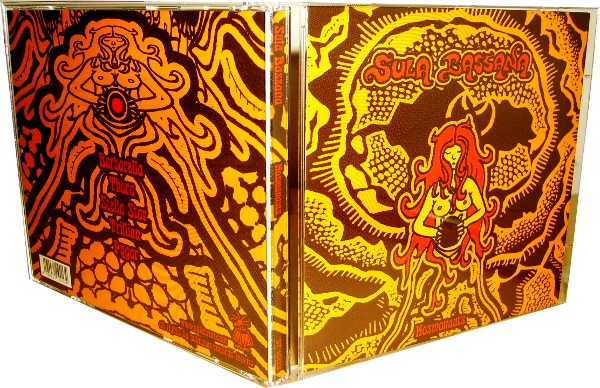 From Seattle, Wind Swept Planes offer Spirit Man, an entire double-CD set of “experimental psychedelic” music on Debacle Records (DBL 031). This semi-acoustic sprawl is entirely the work of Chad Allen, who is either very gifted at making seamless overdubs or is capable of playing several instruments at once, or both. Percussion, stringed instruments, and low-key noise eruptions are mingled with chanted and hummed vocals whose every phrase is packed with exquisite, unintelligble gibberish; Allen strives hard to project the image of studied lunacy and the private worlds of other artists which inspire him. To his credit, the real-time performed nature of his work is effective; phrases are mumbled and passages are broken, and the music doesn’t appear to settle down into a comfortable droning zone very often, and many of his sounds deliver the requisite helping of unfamiliarity. Great poetic titles and symbolist collages too.

Djam Karet are a five-piece Californian rock band who have been working since 1984, and a lot of their professionalism is evident on The Heavy Soul Sessions (H C PRODUCTIONS HC015) which is packed with long proggy instrumentals, and a tip of the hat to their mentors King Crimson by way of a cover version of a composition by Richard Pinhas (who also worships Fripp). Not especially “out” music, this is nonetheless recommended for anyone who enjoys massed guitars, organ, synth and dynamic drumming styles played with assurance and conviction, even if the band can occasionally slip into “power ballad” mode and get a little too tasteful for these ears. The long sustained guitar tones of the lead players, probably helped by their use of e-bows, is one of their trademarks of quality. Front cover collage uses the same perspective photo of a building four times over, to strong effect; it reminds me of how Hipgnosis assembled the Quatermass album cover for Harvest.

Swedish neopsych combo Hills on the other hand are creating gloriously retro psychedelic / krautrock styled music and making absolutely no bones about it. Their self-titled CD (ST 1002) comes from the groovy Sulatron Records label in Austria, the home of such fine releases as Krautrock From Hell by Electric Orange. (Come to that, why are so many of their album covers predominantly orange in colour?) Among their other considerable exploits, Hills manage a spot-on pastiche of early Kraftwerk and Neu! on ‘You Talk The Talk!’, but they also turn in first-class cosmic guitar noodling on ‘Rainship (Solregn)’, and ‘Messias’ uses so much sun-drenched phasing effect on all the instruments that you expect the band to emerge from the studio transformed into crystalline beings. Plus, they have a rhythm section that you could use as the foundation when you build your new house. If you already own everything released on Brain, Ohr, Virgin and Polydor between 1970 and 1973 and you want more like-minded material to fry up your synapses, this is the one for you. The website describes it as ‘CD-version des absolut großartigen debüt-Albums der Schwedischen neo-Kraut-Space-Psychedelicrockband!’, and I’m not going to argue with that.

On same label, Sula Bassana with their Kosmonauts (ST 1003), another cosmo-noodler which pays tribute to groovy sci-fi sexfest movie Barbarella with its opening cut, and proceeds to lay out four further lengthy cuts of very convincing sunshiney electronic acid music, rendered with synths, drum machines and sequencers. Irresistibly poppy-minimalo antics enhanced with many fine filter variation techniques, this is grabby and lively stuff that resides quite some way from the more arty and occasionally cold inner-space voyages of Tangerine Dream. Note red-headed Space Maiden on front cover perhaps deriving some sensual happiness from the “Pleasure Orb” she clasps. One to play when you’re reading that second-hand copy of Chariots of the Gods nabbed from your local Oxfam…