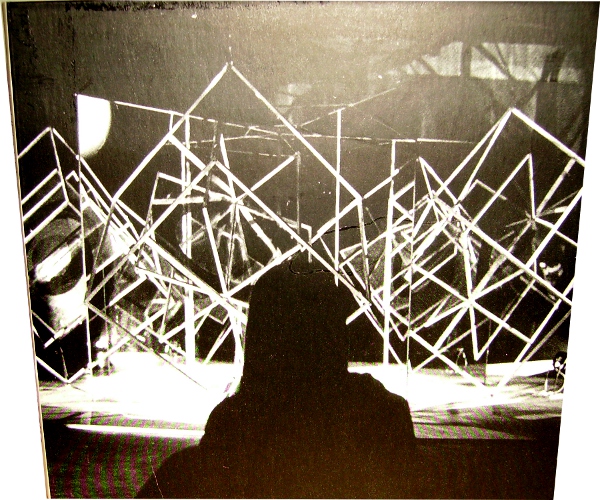 Early Electronic Works (PRISMA CD708) is a collection of compositions made by the Norwegian 20th century composer, Sigurd Berge. The label Prisma Records found these tapes in 2009, cached in the Henie Onstad Art Centre music archives (which is the HQ of the Norwegian Studio for Electronic Music, where Berge realised many of these pieces). I’m just about able to say I have a passing familiarity with the work of his contemporary Arne Nordheim thanks to a Rune Grammofon CD from 1998, but Berge is entirely new to me. It is quite minimal music to say the very least, very simple and making spare use of electronic systems; in fact, unlike some from the American school who get obsessed with repeating loops and complex patch pin set-ups, Berge seems to bypass the systems altogether and unleash the sounds directly from his brain. There is something deeply intuitive at work here. ‘Ritual’ and ‘Eg Beisla Min Støvel’ are almost like insane, minimal versions of hymn tunes played on an organ from another planet, but ‘Preludium’ is pristine in its icy desolation, fraught with dissonant roars from faraway polar bears. ‘Sørgemusikk’ also oozes visions of whited-out landscapes populated only by tiny microbes or arctic mosquitoes. I’ve yet to delve to the bottom of this frozen cylinder, but I await with eager anticipation the 31-minute piece at the end, which comprises excerpts from a longer work ‘Blikk’, one which appears to have been part of a collaborative commission. To me a composer is worth pure gold when he follows his heart and makes the music that he wants to, and that’s the vibe that spins off these reels for me. From the late 1960s and early 1970s. Lasse Marhaug did the cover design for this great collection.

Also got to thank the Prisma Records label for issuing Elektrofoni (PRISMA CD711), a 3 CD set of the guitar music of Bjørn Fongaard. Come to think of it, Lasse Marhaug played a large part in rescuing this music too. Seems he heard a Fongaard recording of ‘Galaxe’ on a rare LP and was so impressed by its “contemporary” feel (despite the fact it was recorded in 1973) that he wrote an enthused article about it online, soon after which the musician’s daughter got in touch with him. Turns out she’s carefully preserved all of her father’s tapes, scores, photos and other material with the diligence of an archivist, and this series of events led to the preparation of the box set we now have in our hands. It’s going to take a few listens for me to fully explore these ‘micro-tonal’ works made from 1965 to 1978, which were scored and performed by Fongaard using a customised electric guitar. Everything feels as deep as a well, a well of ice. All I know so far is that this eerie music is every bit as emptied-out and beautifully desolate as the Berge recordings above, exhibiting the sort of grace and delicacy that you wouldn’t have thought possible to extract from this instrument. He plays with butterflies for fingers, as though the ghost of his own breath were playing the strings. Though quiet and unobtrusive, it’s still intense and sturdy as a wire cable, supporting metal cannisters at a camp in Antartica. Three discs include ‘Sinfonia Microtonalis’, ‘Elektofonia’, ‘Space Concerto’ and numerous shorter works, plus there’s a DVD of his radio and television appearances, and a detailed printed booklet with essays, photographs, graphic scores, and news cuttings. If I’m reading this right, it’s the first ever release for many of these haunting outer-space pieces. Enchanted listeners are already throwing around the ‘cosmic’ superlatives, and the label proudly regards Fongaard “as a forefather of Norwegian electronic, experimental and improvised music.” Truly astonishing stuff!