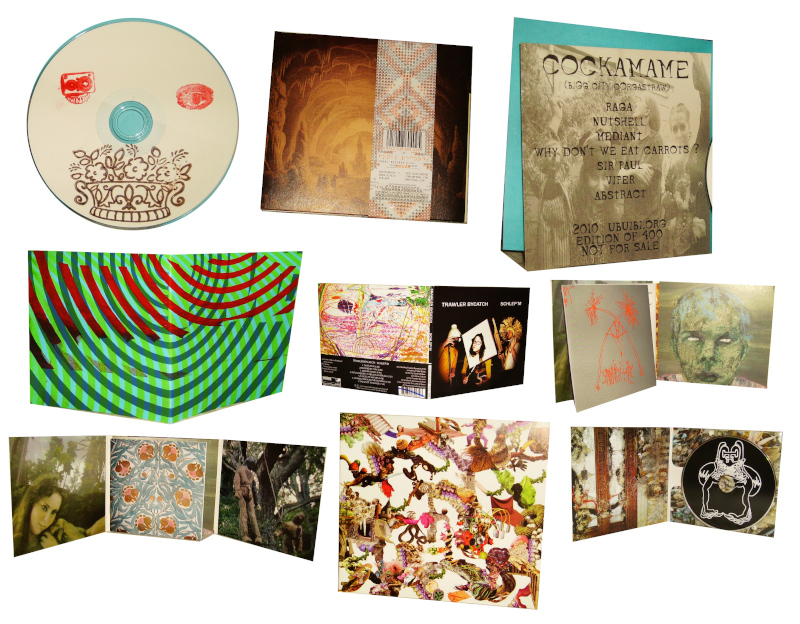 Fine album by Trawler Bycatch, a rubberised trio of greasy hotheads from Portland Oregon. Schlep’m (PORTER RECORDS PRCD-4050) exhibits the outlandish guitar-bass-drum chops of these freakster humps in ways we haven’t heard since the glory days of Sun City Girls and their early LPs on Abduction. What I like is the way they’re not trying too self-consciously hard to impress us with their weirder-than-thou credentials (despite what the front cover looks like!), for example by opting for a “strange” or whimsical recording sound, a tactic which has been the downfall of many lightweights in recent years. Self-recorded, the instrumental playing and singing on this record is solid, and th’album has a strong and “natural” rock sound that wouldn’t feel out of place if you filed it alongside your Husker Du or Minutemen LPs. (Me, I’d love to hear them take on some Allman Brothers numbers.) They’re also fans of Italian prog rock, which earns the band extra chocolate points with me; no doubt this accounts for their apparent fascination with complex and ever-changing time signatures, something their drummer handles with well-oiled ease.

Now here’s the latest from the visionary kings of the Finnish avant-rock scene, Kemialliset Ystävät – Ullakkopalo (FONAL RECORDS FR-69) was released in August 2010 and is available as an LP or this triple gatefold digipack CD with a lovely fat booklet of photos and texts inserted. The core team are joined by some international stars for this outing, including C. Spencer Yeh, Neil Campbell and Hitoshi Kojo. As ever, the band walk a knife-edge between free-form chaos and tightly-compressed pop song, and to my mind present one of the most convincing updates on psychedelic music that’s ever been committed to a recording medium. Music full of wild dynamics, bizarre sounds, unpredictable twists and turns, delirious layers of cross-cutting effects, and a curious mix of whimsy and deathly seriousness underpinning all. No wonder it took them three years to complete…14 tracks of child-like, dreamy magic, largely delivered by acoustic instruments and in a decidedly non-aggressive manner – an essential listen. Very sorry we didn’t get around to noting this other-worldly gem a lot sooner.

A truly tasty item from the lunatic fringe is Cockamame (UBUIBI NO NUMBER), sent to us one fine day in November 2010 from Almeda in California, representing the work of the Bigg City Oorgastraw on a limited CDR of 400 copies. Various colourful characters with imaginary names (also hopefully long hair, headscarves and buggy eyes) are credited with guitars, keyboards, vocals and electronics; I see that merry prankster Wobbly (frequent collaborator with People Like Us) is involved too, which may give you some idea of the loopy panoramas on which these sheckle-footed loobies have ranged their shotguns. What may also surprise you is what a gentle listen it is at first hearing, mostly acoustic and quiet percussive and droney instrumentation (nice to hear the under-used harmonium on record), played with lots of gaps and unexpected silences, all wafting in as if surrounded by a tropical night-time breeze. However, the demented chantings and free-form spoken ravings of the vocalists will soon get under your skin like a glass of OJ spiked with pixie dust, and then you’ll suddenly be caught off-guard by an inexpressibly beautiful passage of brief music which drops in from nowhere. I suppose that fans of “out rock” probably won’t find much to wet their beaks here, although there’s some stoned percussion on their tribute to the early Faust on ‘Why Don’t We Eat Carrots?’ which is truly memorable, and there are two long and electronic-heavy pieces ‘Viper’ and ‘Abstract’ which close the album and will genuinely raise your spine hackles in ways that a thousand and one wannabe Suicide / TG imitators can only dream about. Perplexing and mind-sapping oddmenteria at its most gloopy.