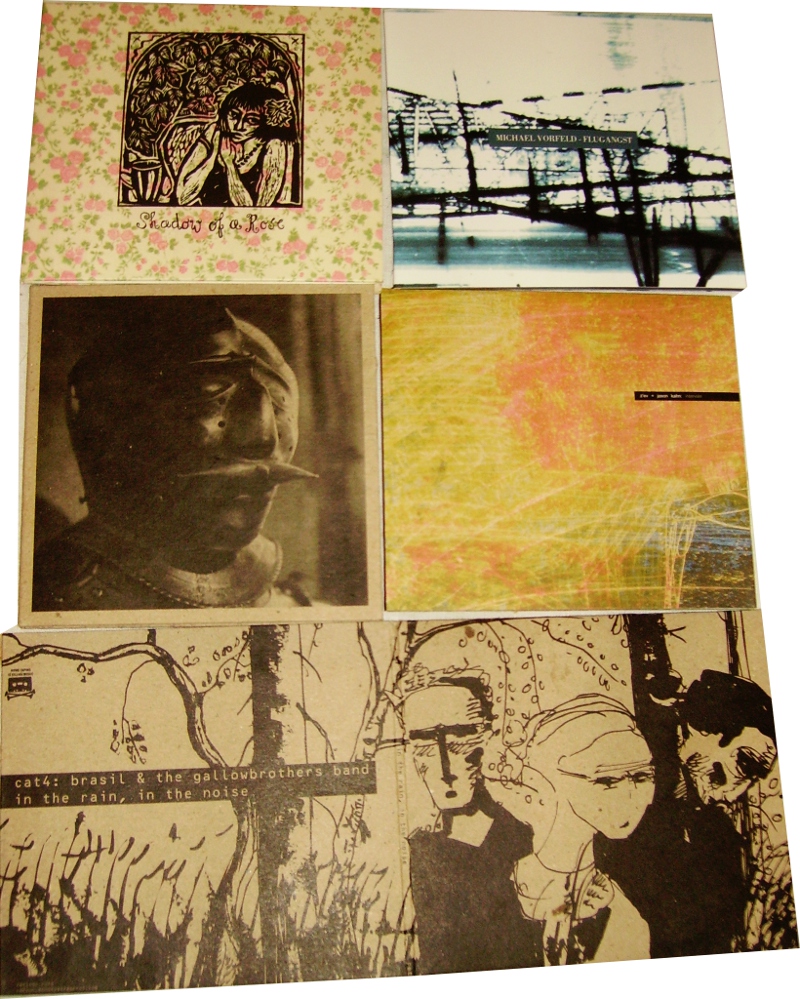 Five items from the Polish record label MonotypeRec., which arrived on 12 October 2010 in the TSP wicker basket. Three examples of art music, and two examples of post-rock modernism on their new sub-label, Cat Sun.

Brasil And The Gallowbrothers Band have I think come our way before with their 2004 CD for Last Visible Dog, but failed to dent my cranial listening buds with much that was memorable outside of an unusual instrumental line-up. In The Rain, In The Noise (CAT SUN CAT4) isn’t about to convert me into their number one fan, but I note the instrumentation has now slimmed down considerably and makes good combinatory use of acoustic guitars and flutes with the electronic elements, which include a Yamaha CS5 and samplers. Pale and washed-out vistas of slow and penetrating dismality are occasionally punctuated by pallid vocals from the dessicated throat of a wasted, strung-out murmuring man. At 20 minutes, the opening track (vague reminisces about a sojourn at a holiday camp, recalled through the aural equivalent of faded snapshots) is rather listless and inconclusive; only on the last cut do the sleepwalking band start to rouse themselves slightly. Apparently these five pieces were all improvised and taken from live concerts, and are said to be quite uncharacteristic of their studio recordings. Band member Tomek Mirt also did the pen and ink drawings on the cover.

Intervals (MONO32) is a team-up between Z’EV and Jason Kahn, both renowned for their innovative and ornery drumming and percussive work (although of course they do many other things as well). Two long pieces here recorded in Lausanne and Zürich in 2009, to which Kahn also lends his analogue synth. Kahn owns himself to be delighted to be playing alongside one of his heroes (Salt Of Heavy Metals was one of his favourite spins in the 1980s) and the two corresponded a few times before meeting up. Both performances come across as rather subdued and sluggish overall, but the production of unusual sounds is nothing short of uncanny; the second cut in particular conveys the feeling of being locked inside an oil drum that is slowly sinking to a depth of 60 fathoms.

The Neurobot record feels like a highly interesting proposition and I intend to spend more time unravelling its taciturn grooves. The trio of young men that produced P?tla Bohumína (MONO 030) may come out of the shadows equipped with the usual digital set-up of laptops, synth, computers and effects, but they also shroud themselves behind odd identities, namely Dr Kudlatz, Wolfram, and – my personal favourite – Facial Index. A turntablist, DJ Zmarszcki, joins them for the title track at end of CD. Spin the disc, and umpteen layers of fizzing incident start to fly in the air like so many strands of sweet honey, with gently pulsing loop structures and samples thrown in to a low-key mix that makes no logical sense at all. Inside, a sleeve note that alludes to urban desolation and the state between dreaming and waking, and various other mental conditions that have allowed these zoony Poles to create this open-ended mind-massage. Largely free from clichéd and over-familiar sounds, the record may not be a totally innovative contribution to the ever-expanding sub-genres of electronica, but at their best these three feel like they’re sorcerers weaving an obsessive spell rather than make a record. Love the cover image too; a knight’s helmet with a moustache built into the visor. Why?

In contrast to what we’ve heard so far, Michael Vorfeld‘s Flugangst (MONO031) is an extremely minimal utterance; seven pieces from 2007 recorded in Germany using percussion and stringed instruments alone. Slowly and patiently, this Berlin-based musician and visual artist attempts to populate the room with a variety of scrapes, thunks, and resonating creaks. Punctuated with quite a lot of silent or near-silent stretches, this is very testing work and is delivered in a rather solemn, serious tone.

Lastly, we have Dutch band Mekanik Kommando, described by the label as a “New Wave” combo (their roots lie in the 1980s) who have previously dabbled in electro-pop for their previous releases and now turn to making a sort of acoustic folk record with tinges of psychedelia, studio effects, and foreign noises. Sadly on Shadow of a Rose (CAT SUN CAT6) I find their song-writing skills are undistinguished, and some of these dippy quasi-pop tunes win the laurel wreath for sheer banality. But I like the spartan instrumental backings produced by these four, even if their mannered singing voices are a bit of an acquired taste – they manage to sound bored and strained at the same time. If inclined, you could seek out a copy of the special edition which arrives packed in a wooden box with a badge and a t-shirt.