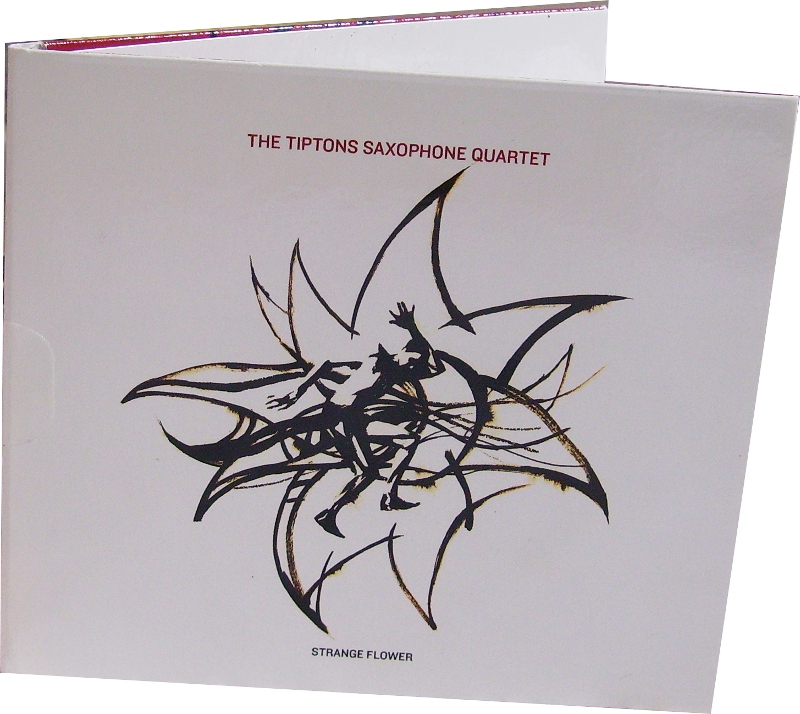 We’ve been sent quite a few saxophone-type records lately, so let’s get our lips into embouchure position and finger open those sticky valves to see what leaks out from the capacious bell…

Terrific experimental sax-work from French honker Bertrand Denzler on Tenor (POTLATCH P210). These three lengthy recorded explorations of mostly one-note monotony, entitled simply ‘Filters’, ‘Signals’ and ‘Airtube’ inside a sky-blue sleeve, present various aspects of his single-minded determination to venture into every possible dimension of his brassy friend, no nook left unscoured. “Harmonic layers, alterations and inner beats” and “multiphonic fragments” are the order of the day, along with efforts to “explore the tube resonance”. At first this may read like it’s overly intellectual, the work of a deconstructionist, or simply too process-heavy; and it may remind other listeners of the ongoing efforts of other brass and woodwind improvisers who, for quite some time now, have been refusing conventional musical improvisation in favour of a simplified, self-conscious demonstration of the instrument as a metal tube with air passing through it. However, Denzler’s record is much more loud, full-bodied and startling than many wispy puffs I’ve heard in this genre, and I like the way that his “purpose remains mysterious” as he executes these near-ceremonial exhalations. I’d like to think that our primitive ancestors approached a hollowed-out bone with the same mixture of awe and uncertainty as Denzler.

While finding primitive men is on the agenda, let’s note that Swedish sax player Mats Gustafsson is on fine blurting form on Barrel Fire (DRIP AUDIO DA00651), where he’s joined by Tommy Babin on bass, Kenton Loewen on drums, and the slightly unhinged electric guitarist Gord Grdina for these 2009 recordings made live at the Vancouver International jazz festival. The rhythm section generate as much manic punked-out energy as Sonic Youth used to manage once upon a time, while the instrumentation they use is perhaps not that far away from an Ornette session of the late 1970s. Meanwhile Gustafsson effortlessly displays his lion-roar and snarling overblowing styles with all the panache of a resurrected Coltrane mingled with just a hint of the anger of Archie Shepp. Benign easy-listening jazz this be not, and these hunting men are hell-bent on ripping out your jugular vein. The cover painting, depicting them as masked psychopaths armed with cleavers and skeletal forearms, confirms my bloodthirsty impression of this firebrand of music-noise. Grdina is definitely the co-star here, given plenty of space to shred his strings like an angry cougar on the attack; I see he’s credited with writing all but one of the compositions, and I’m tempted to look into the back catalogue of this wild Vancouver axeman.

Update 30/01/2011: Sorry, this record is of course credited to Gord Grdina Trio with Mats Gustafsson, as my own picture clearly shows. My misapprehension seems to imply that Grdina is playing second fiddle here, which was not my intention.

Linsey Wellman has a self-released collection of his solo alto sax recordings Ephemera, sent to us from Ottawa where he sometimes plays with local group Uzumaki. He’s certainly a confident player with a clean tone, and comfortable with many styles, but there’s nothing especially challenging on offer here; his music leans more towards the jazzy-melodic end of the improvising spectrum.

Some first-class tunes and arrangements by Tiptons Sax Quartet on Strange Flower (ZIPA! / SPOOT MUSIC NO NUMBER). The quartet is led by the wonderful Amy Denio (who is better known to me for her song work), along with Jessica Lurie, Sue Orfield and Tina Richerson, with Chris Stromquist drumming. The four gals have as much swagger and swing as any similar combo (e.g. Rova Saxophone Quartet) who are trying to find the voice of an entire orchestra in saxes of different weight and pitch, and the Tiptons also have much more delicacy and poise when it comes to squeezing elaborate detail and grace notes into these elegant charts. Everyone gets a chance to bring one of their own compositions to the table, and the record is characterised by a fun-loving eclectic mix of musical styles; Gospel, African, Klezmer and Bluegrass are just some of the items on the shopping list. When John Zorn, much as we love him, works in similar turf he tends to recruit a crack team of commandoes and goes about the job like a crazed war veteran on an assault mission; however, this record is much more approachable and friendly, and I’m sure if she’d been around at the time Amy Denio would have been first in line to be recruited by Charlie Haden or Carla Bley for one of their large-scale jazz orchestra projects.

Arrington De Dionyso frequently makes astonishing records which are too good to be true, thereby enthusing many and bringing numerous superlatives to the lips of enraptured fans (and to the pens of music writers). We’ve heard one of his solo records (bass clarinet drone and throat singing, always a great combo) and one by The Naked Future he made for ESP-Disk in 2009. Here’s one of his other groups, Old Time Relijun, with Songbook Vol. 1 (NORTHERN-SPY NSCD 002), which to be strict to today’s theme is not exclusively a saxophone record but with that tremendous drawing of an astral feline playing said instrument on the cover, how could I resist? Arrington does play the alto sax here, but he also wields clarinets, jew’s harp and guitar, and rasps his vocal-bizarro way across 25 short songs with the aid of bassist Aaron Hartman and drummer Bryce Panic. The first half of the album is 1996 studio recordings made on a four-track by this spiky group, with no overdubs and capturing all of their strange refusenik beatnik power as manifested on these curlicue-twist tunes with their snarled and shouty vocals. Not especially loud or manic (the drumming is constrained and precise as anything you’d hear at a school spelling bee), yet these songs, with lyrics by De Dionyso, convey a scary nightmarish force and their titles are heaped with animalistic and mythological symbols. Remainder of album gives us “select compositions in the original 4-track versions”, but to be honest I’ve read that phrase several times over and I’m not quite sure what it means. No matter, as I’ve heard enough here to recommend this CD to all good TSP readers and listeners, or indeed anyone who’s a fan of that short-lived but productive strain of human endeavour that produced such post-punk New Wave greats as The Pop Group or Lounge Lizards.