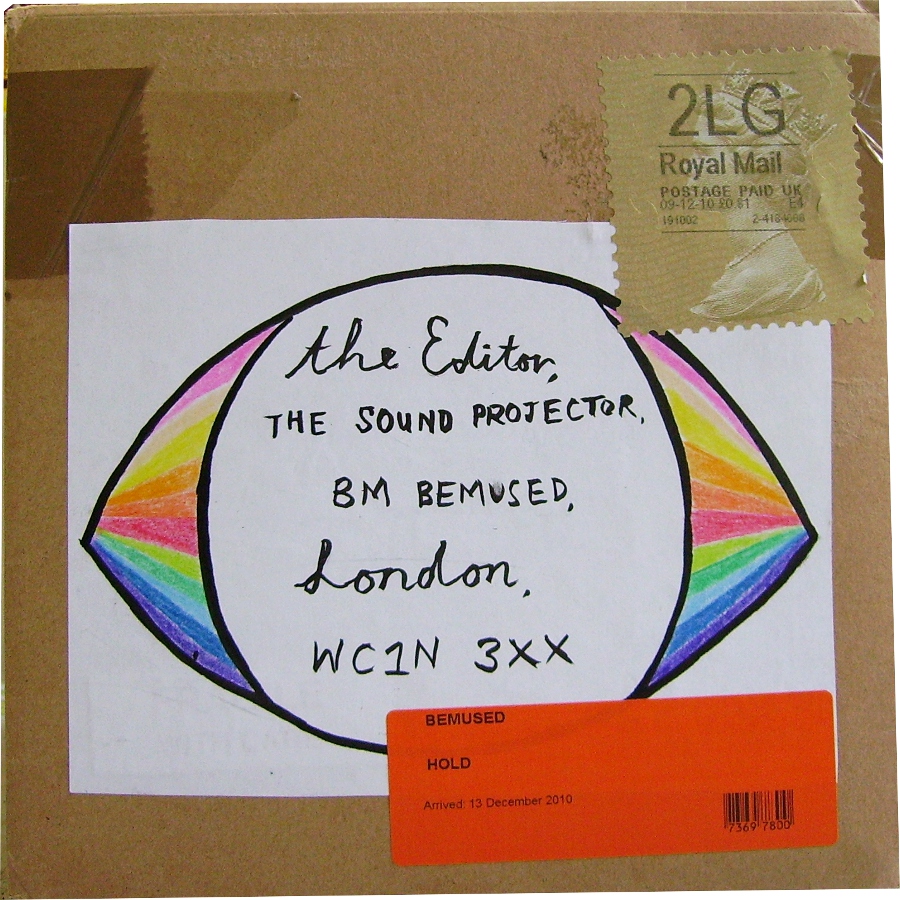 Nice home-made inventive and melodic item here from Beautiful Friend, which is the duo of Robert Horton and Les Shimmin who have been recording under this guise since 1996. Hello Rainbow Geeks (ANTI-GURU 005) is an impressive collection of songs and instrumentals where the duo play just about any instrument they can seize with their bear-paw like appendages (guitars, keyboards, percussion), and then proceed to enhance / disrupt the results by means of sampling, cut-ups, loops, echoes, studio distortions and filters, and additions of foreign detritus. At best, they produce some very pleasant and disorienting dreamy effects in this way. They seem especially proud of their “outsider lyrics” and “abstract beats”, and the latter element, applied in its fuzzy pastoral way, may endear this duo to fans of Portishead. Elsewhere, the delivery of the voices (half-sung, half-spoken, half muttered) puts me in mind of The Red Krayola’s early records. Very appealing and suffused with balmy sunshine vibes, a contemporary update on English psychedelia and the Canterbury scene. This arrived in December 2010; only 50 copies in the hand-painted and printed gatefold sleeve. The same label, you may recall, brought us Invisible Bees in 2008.

Olekranon is one of many Ryan Huber (from Indiana) projects, and {bilal} (HOUSEPIG HPIG-029 / INAM RECORDS) is as usual characterised by heavy beats, distorted electronics, and multiple layers of insane keyboard heaviness – a lively cross-breed of noise, rock and electronic music. I’d love to see inside this guy’s digital mixing desk, as I have a vision of a hard drive collapsing under the weight of several thousand strata of overdubs, and wheezing with the strain as it tries to respond to yet another filtering request. Huber’s profile could be in the ascent, as after years of CDR issues he now has a distribution deal with Housepig and a proper CD press with printed artworks. Fleshy, spidery blob paintings adorn the cover.

The Resipiscent label in San Francisco seem determined to unpick my brain, one cell at a time, through the medium of long-distance aural surgery. The latest step in this procedure is the normality-altering release by Nerfbau, a mysterious combo based in the Bay Area who intend to wreak havoc on an unsuspecting populace by means of their “double-headed cultural deconstruction audio machine” performances. Error Swarms (RESIPISCENT RSPT038) contains sixteen portions of their own peculiar brand of creeping electronic goop, with no indication of provenance, instrumentation, or context, and the deliberate ambiguity is reinforced by highly cryptic sleeve notes and puzzling titles. Nerfbau certainly take shapelessness to a new extreme, and not one of these sonic episodes has a definable end or beginning – instead the unpleasant slime just envelops you like so much Silly Putty. Occasionally, unintelligible and distorted vocalising may be stirred into the goulash, but the underlying “message” of this subversive non-music is deliberately kept very obscure. I think the long-term effects of allowing this slow oozing mess into your life could prove interesting. Outsize card folder arrives half-wrapped in a swathe of plastic and tied up with copper wire. Nasty, sickly, obsessive.

From the internet label Woe Betide Records we received a copy of their third release, The Cambridge Free Improvisation Society In Hell (WOE BETIDE 003). It’s quite good music, too. I’m very interested to learn that free improv has reached the point where Universities are forming societies enabling students to make music in this way, and it seems that CFIS feel they’re lagging behind Oxford, Birmingham and Cheltenham in their endeavours. Let’s hope we get to hear about some of these regional musicians after they graduate and that they present some competition to the prevailing improvisational landscape, which can at times appear a bit London-centric. Here, David Grundy, David Curtington, Nathan Bettany and Daniel Larwood play a number of conventional acoustic instruments (woodwinds, piano, guitar, percussion) with a smattering of electronic sparkle-dust from Grundy’s laptop; what’s impressive is how foreign and alien they make their instruments appear, refusing conventional timbres and effects. I keep hoping for a little more boldness and thrust in their approach, but maybe it’s the recording quality that falls a little short of conveying the full richness of their enthused exploits. They seem at their most agitated on the 18-minute ‘Hell’ which opens the disk, but ‘Close Encounters of the Fourth Kind’ displays more evidence of interaction and dynamics. The performance was part of a Dante project organised by the Professor of Italian and English literature at Robinson College, so be prepared to enter the “selva oscura” when you spin this.