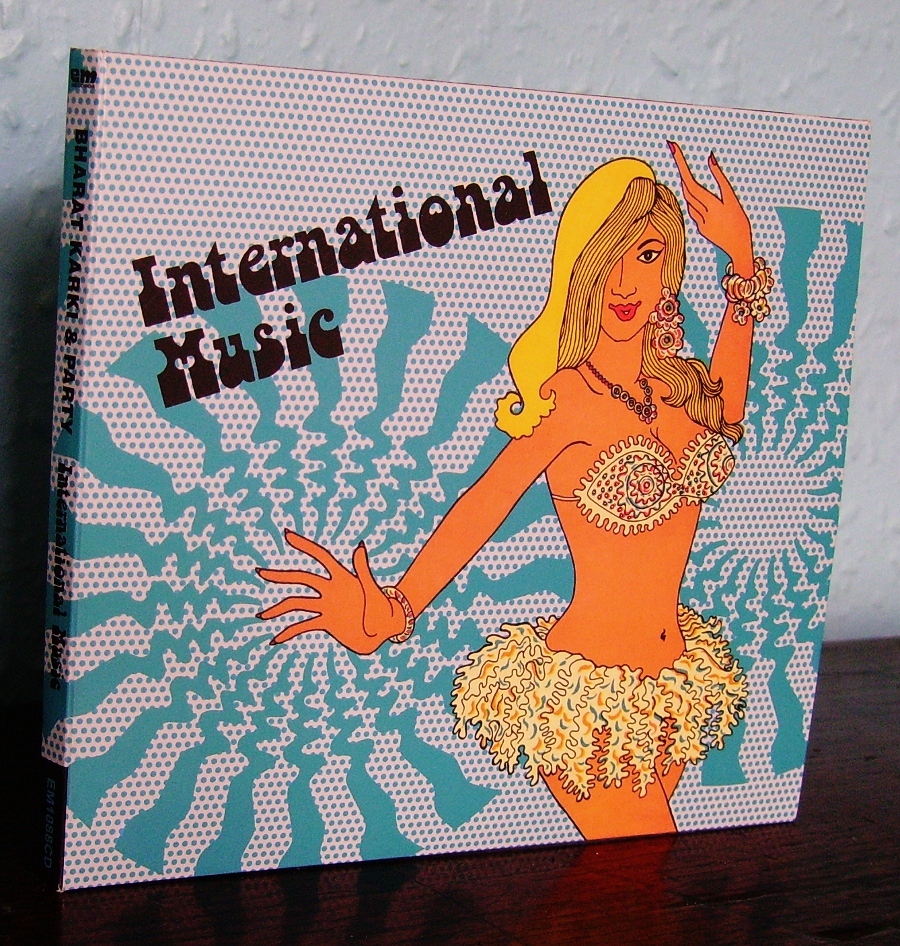 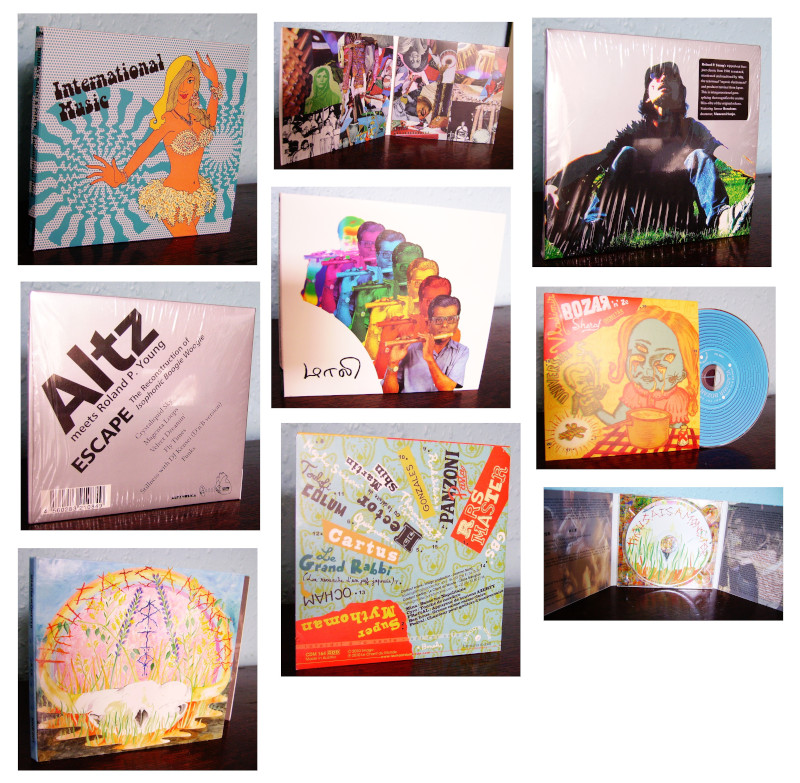 Got some very delectable items from the Japanese EM Records label, often a reliable source of enticing and exotic reissues of all stripe. I think these arrived around November 2010. International Music (EM RECORDS EM1088 CD) is credited to Bharat Karki and Party, comprises just 22 minutes of entertainment in eight sumptuous tracks of Indian pop music, and is adorned with a psychedelic bikini-clad Eastern dancing girl on the cover. Hard to resist. This was originally a 1978 private press LP, and the large group of musicians and singers are effectively making a fist of playing funky disco music on traditional Indian instruments, which means you get lots of sitars, enthused vocal whoops, and scads of exotic percussion, all mixed up with Farfisa organ, heavy bass and party-time guitar licks. The crazy every-which-way energy of the music is further reflected in the centre gatefold collage; apparently the team were also mixing Latin and Arabian music into the mix, perhaps for an additional shot at broader appeal and commercial success. Wild!

We were also sent a second copy of Roland P. Young’s glorious recent record Istet Serenade, which we noted here and in more detail in the current issue of the magazine. I’m still looking for Isophonic Boogie Woogie, Young’s notable item from some thirty years earlier, of which even the EM Records reissue is rare. For the time being here is Escape: The Reconstruction of Isophonic Boogie Woogie (EM1084CD), a studio assemblage put together by young and gifted Japanese beat merchant / producer / remixer Altz. In a nutshell the album aims to “magnify the cosmic bliss-vibe of the original release”; what we hear is some very inventive (and not unsympathetic) splicing and editing of Young’s original horn-blowing work, already highly unusual and forward-looking in its embrace of his own special approach to wild-eyed free-form blowing that represents a potentially strong new direction for Free Jazz, if only it had been more widely adopted. Altz weds his edits to dynamic and complex rhythm tracks, never once settling into mindless Techno mode, and is aided in this respect by Muneomi Senju who has drummed for Boredoms. Result: an exciting and sensuous slice of hot pizza. Normally I would keep a project like this at arm’s length, but I’m utterly enchanted by this spicy fruit salad of jazz, drones, beats, and electronic noise.

Also received Mali: Essential Recordings of Carnatic Bamboo Flute 1969-70 (EM1089DCD) by the flautist T.R. Mahalingham. This reissues two LPs of the work of the man nicknamed Mali, who was apparently a startling innovator in this particular strand of Indian classical music. A little out of my line, but it’s beautiful music beyond question, its grace emphasised by the quietness of the original recordings.

In no way related to the above is the odd release by Vladimir Bozar ‘n’ Ze Sheraf Orkestär. Universal Sprache (FRANCE LE CHANT DU MONDE CDM 164 CD) is the product of a French contemporary prog band which came together out of two other bands, one of them devoted mostly to covering Frank Zappa tunes, the other playing a dangerous strain of circus music, hopefully fit for the Grand Guignol version of the Cirque Du Soleil which, in my alternative universe, was quickly suppressed by the French authorities. This glorious record was made in Nice and Seattle and for a time only available on iTunes, but following their discovery the physical version has been around since 2009. The combo take some of the hallmarks of great modern prog, such as versatility, hyper-fast fingering and noodling on keyboards and guitars, very difficult time signatures, and razor-sharp dynamic turns that the late Zappa bands prided themselves on, taking the idea of “chops” into the Ninth Dimension. These hallmarks are wedded to a huge range of ethnic musical quotes and impressions, with vocals sung and squeaked by numerous singing contributors in grotesque voices which may be yabbering in pastiches of any language from Rumanian to Arabic, or actual tongues beyond my ken. Restless, hilarious and packed with insane details, this is the sort of “everything and the kitchen-sink” enterprise which ought to be tripping over itself like a parade of deformed circus animals, but instead succeeds with all the grace and deftness of a troupe of tumblers or acrobats. Me, I like it!

USAISAMONSTER arrived on 6th December 2010. On R.I.P. (NORTHERN SPY NSCD001) The core duo is Colin Langenus and Tom Hohmann, here joined by keyboard players Maxx Katz and Peter Schuette, and they perform brilliantly strange songs which I can only describe as updated Shaker hymns set to prog-rock rhythms and decorated with superb but understated instrumental prowess on guitars, keyboards, and flute. The highly poetical and intricate lyrics are printed in the digipak for your delectation, and while some of them shadow the path of “untamed nature” walked by Walt Whitman or Thoreau, other songs make a bid to connect imaginatively to elements of Native American heritage, as hinted at by the lovely cover painting. For a brief moment as I removed the shrink wrap on this item, I thought we might be in for another Pocahaunted variant with langourous mystical drones and chants, or some sort of free-strumming music in the mode of Valley Of Ashes. How wrong I was; these are well-crafted songs delivered with precision and fire in the playing, and stirring conviction in the singing, everything stamped with a very American larger-than-life capacity. Recommended.