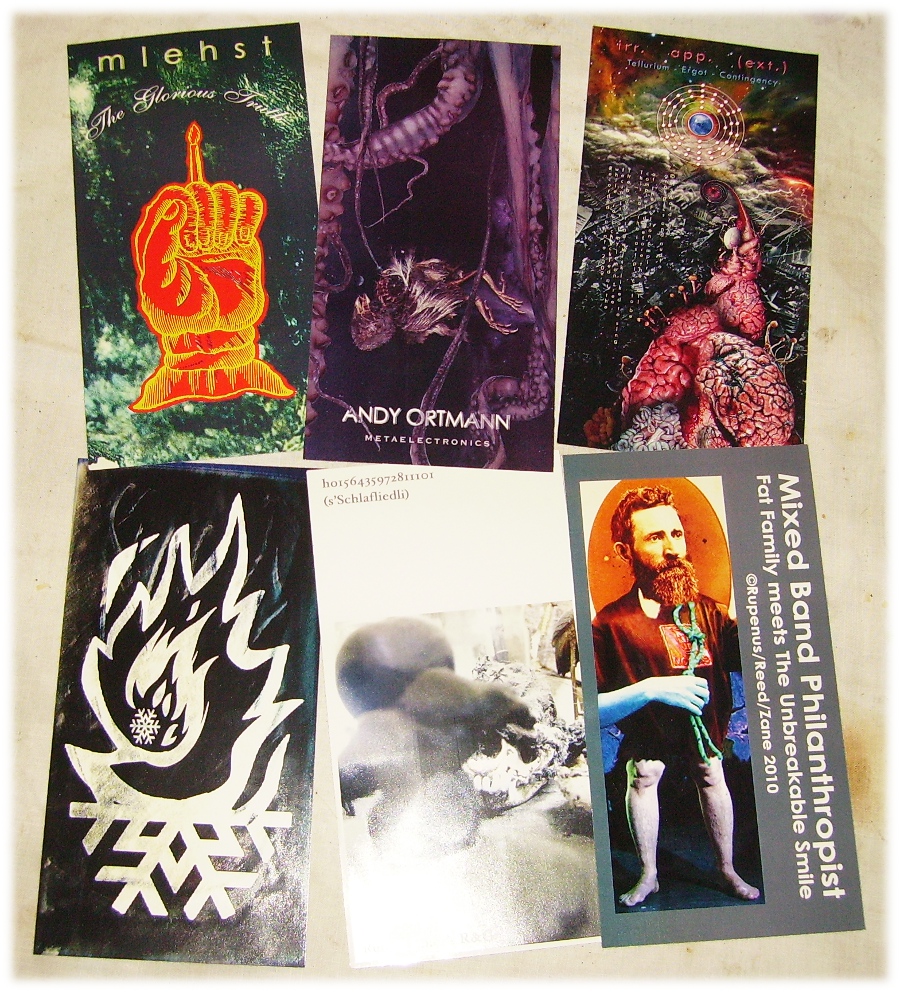 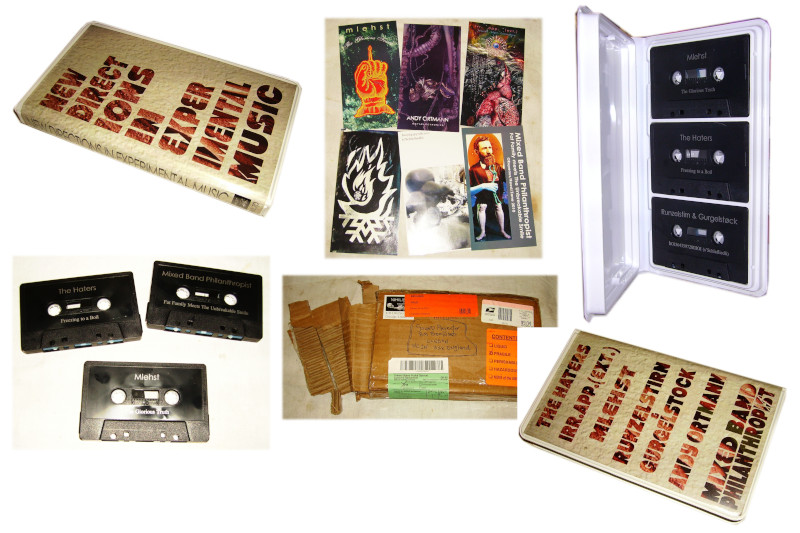 We received this splendidly packaged cassette box set from Andy Ortmann in July 2010, I think at the instigation of Richard Rupenus. Ortmann’s work is known to us as one half of Recorder Out Of Tune (with John Wiese), and he’s also owner-operator of the Nihilist Records label in Chicago. New Directions In Experimental Music (NIHIL 70) contains three split cassettes, thus presenting six discrete compositions from some of the heavy-hitters of what I take to be the international “Industrial Noise” cabal, a musical area I would not always elect to frequent out of choice, but events seem to be conspiring against my will. I’ve been exposed to more disturbing noise in the last few years than I would have thought possible…the cassettes are plain black with silver lettering packed in a padded box and six full-colour inserts round out the pack. I don’t know if it really can be said to represent “new directions” (some of these creators have been around for the last 30 years), but Ortmann has put together a very strong collection of wild electro-acoustic noise with barely an ounce of wastage on these compacted tapes.

Mlehst is the English act with a pedigree going back to 1991. ‘The Glorious Truth’ is what he offers us, along with a striking image of an old engraving of a Hand Of Glory. He posits a rather bleak outlook on life with his near-empty monotone electronic droning which passes through many filterings, as it shivers in the cold climate and struggles to hold on to a root note with paralysed fingers. ‘Metaelectronics’ is much more maximal, and Andy Ortmann displays a great deal of unusual invention within a very taut frame, using a mixture of found tapes, mechanical recordings (one of them is a dot matrix printer, methinks), and analogue synths tuned to an unpleasant setting. I like the way his piece deconstructs itself as it progresses, becoming increasingly less “musical” and more random towards the end, even though it does finish with a vaguely hopeful flourish of musical notes. He illustrates his work with a striking image of tentacles, tendrils, and the body of a dead bird, all tinted in lurid purple, inviting us to contemplate the strange and stark cruelty of nature.

irr. app. (ext.) works hard, but sadly still fails to make a favourable impression on me. His ‘Tellurium – Ergot – Contingency’ is a kinetic muddle of metallic rhythms and wayward whistling sounds, assembled in what strikes me as a random, unfocussed fashion. I found it irritating. His chosen image is an unappetising collage of viscera, brains and blood, sprouting forth from an urban hell as it strives to reach towards the sun with one of its coiled shoots. Except it’s not the sun, it’s a quasi-mystical circular device with a cloudy planet at the centre. The Haters‘ ‘Freezing To A Boil’ is much more successful musically and may even be the “winning” cut out of all six for me personally. It’s a very dense and concentrated construct of seething layers – it has the scalding heat of a thousand tea-kettles. The Haters throws his elements together like churning oceans of oil, water and lava in his reverbatory, and watches the results as he applies more heat to the sealed cannister. This intense episode is illustrated with a wordless glyph that cleverly combines universal symbols for snow and fire, and spirals to a centre where smaller versions of the glyphs are repeated.

The impression I get from what little I know of Runzelstirn and Gurglestøck‘s work is that this hard-to-identify act are dedicated to presenting absurdity in the most extreme forms they can muster, vis the routes of musical recordings and confrontational performance art. Even Samuel Beckett would have blanched at the lengths these Swiss clowns will go to in their plan to curdle the minds of sane men. The track here, usefully titled ‘h0156435972811101’, appears to be mostly the work of Rudolf Eb.er and it turns from the horrifying to the hilarious and back again, in the space of moments. Screams of men and women in distress are tempered with doorbells, ringing phones, mad laughter taken straight from the halls of Bedlam, and passages of difficult nerve-jangling discordant music. Wins my vote for the most disturbing contribution in the box, and it’s illustrated with a deliberately ambiguous photograph where a long-toothed skull is concealed by an eerie blob of shapeless proportions. Lastly we have Mixed Band Philanthropist, which in its current manifestation is a collaboration between Richard Rupenus, Stan Reed, and Allan Zane. ‘Fat Family Meets The Unbreakable Smile’ is a powerful jumble of cut-ups and fragments, sounds and samples taken from nameless sources and crudely slammed together in ways that make no sense. Much effort is expended here trying to unhinge the listener’s mind, disrupt the normal flow of linear thought. Impressively, the trio manage to sustain a terrible momentum and urgency with this piece, conveying the sensation that Belial himself is hard on your heels. A superb collage of old photographs and (I think) a votive object is making a savage swipe at the imagery of the Catholic Church, and is printed in acidic colours that you can almost taste.