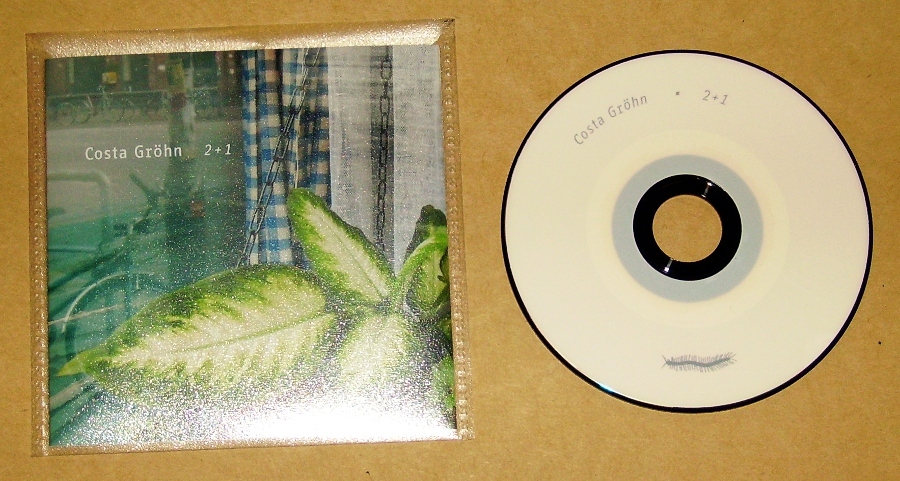 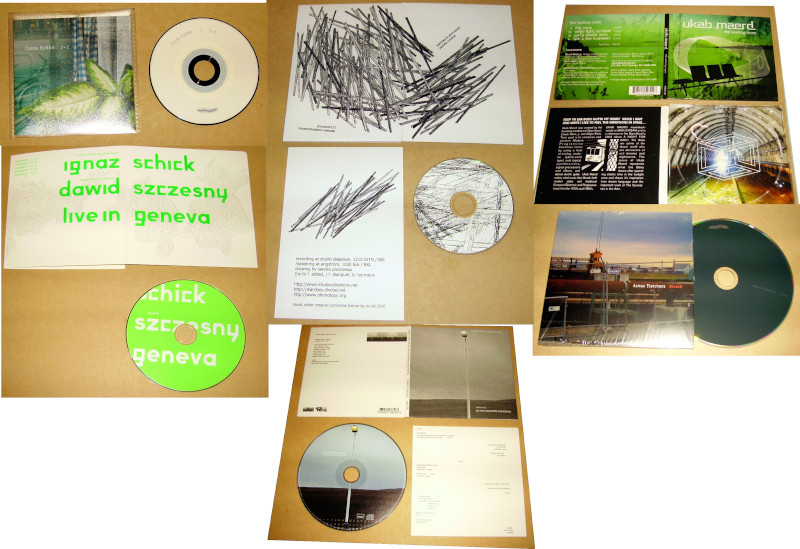 Another subdued outing from Ignaz Schick, this time performing with Dawid Szczesny on Live in Geneva (ZAREK 14). Schick provides mostly physical objects (turntables, bowed things, percussion) and Szczesny the electronic dimension with his laptop software synth. Mostly rather smooth and droney textures will await you here, though they do manage some abrasive moments. Only a few years ago you used to hear this sort of material in great abundance from Günter Müller and his pals on his label For4Ears, though many of his releases were much heavier on the “iPod fizz” effect. Maze cover art by Andreas Töpfer.

Franck Vigroux turns in a very convincing piece of modern dissonant compositional brouhaha on Broken Circles Live (D’AUTRES CORDES RECORDS DAC 191), performed here by the Ars Nova Ensemble Instrumental. Chamber pianist Matthew Bourne, guitarist Marc Ducret and singer Geraldine Keller all contribute improvisations to this strange disjunctive work. I just couldn’t accommodate it when this first arrived, but now I’m starting to dig the way it hops about from one musical domain to another with all the “freedom” that Luigi Nono implied, but rarely delivered on. Electronic music, prog rock, free improv, noise and loopy sprachsung opera are just some of the elements you can fish out from Vigroux’s capacious pond. Keller is particularly hard to ignore, but Ducret’s acidic guitar minimalism is also strong and invigorating. As to the striking cover image, the humble street light never looked so alien or menacing, perhaps another manifestation of Vigroux’s paranoid fears about modern urban life.

Ukab Maerd is a side project from core members of Djam Karet, those very talented nouveau prog-rocksters from California. On The Waiting Room (HC PRODUCTIONS HC016) the two players Oken Jr. and Ellett confine themselves to the possibilities of using analogue, modular and digital synths, which probably represents a fairly comprehensive coverage of all non-natural sound-generation devices on offer to the musician in the early 21st-century. For good measure, they also elect to transform electric guitar sounds much in the mould of Bill Nelson when he first discovered his guitar synth, and the great Richard Pinhas of Heldon contributes guitar loops to three tracks. Some fabulous “vitrual worlds” emerge which are almost big enough to roam inside for hours, and while the overall feel of the album is a shade too lacking in tension for me, there are some nice moments of wonkiness and oddery to be tracked down on ‘God’s Elastic Acre’. Note the witty pastiche of The Lamb Lies Down on Broadway‘s opening text on the inside cover there.

Diatribes and Phonotopy collaborate on Partielle D’Averse (INSUBORDINATIONS INSUBCDR10), the latest in a series of interesting team-ups from the Swiss duo of Cyril Bondi and D’Incise. Yann Leguay (Phonotopy) plays a “tennis cythar” and the “electric racket”, hopefully home-made instruments which seem to be two halves of an oblique whole occupying undefined turf midway between a sports gear shop and the heavy metal arena. Some 23 minutes of very busy activity, dominated by rather shapeless and scrapey doodling. Stay with it though, as this grumbly pattero-language from a microscopic dimension eventually starts to make sense in a broken, halting way.

Got a couple of “hissing Sydneys” from Gregory Büttner in Hamburg, both released on his 1000Füssler label. 2 + 1 (1000FUSSLER 016) is a short three-incher from Costa Gröhn, which is made up of layers of processed field recordings from his extensive collection (I get the feeling he’ll make a document every single time he leaves the house for a walk), with the addition of short and subtle samples from vinyl records. This technique seems over-familiar on the face of it, yet Gröhn’s results are delightful, inventive, and carefully considered; he is not out to waste our time with overlong or unnecessary statements, and I felt charmed to be in his company for 15 minutes. Interestingly, he’s a pastor at St John’s Church in Hamburg and his concert-installation-performance work may be just a sideline.

Abraum (1000FUSSLER 017) is by the great pioneer and innovator Asmus Tietchens. This hour-long suite is centred around the construction of a subway in Hamburg’s harbour area, and the documentation of same by Tietchens; to be more specific, he’s mostly interested in some steel tubes that are used to pump out sand, rubble and water resulting from the excavations. Indeed, he probably describes the works of this building site with more precision than the engineers who were awarded the contract. With this very extreme process art, the creator is I think largely concerned with making discoveries and observations from this very specific site and noting what he regards as unusual phenomena and events, regardless of the results on the disk. Determined to refuse any form of transcendence or sublimation, this is sound art right at the furthest reaches of pure documentary.