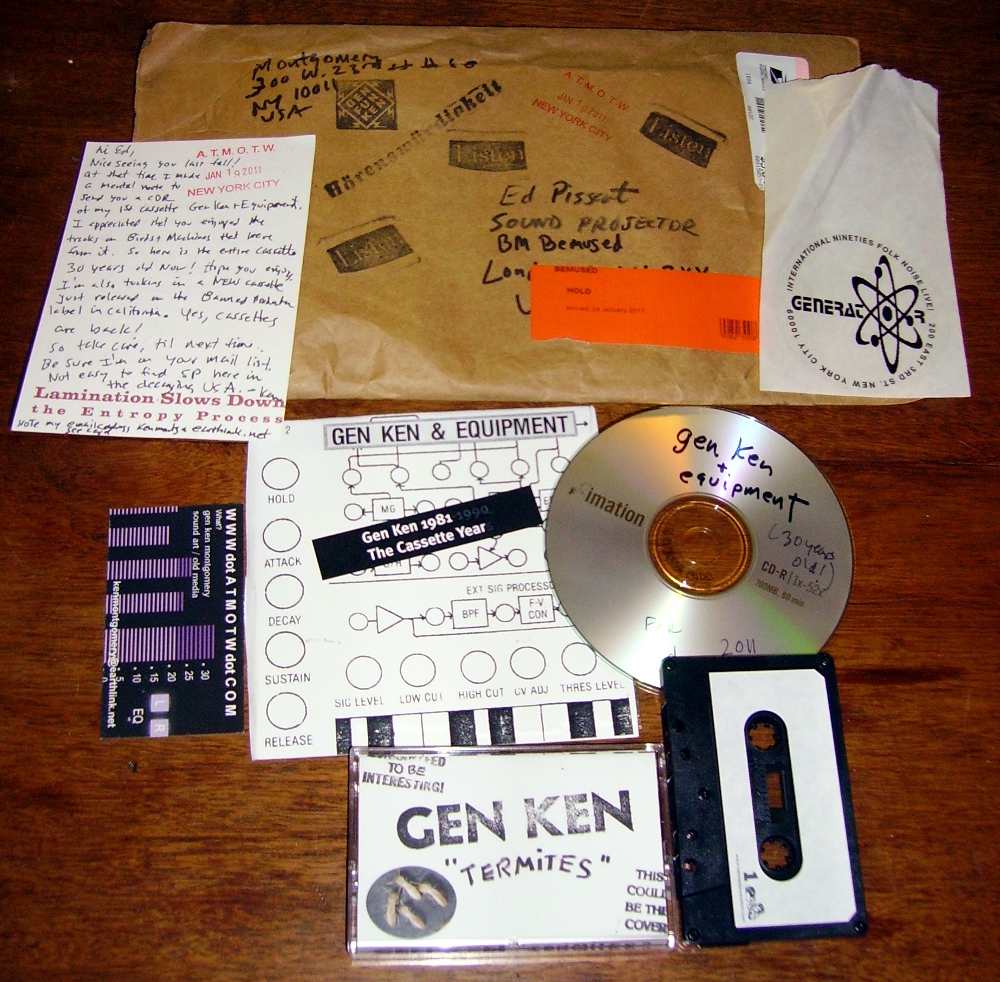 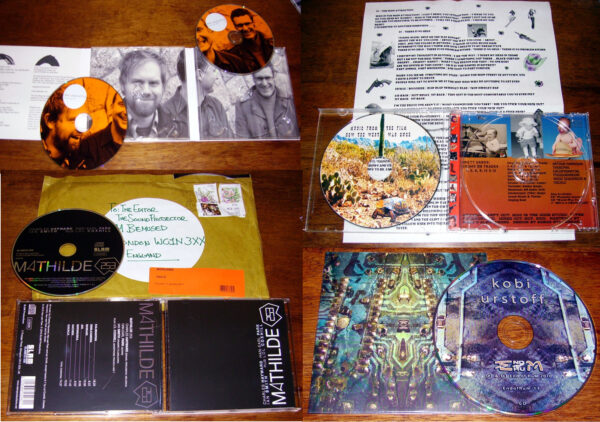 Always a pleasure to hear from Gen Ken Montgomery in NYC, the only man whom I would allow to persist with such a gross mis-spelling of my surname. It so happens we managed to meet up very briefly in London in the Autumn, and now he sends me a CDR version of Gen Ken & Equipment, a cassette tape he originally released in 1981, because I was so enthused about the extracts that appear on Birds + Machines. Also he sent a new tape called Termites (BP164) on Banned Production along with the affirmative declaration “Yes, cassettes are back!” Remember you read it here first. The Termites tape turns out to be two examples of location recording delivered with imagination and gentle quirky humour, giving it a real edge over the countless hours of dreary and earnest European field recordings I’ve had to endure of late. The 1981 recordings are near-classic examples of avant-fuzzed minimal synth pop, rendered with drum machines, distortion effects, cheap keyboards and low-rent electronics, and hearing it is like taking a trip back to a golden age when Triangle and The Borgias were the worst things on UK television. I realise that plenty examples of this genre of music were created during those days of bedroom variants of The Human League and Depeche Mode, but I enjoy Ken’s wayward and open-ended approach to the style. You genuinely never know where a song is going to go next.

Mathilde 253 (SLAM PRODUCTIONS SLAMCD 528) features two of my favourite musicians, Charles Hayward and Lol Coxhill playing together in the same group, plus Ian Smith the trumpeter from London Improvisers’ Orchestra and the guitarist Han-Earl Park. On CD of same title we hear seven pieces they performed live at Cafe Oto last April. The real strength of the work is when the individual voices begin to shine, as they do on ‘Aachen’ for example – some savourable moments of interlining lines from Coxhill’s liquid fruit-juice sax and Smith’s horn. Park manages some imaginatively dissonant barbedly-wire phrases and false-harmonic scatterings from his detuned axe on ‘Similkameen’, placing him very much in the Bailey mould, but that’s not a bad thing. Hayward puts in tons of hard work on his drum kit to keep up with the changing dynamics, and executes almost every paradiddle in the drummer’s manual on the long track ‘Kalimantan’ in his efforts to derail the collective train and steer the ship’s company over stony ground. Aye, the ingenuity and invention of these combined performances is impressive, even if the album suffers slightly from a rather “samey” sound throughout.

Another bonkers release by Music From The Film, the American duo who brought us World War Tree in 2009. This time Gary Young and Arthur Harrison are joined by drummer Brett Gross on some tracks, as they demolish preconceptions and dissolve stylistic barriers on How The West Was Once (NO NUMBER), a cranky and gnarly item which they regard as a “slightly more rock-oriented” release. Most of the instrumentation on these nutso cuts is performed by Young, who makes no distinction between a musical instrument and a power tool or common household object so long as he can play it in some way. As he thrashes away with his surreal choice of objects in a very mad way, Harrison attempts to add shape to the tunes and songs with his Theremin and Cacophonator. This oddball release is not without its charms, but I get the feeling that MFTF never really know when to stop piling on the absurdity; “just one more overdub” appears to be their guiding motto, as they reach for the remote control on that vibrating chair they found at a thrift store.

The Norwegian take on Kosmische and space-rock is well manifested by Kobi on their Urstoff (ENDOFHUM 13) album, which also exists as a double LP in a gatefold sleeve. We heard from Kobi before in 2009, but the acousticks release was mainly a compilation of droney music collaborations put together by the main man Kai Mikalsen. The band here are a quintet playing with a replete cosmic-rock plateful of instruments, including many guitars, organs, synths and groovular 1970s effects pedals buckling under the pressure of many Norwegian feet; and I’m pleased to note familiar names Petter Flaten Eilertsen and Fredrik Ness Sevendal in the band. Not a man among them but doesn’t also play in a side project, and if you can trip the names of Dip Apple, Ka, Love Hz, Phonoloid and Slowburn off your tongue at a cocktail party in Hampstead, you’ll be esteemed a hipper dude than most. The overall sound of the album is distinctive and spaced-out fer sure, but if you’re seeking more development and dynamics from your quota of avant-rock, you may be baffled by the oblique and meandering nature of these performances. But we should expect no less from a member of the Origami Arktika collective, of course.

From Vancouver, Aeroplane Trio play excellent semi-melodic free jazz tunes somewhat in the mode of the early Ornette, and they also deliver fractured and desolate pieces of scrapey noise episodes on Naranja Ha (DRIP AUDIO DA00647). For the latter mode, the musical saw of bassist Russell Sholberg adds a fine dimension of creepy atmosphere that some Theremin players spend their lives trying to achieve. Some cuts allow trumpeter JP Carter the space to riff his way through jazz history with considerable skill, though he’s a shade too polite for this listener, never quite cutting loose with an angry atonal blast. Aeroplane Trio work best for me when they join together on the massed effort to produce slightly gloomy and uncertain moments of mixed-up free-noise drone and scrape, and as such they might share some commonality with label-mates Subtle Lip Can. The second disk in this package is a DVD documenting live performances at Ironworks.