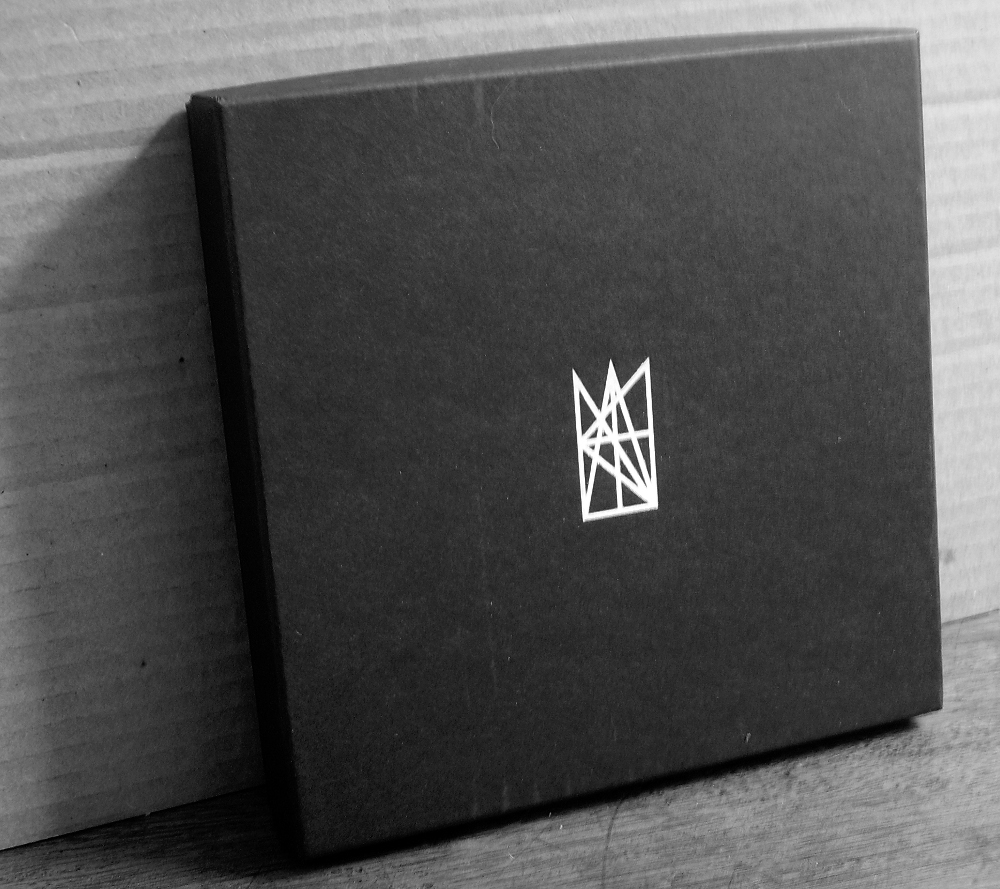 From Fang Bomb in Sweden (arrived late January 2011) we have a double-cassette box by Neghantil called 1990-1996 (FANG BOMB FB015), presented in a rather stern and foreboding package; flip the lid from the box and you have a set of 6-by-6 art prints suggesting various uncertain and paranoid mental states using collage, xerox and monochrome printing, then discover two cassette tapes in a foam surround, plus a metal gewgaw embedded…everywhere we see the mascot of Neghantil, a geometric doodad that might represent what the Psychic TV emblem would grow into if you left it inside a factory chimney overnight. This collection turns out to be the earliest recorded music of Ronnie Sundin, that Swedish electronic sound creator whose work we have noted in previous issue of the mag…this even predates Bad Kharma, his 1995 project which was mostly about extreme noise and tape collage. Then later on he went under the name rsundin for a few lower-case music records which were extremely quiet and puzzling and often themed on the ideas of sleep and dreams.

Underground music listeners who want to keep digging further into the archaeology and history of this genre of experimentation, particularly as released on cassettes, continue to be well-served. In 2009 we had the fabulous Musiikkivyöry release from a disaffected Finn who was making music in the early 1980s that could scorch your eyebrows with its palpable alienation. Likewise Neghantil ticks a lot of the requisite boxes: home recordings, sparse instruments, Korg synths, broken delay unit, tape loops and collage, four-track overdubbing, and a clear obsession with 1980s Industrial music. Sundin didn’t even have his own musical instruments to hand, so most of the gear was borrowed from friends. None of this detracts one iota from the power of the music here, which clearly springs from a heartfelt need and years of bottled-up energies. Driven to create, he sets about his work like a coiled snake let loose in a low-tech factory full of metal die-stampers. He can do the relentless pounding mode with great conviction, and never neglects to keep the music as grey and monochromatic as the accompanying images, but other things also come across to me; he is capable of the sort of delicacy and subtlety which would characterise his later work, and never lets the noise-trip intoxicate him to the degree that the machines take full control. In addition, we have to note Sundin’s assurance and conviction that is evident through most of these recordings; if they really are his first efforts, he should have been mighty proud of them. It’s as though he knew exactly what results he wanted to achieve, and kept working away at the devices until he could bend their mechanical arms to do his bidding. But it’s also exploratory, with some of the results unfinished, and characterised by a sense of innocence: “It was a fun, spontaneous if perhaps a bit unfocused period,” says Sundin today, “and some of these recordings were made with a somewhat ironic attitude.”

Equally ironic perhaps that although he intended making a cassette release out of these sessions, he never got around to doing so, and this Fang Bomb publication represents the first appearance for this material which has been safely stored in Sundin’s personal archive. In addition to the 13 tracks from 1990-1993 that presumably would have passed muster as an album, we have a second tape with rehearsal tapes (interesting, though nowhere near as focussed as the shorter pieces) and a long 1996 work called ‘Industrial Training Camp’, which contains harrowing blasts of distorted and blistering electronic doom-drone, forlorn bass guitar strums, and pallid percussive elements. The visuals for the package are by Neghantil and Nullvoid (i.e. Thomas Ekelund of Dead Letters Spell Out Dead Words) and this release is another welcome addition to my growing collection of Swedish electronic gloom, whose distinctive flavour I am coming to appreciate more each day. “I wish I’d made more of this stuff,” says Sundin, reflecting about his first musical efforts some twenty years later. So do we, Ronnie!